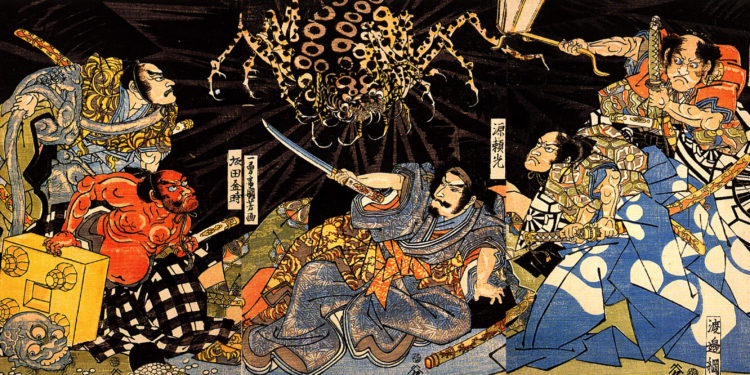 Welcome back to the STORM EDGE; THE ADVENTURES IN THE EIGHT ISLES and part 2 of History of the Eight Isles. For Part 1, click here. 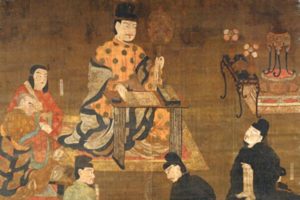 The Time of Peace and Serenity

As the Great Harmony was instated and trade with the Dragon Emperor in the continent as well as the Holy Kingdoms of the Shimmering Peninsula opened up, a number of now repented Orcs and their Half-Orc descendants returned to the mainland seeking spiritual serenity. Many numbers of them, notably the monk Master Mao and cleric Master Kohya, brought back with them the teachings of The Lotus Wheel which merged with the Divine Way of Eight Million Gods, spreading amongst the populace. This was soon followed by the establishment of a new capital in Keika, modeled after the great Dragon Empire’s capital city Liu-Yan. It seemed the Great Harmony would last forever. However, not all were content with the status quo in The Eight Isles. As the saying goes, the brighter the light, the deeper the shadow. Dark clouds were brewing in the North…

After the pact of The Great Harmony, many new races were born from the union between humans and beings from other planes. Most notably Dragonborn (called Ryujin in The Eight Isles), Genesi, and in smaller numbers Goliaths. Only one of the Old Races did not join in mixing with others: Dwarves. Proud and stubborn people, they were never quite satisfied with how the other races, who did nothing during the Orc invasion, were so quick to forgive the invaders. Especially when the Dwarves were the ones that took on the brunt of the Orc invasion. Discontent grew amongst them over the years and they were able to find a common ally in the Pallid Elves; elves of Drow heritage who were shunned by the Elves from Ukushi because of their ancestry. It seemed to the Northerners that while the Human and the Half-Elf nobles in the capital rose in power through marrying into the Imperial family (Michina of Fujikra clan had even rose to the position of Emperor Regent and Premier), they were being discounted and their great sacrifices, from which they still suffered, forgotten.

The Fall of the Emperor and the Rise of the Shogun

Making the matters worse, a Plague of Predation (Therianthropy curses: chiefly Were-Tiger, Were-Hound and other forms of beastly curses) began to ravage the Eight Isles soon after the Great Harmony. It was rumored to have a continental origin. Some said it was the Orcs that brought the curse, some blamed the Lotus Wheel Monks and some even blamed the Tieflings. Whatever the truth, those living with the cursed bloodline (Shifters) were driven out of the capital to live as pariah in the untamed Northeastern regions of Amato, giving a seed to the Northern revolt where Dwarves and Pallid Elves joined the cause of those Shifters who were considered to be savages. The capital responded by sending an army of samurai, many of them half-orcs bearing old grudges, establishing a station in the Eastern territories and Sei-I-Tai-Shogun, the great savage conquering general, given the highest title for Samurai.

The Samurai quickly claimed the North lands and then the South as more revolt occurred. This time from a section of Elven separatists teaming up with Orcs and even Goblinoids that swarmed from the peninsula. Revolts kept popping up as some Samurai, unhappy with their treatment and reward for their service, joined cause with the local insurgents they were supposed to suppress. This in turn created the need for more Samurai forces; giving rise to local samurai lords.

As the Samurai class rose in power, many battles were waged between powerful Samurai clans, notably between the disgraced Seigen clan and the then-ruling Heiga clan under the Advisor Kiyokado (whose nephew claimed that anyone not of the Heiga was not a person). This ended with the ruin of Heiga and death of a child emperor born of Heiga blood. This led to the power struggle between the Samurai led by Shogun and nobles still loyal to the Emperor. Eventually, after a bloody conflict that saw the deaths of Emperors as well as Shoguns, the political power shifted to the Samurai class and the Shogun (now held by Ashika clan) became the de facto ruler of The Eight Isles. Yet the Angel Emperor and the Nobles still held great influence in The Eight Isles. Though the Angelic bloodline may have thinned and the artifacts of the Imperial family lost and scattered, the Angel Emperor still remained the supreme authority in the land, at least in title. 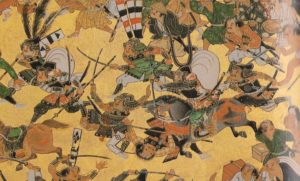 The Demonic War and the Warring States Period

For centuries, most of the conflicts involved battles between humanoid warlords. As bloody as they were, none of the conflicts had reached the existential threat of the early days … until the relaxing of the law of inheritance caused a massive increase in strife involving the Imperial Family, The Shogun family, and powerful Regent families. This latest conflict came to be known as the Demonic War. The Isles were divided between the forces of the Black Noble Shogen Saikawa (an Aasimar of Imperial blood) and the Red Priest Shuren Yamagi (A red Goliath Paladin of great renown); both sides backing claims in each of the powerful families. The war continued for over a decade, splitting the Shogun family and causing a wide rift among the various warlords. Neither side would relent. Perhaps the loss of Storm Edge in the past war and Oni scheming in shadows might have contributed to it. Regardless of the cause, the war escalated, culminating in a great Devastation that turned the capital into a ruin shrouded in mist where the dead and demons wander. The exact source of the mist is not entirely known. Some conjecture that in desperation, one of the sides summoned a demon lord, or opened a portal to the Abyss. This has made the Imperial Palace a place totally isolated from the outside world. The previous magic protections of the capital continued to shield the residents inside, and some business continued to be conducted with the outside world via hidden portals.

The total breakdown of the central power gave rise to the current age. One where anyone with enough cunning or ambition can rise in rank by any means necessary (often by killing their own lord). The local warlords that had been gaining power have started to act as kings of their own respective lands. To aid themselves in their many conflicts with each other, they have started importing arms from outside The Eight Isles, inviting Western influence, notably the Paltagan missionaries and their steel plated knights who wander the land preaching the Word of their savior.

The world is changing.

To learn about the world of The Eight Isles, click here.

How to create a story through your ...