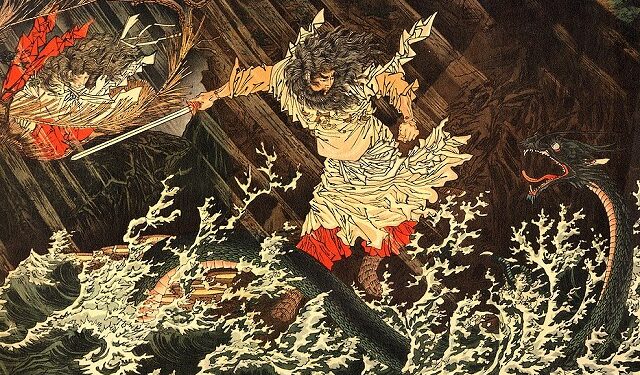 Welcome back to the world of STORM EDGE: THE ADVENTURES IN EIGHT ISLES! This week, we are delving deeper into the mythologies and gods worshipped among the denizens of The Eight Isles.

Let’s begin at, well, the beginning. 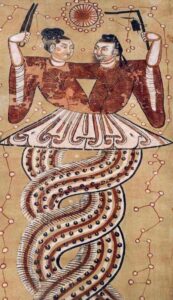 ORIGIN: Eula the Weaver and Izagi the Shepherd

As previously noted, those of The Eight Isles believe in Eight Million Gods, the infinite number of deities from big gods like those of celestial order and natural elements to small gods that inhabits cross roads and long living creatures and objects that have gained divine powers. It is generally understood the greater a god’s power, the more numerical their names, which has helped incorporating figures from different faiths into their way of gods. Though each faith tells of the origin of universe differently, they generally share the idea of a Divine Pair that was given the task of creating a firmament by an overpower being (often described as a Will of Light or Cosmic Tree). This Divine Pair, said to be sister and brother deities with human like upper bodies and serpentine lower bodies intertwining, were most commonly known by the names Eula the Weaver and Izagi the Shepherd. Together, the Divine Pair shaped and formed this world – Eula would weave existence out from chaotic materials of Ethereal Plane, weaving them into the fabric of magic and Izagi will shepherd them together and assign them laws to be governed by.

Their children, original divine beings of immense size and powers (known as Juggernauts) would form beings in their images and those in turn would create smaller being in their images and so on, all under guidance of Eula and Izagi (it is said that Eula had her hands in creating the primal humanoid that has become varied in shapes by hands of each deities).  All was going smoothly until two most powerful of the Juggernauts – the prism giant Daidaara and the nine-headed dragon Kuzuru – started fighting for the dominance of their kinds. This Divine War has spread across the prime material plane, involving the forces from other planes too, culminating in the tearing of the firmament (Giants and Dragons to this day blame the others for who has caused this).  This resulted in Aberrations from Far Realm entering the material plane and flooding it with defilement and chaos. Enraged and desperate to save the world they created, the Divine Pair stripped five elemental colors from the prism giant, turning him into a translucent spiritual being it is now, and separated the nine-heads of Kuzuru, using her long body and the giants’ colors to hold up the firmament and saw the tear shut. A little hole that was left was plugged using the slain body of a great volcanic dragon that has instigated the whole war, thus creating The Eight Isles.

Completing this task exhausted Eula’s powers, and thus she has become one with the earth, while her soul sunk in deep slumber pulling all around her and creating bottomless Abyss (Called Naraku) to expunge herself of the defilement (this is how many Demons came to be – in particular, Marilith are said to be the dark reflection of Eula as they most resemble Eula in shape).  It is said her dreams and anguish became Feywild and Shadowfell, respectively, while her life force rose to become an divine entity and mother of all Feys and Immortal Sages known as Joumu. Losing his companion plunged Izagi into a deep sorrow, causing his body to become one with the sky while his consciousness fragmented. His Anger and Sorrow sunk low and rigid became what is known as Hell. His conscience, on the other hand, has merged with the primal humanoid to become a god of death and judgment. This god, Yama, rule over the border of life and death at the shore of Sanzu River and guard the material planes from devils of Nine Hells (called Jigoku) that sprung from his defilement. Finally, Izagi’s blood fell on to the world in a great cleansing outpour, clearing away remaining Aberrant forces and pushing them into the depth of seas, creating vast cavernous plane of Underdark in the process. And from where the heavenly rain fell on the earthly rocks, Immortal Sages rose into beings.

Because The Eight Isles hold animistic view of gods, any being of great powers can be considered gods. Many Feys, Monsters, Genies, Dragons and even powerful Eladrin and Undead can be considered gods, anything that can become patrons for Warlocks can be worshipped and often called Little Gods. However, these are beings categorized within Greater, Intermediate or Lesser Deities that can either have influence over their followers or be powerful patrons. 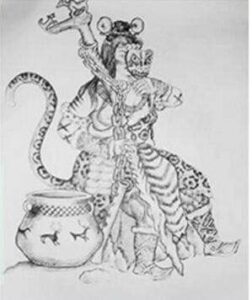 As noted above, the Juggernauts are one of the first gods born of/created by the Divine Pair. Juggernauts are all Greater Deities of immense powers that resides and rule over their respective Outer Planes. Most of them do not interfere with going of Material Planes except to counter the influence of other Juggernauts, though there are of course exceptions.

JOUMU: Mother of Creation. Said to have face of beautiful matron and ferocious tigeress, Joumu embodies the raw, natural creative powers of Eula. Her powers are immense and can be extremely unpredictable, both positive or negative and stands beyond the judgement of good and evil.

YAMA: God of Judgment. Yama, born from Izagi’s conscience is concerned with knowing all it could so it can make the best judgement and will be impartial to any that breaks the law of natural orders, especially against undead and fiends. His powers are always rigid and precise.

DAIDAARA: God of Mountains and Spirits. Progenitor of all Horned Giants, this prism giant has lost its body in the war against the dragons and now it roams over earth at night, giving protection to blessing to those in mountains and lands, in hope of redeeming the sin of being the cause of his mother’s death. He despises Undead as they remind him of what became of his mother.

MATERU-AKI: Sun Goddess. Oldest child to the Divine Pair and embodiment of the sunlight, this shining beauty bestow life and light to all creations and worshipped everywhere the sun shines. She seldom come down from her domain but often sends messengers to aid her worshippers. 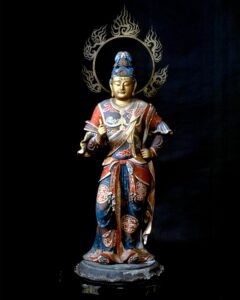 SUSANO: God of Storm and Might. The First born of Daidaara and king among all giants, Susano is a hero god and wielder of tempest and magic. Known to have been the holder of Storm Edge, imbuing the blade with his power, he often causes strife with his temper, yet also rules with compassion.

BRAHMINDRA: God of Victory and Truth. King among the Lotus Wheel pantheon and youngest of Eula and Izagi, Brahmindra seek out the eternal truth and the evil to bring down his righteous lightning bolt upon. He often rides shining elephant in chase after his foe

Below table shows the list of deities described above with their alignments, domain and symbols. This will be updated for part 2.

Continue to Part 2 from here.