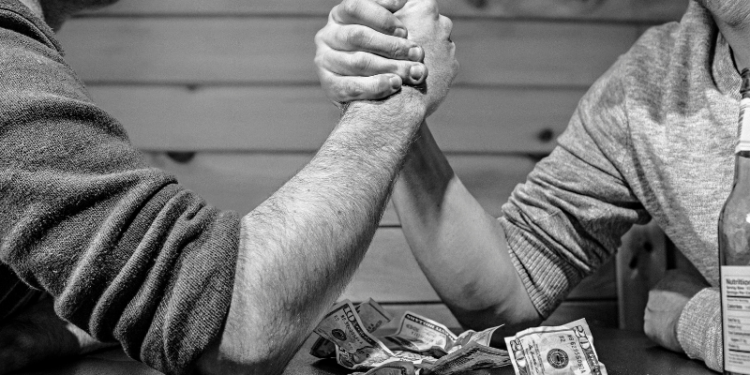 Any good story should have conflict, but not every conflict should be resolved with violence. While Dungeons & Dragons offer tons of options for combat, the non-combat ways to resolve conflict are often forgotten. These are harder to make mechanical, but skill checks and roleplaying can make them just as satisfying as blowing up a bandit with a well-timed Shatter.

All conflict revolves around two (or more) competing wants. The battleground these wants fight on can be internal, or between characters, or even between a character and nature. Let’s dive a little deeper into these conflict types and how you can use them in a session.

This types of conflict are a great way to build tension and create a memorable session by offering two competing options to the PCs. Internal conflict is a great complication to introduce when needing to notch up the tension in a session.

In order to create this kind of conflict, you can offer two or more options that each appeal to different values and wants that the PCs have.

Perhaps a character’s main quest is to destroy an ancient evil, and they will always help innocents. What happens when doing one means losing an opportunity to do the other? If helping innocents means letting the villain escape, but capturing the villain means the innocents die what does the PC chose?

The key to implementing this kind of conflict is to know what values are important to your PCs, and forcing them to prioritize them. Don’t be surprised if the PCs find a way to meet both — in fact such ingenuity should be rewarded!

This is the classic kind of conflict in Dnd, PCs versus bandits and such, but not every conflict should come to blows. In fact, I like to treat combat as the last resort when a conflict can’t be resolved with more peaceful means.

Bandits after all don’t want to die, and neither do most creatures in the world. There are some monsters like zombies and devils that will dive into combat and probably can’t be reasoned with, but that doesn’t mean that combat should be the only way to resolve it. Zombies can be distracted and devils might be repelled.

Give your PCs options in a fight so that combat doesn’t just become a slugfest. And give opportunities for them to shine in a fight — it is all about them, after all.

Pitting your PCs against the forces of nature is perfect for a campaign in which the environment it takes place in has a distinct personality. Ocean campaigns, treks across deep deserts or misty jungles can benefit from challenges born from the landscape.

Here is where the often neglected survival skill comes into play. Also encourage inventive uses of other skills and spells, from creating lures for prey with illusion magic to using the performance skill of a bard to calm a storm.

Instead of beginning each encounter with an initiative role, what would happen if persuasion or deception began an encounter. Or even skills like animal handling, survival, or history.

These checks can give the players information about how to drive away a creature instead of murdering it, or calming it so that it can be relocated elsewhere.

Encourage players to make inventive use of their skills in an encounter to find novel ways of resolving them. When building a character damage output is important, but because Dungeons & Dragons is a tabletop roleplaying game, you don’t have to drop a monster to 0 hp to defeat it like in a video game. And who knows? Creatures who are shown mercy may become valuable allies in the future.

Roleplay remains the most powerful option in Dungeons & Dragons. No spell can compare to the power of earnest roleplaying. Roleplaying is distinct from acting, in that players need not embody their characters or say exactly what they say, but should try to have their characters act in a way that is truthful to that character.

Good roleplaying is not about accents or costumes, but about making inspired in-character choices. A priest with a strict code of conduct should be rewarded when they stick to that code despite the party wanting to go against it. That reward could be inspiration or something more.

Encourage roleplaying in an encounter and your sessions will be more than a wargame. It’ll be Dungeons & Dragons.

Which 3 Classic D&D Settings are Coming ...