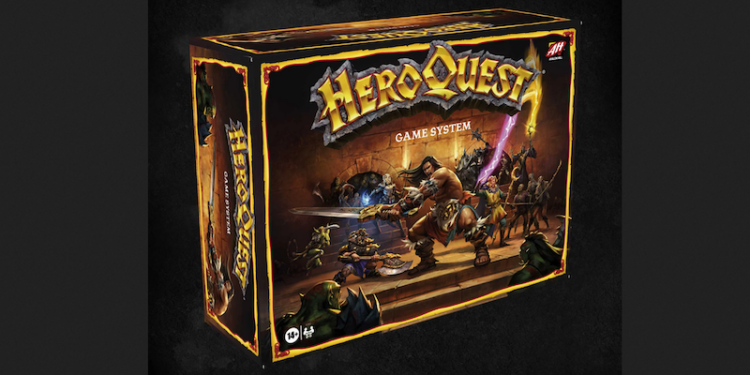 Hasbro has been teasing us with a countdown for HeroQuest for a while now. So the news was released, and we are shown a crowd-funding effort with a $1M USD goal. It took a little time (less than a day), and they easily reached that goal, and are at $1.4 Million! From what I see they have not changed much. Which is good!. Just a few tweaks to the rules, new scenarios, updated artwork, 3D sculpts, and highly detailed miniatures. Very well done indeed. I hope to see more details released as we get closer to the end of the crowd-funding effort in November.

There are several goals that they’ve identified as they progress through the crowd-funding, and the first stretch goal has been unlocked. We received a lot of pictures of concept art and below is a gallery of all of the concept parts of the game. There is more to be seen at the crowd-funding page. The ship date might be late 2021? 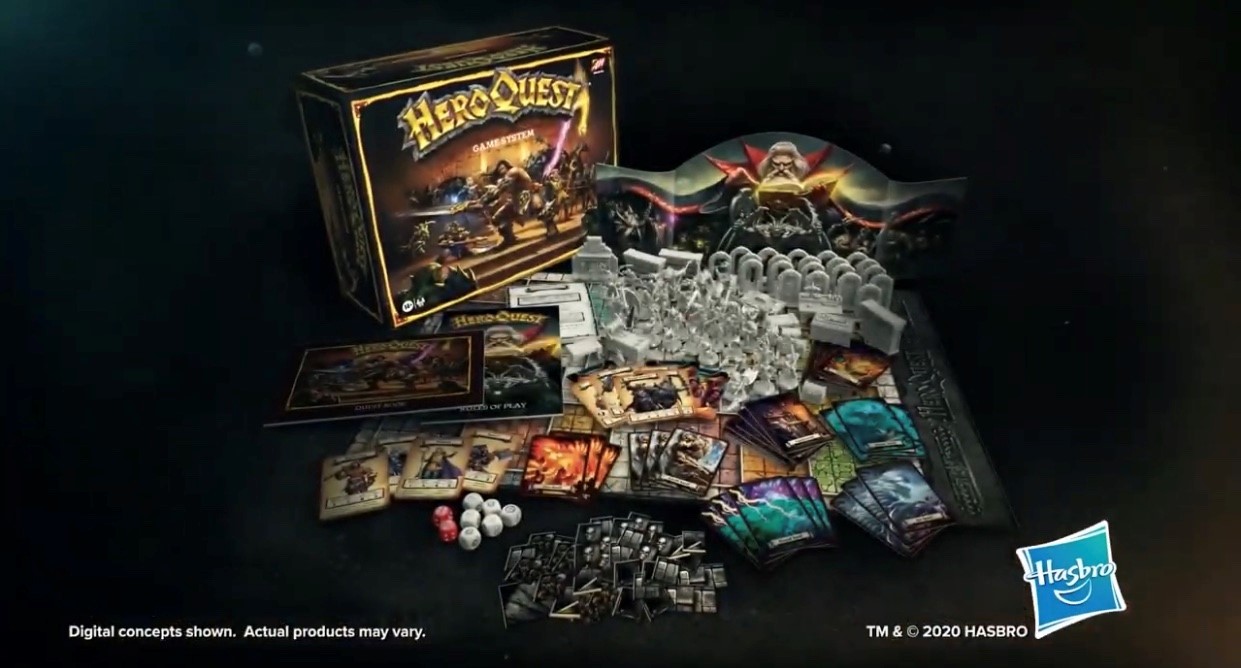 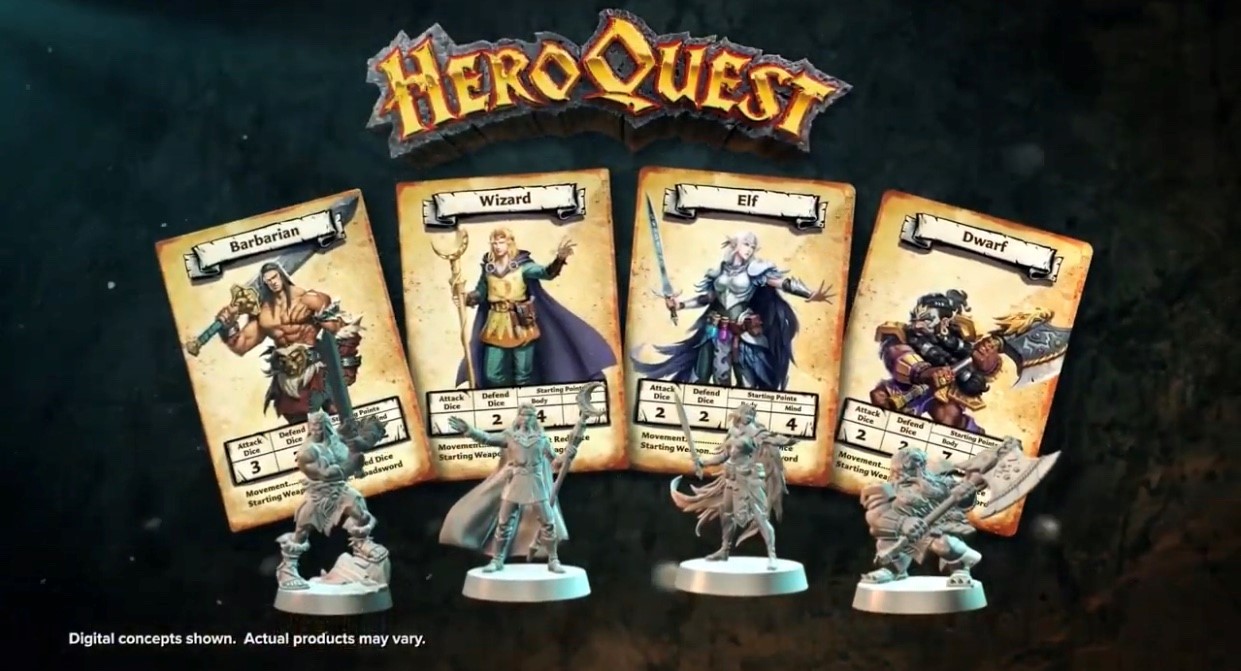 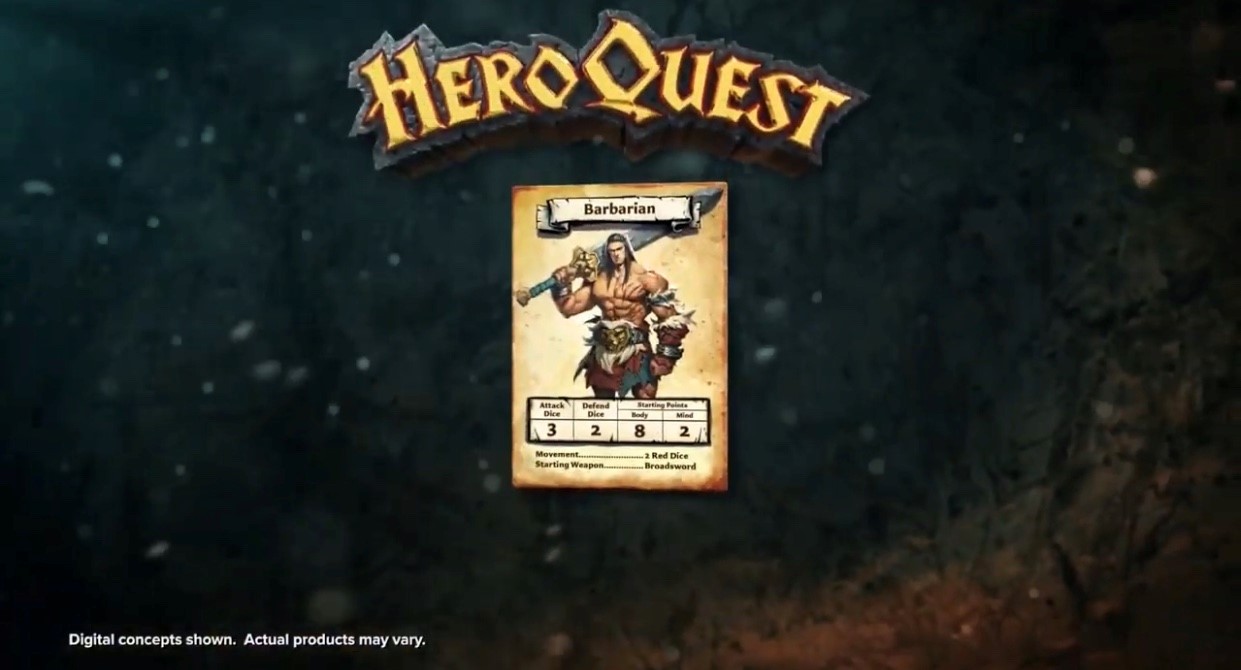 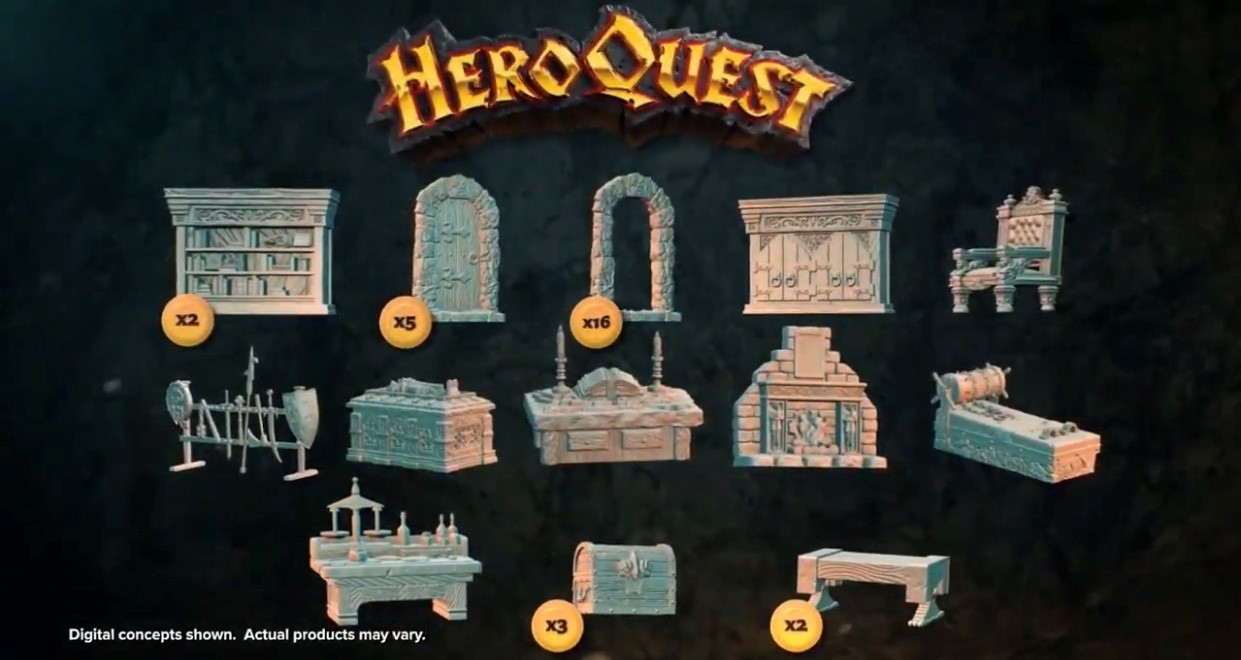 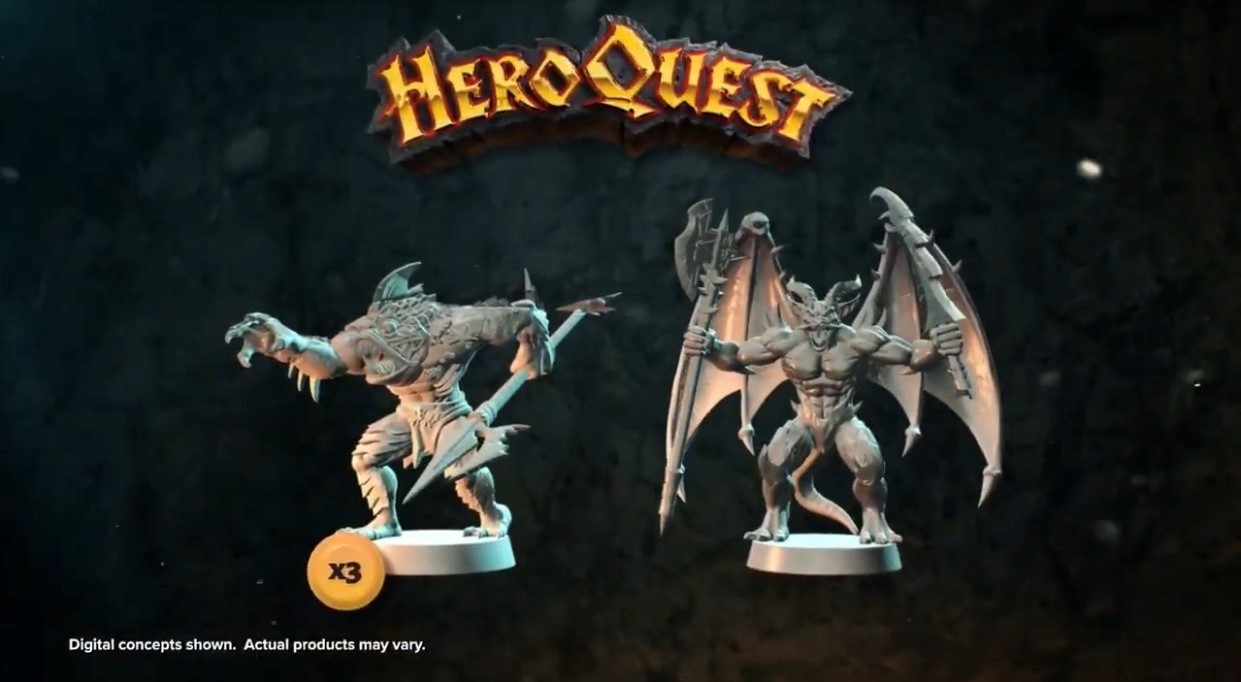 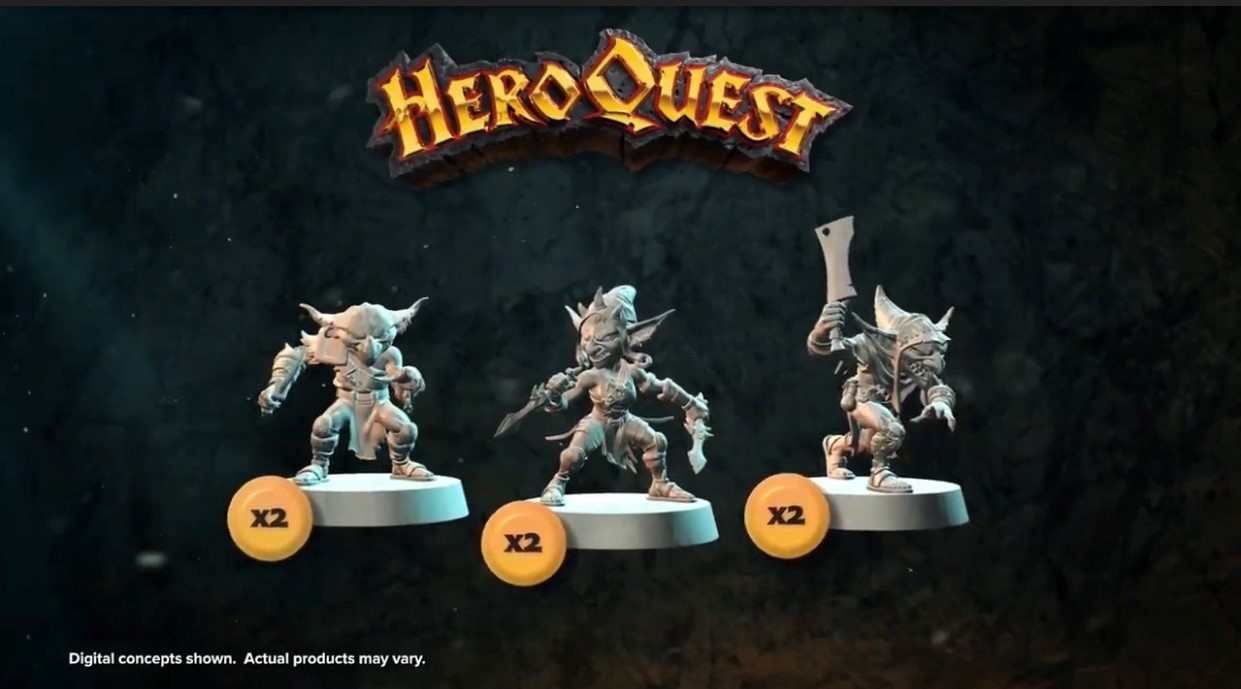 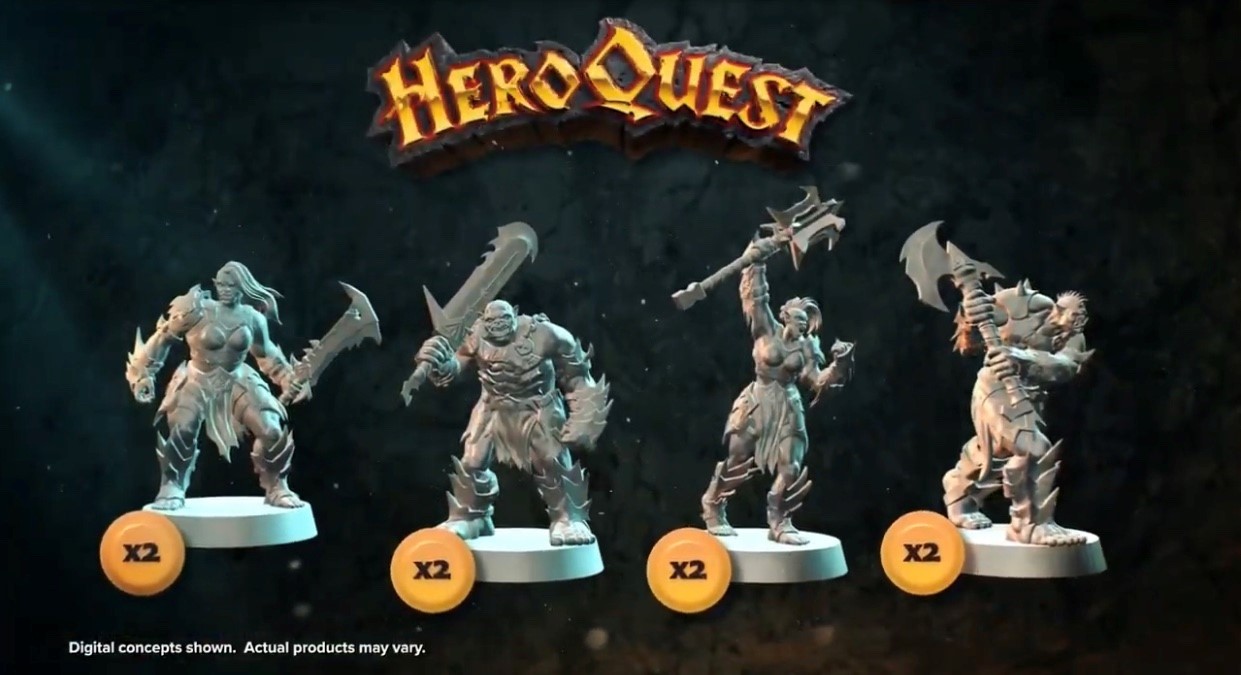 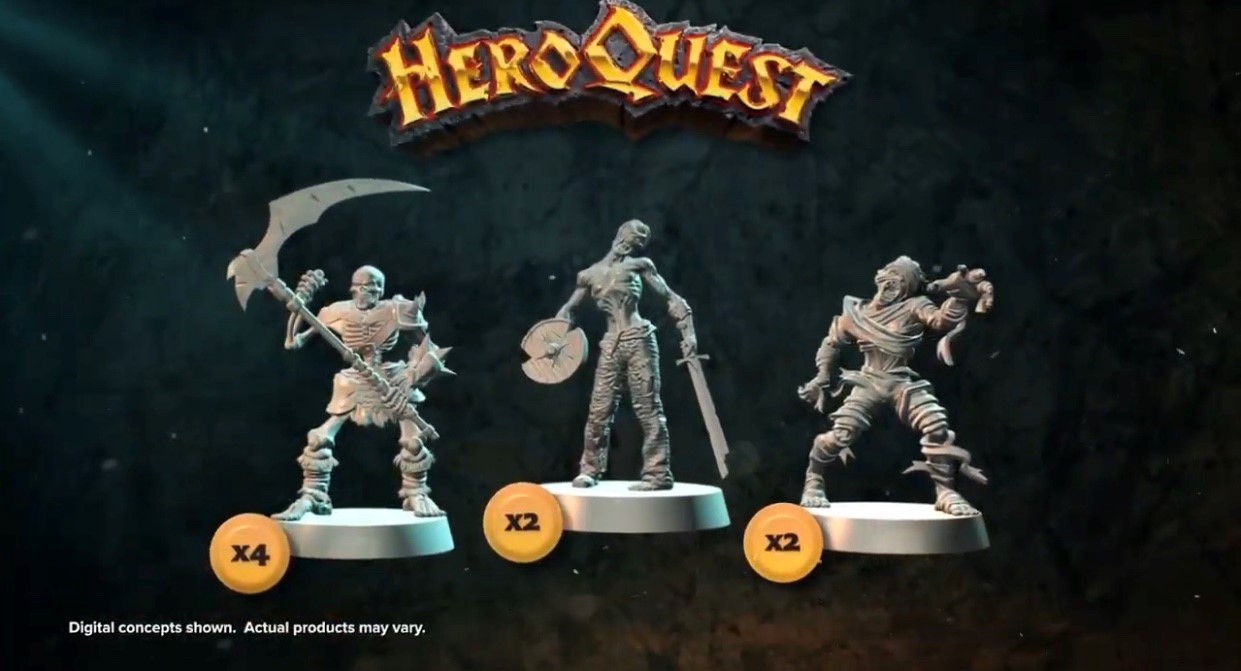 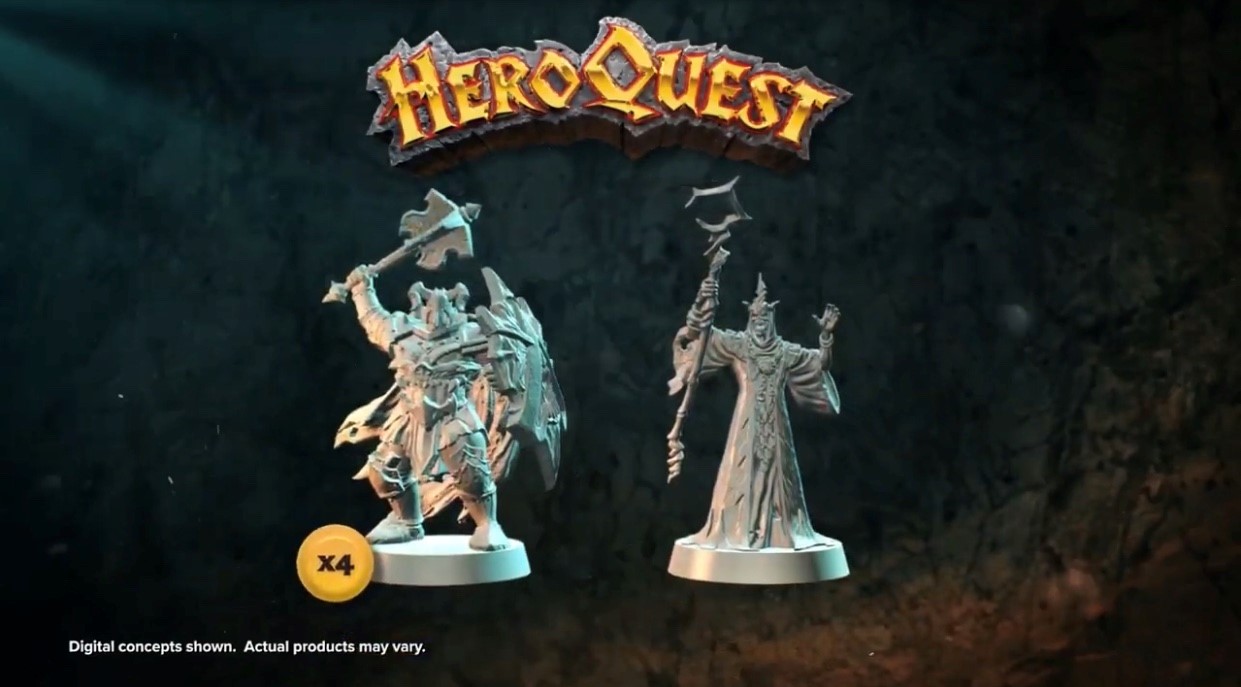 The game looks rather good, if not Great. I am happy about the box size because my original HeroQuest doesn’t fit in my gaming shelves. It’s too long. I have it on the top with all of my  Axis & Allies game versions. Here’s a Sizzle video that you might not have seen:

Below is the press release that we received from Hasbro. Mythic tier seems the best deal. The press release gives a lot of details on the game. It answers a lot of questions. But there is more. There is a panel today at the Hasbro PulseCon (it starts in only a few hours) that will give even more information about the upcoming game. Excite!

PAWTUCKET, RI – September 22, 2020 – Hasbro, Inc. (NASDAQ:HAS) announced today the official re-launch of HeroQuest, an epic, high-fantasy, role-playing board game made in 1989 where the fate of the world is in the players’ hands. The game will be marketed under Avalon Hill, a subsidiary of Hasbro, Inc. and leading brand in tabletop and strategy games. Relaunching through Hasbro’s crowdfunding platform, HasLab, this updated version of the game will feature new art, premium miniature figures and exclusive quest books for an enhanced gameplay experience and increased collectability. Fans can back the project starting today through 11:59pm ET on November 6.

For a detailed first look at the game, Hasbro PulseCon – a virtual event that gives fans unprecedented access to their favorite Hasbro brands – will feature a panel exclusively for HeroQuest this Friday, September 25. The panel will feature members of the Avalon Hill Brand and Design Team, as well as two special guests: actor, director, writer, producer and HeroQuest fan, Joe Manganiello and the lead designer of the original HeroQuest, Steve Baker. More in-depth information on the available offerings as well as some exciting surprises and reveals for the relaunch will be shared with fans during the event. You can tune-in to the panel on Hasbro Pulse YouTube on Friday, September 25.

“There’s a powerful nostalgia that surrounds HeroQuest, and a gameplay experience that is back in style, making it the perfect time to bring back this epic brand,” says Jeff Anderson, Senior Vice President and General Manager, Hasbro Gaming. “HasLab creates the perfect avenue to deliver something directly to the fans and makes the community an integral part of the relaunch.”

HasLab is a Hasbro Pulse crowdfunding platform that aims to put dream products into the hands of fans. With fan support, the goal is to make products of varying price points and scale that are highly coveted items fans have been clamoring for, which now includes HeroQuest. There will be two tiers of the game available through HasLab:

Mythic Tier – Available for $149.99, this tier includes everything from the core HeroQuest game system, plus two expansion packs (Return of the WitchLord, Kellar’s Keep), two exclusive figures (Mentor, The WitchLord) and the ability to receive additional components and exclusive offerings through different tier unlocks, which are not available at the Heroic Tier.

At the bottom of the crowd-funding page, Hasbro lists some of the designers. I am very happy that they brought on Stephen Baker to help with the relaunch of HeroQuest. Stephen is the original HeroQuest creator from Milton Bradley UK. And then I took real notice that a great RPG game designer was included in the design team for the game, Teos Abadia. Teos is great and has a very LONG list of accomplishments and RPG design credentials. Great choice for including in this effort. Nikki Dawes‘ artwork is SUPERB! I love everything she has done. WOW!!! Shauna Nakasone was also included in the list of designers, I don’t know much about them, and I’m looking forward to learning more. Shauna has a twitter account that I’ve started following.

And just for fun. Here is a very funny video on the original HeroQuest is here.
The Best thing about HeroQuest? The Gargoyle!! :