There aren’t a lot of things that could pull me away from my current freelancing work to get a weekly article out – sorry, beloved readers! – but Unearthed Arcana was that thing. Surprise!

Today we’re getting two new subclasses: the Way of the Ascendant Dragon monk and the Drakewarden ranger conclave. (I will give up on “conclave” as the subclass name for rangers when you pry it from my cold, dead hands.)

Oh, and this should all be post-Tasha content, in case that wasn’t obvious.

It was eventually going to be necessary to have a dragon-themed monk subclass. The idea could make one of the greatest martial-arts movies of all time, though I’m not cruising through all of the 3.5e monk prestige classes to prove the point. Not today, Satan Tiamat.

Well, this is awesome as hell. The Monk with the Dragon Tattoo is the quirky-investigator-spy-kung-fu adventure I didn’t know I needed. This is a clear power increase over a lot of the other energy-based monk subclasses (Four Elements and Sun Soul spring to mind), but those are lackluster anyway. It’s hard to guess how the positioning will work out for escalating the damage you can deal with Breath of the Dragon, but I don’t think this will prove to be any more powerful than Open Hand. More versatile… yeah, probably?

Okay, what if you had a ranger with a companion – stay with me here, I know I’m blowing your mind – and it was… a dungeon?

No, strike that, I meant: a dragon?

Well, sort of a dragon. Even a young dragon is too much. How about a drake, instead? 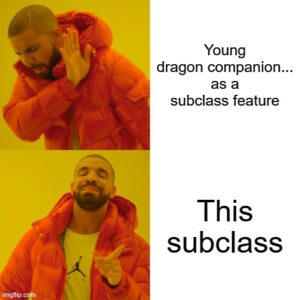 Weyr going to get through this subclass together. I think you’ll be Impressed. The byline on this article credits Dan Dillon, with Jeremy Crawford, Ben Petrisor, Taymoor Rehman, and James Wyatt, and they deserve a gold Red Star for this subclass, in my opinion.

If you’ve followed the Thread of my comments, you’ve probably figured out that I like this a lot. In addition to being mechanically solid on its own, it also has laser-focused appeal for young new players who love the How to Train Your Dragon franchise and… less young… players who got into fantasy on another fantasy series.

Save Your Campaign from the Holidays