D&D Beyond integrates Nerdarchy’s Out of the Box 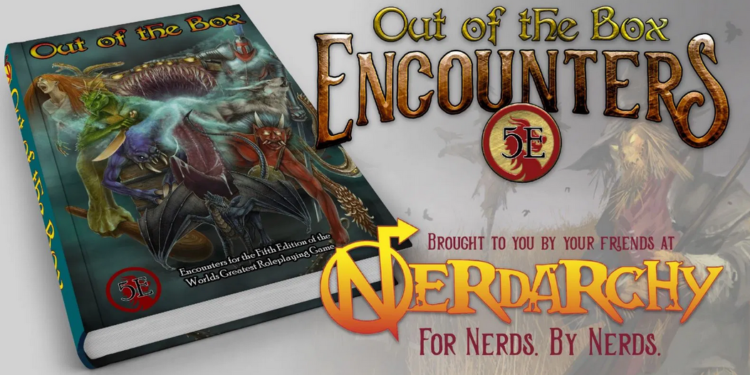 I wanted to post this press release from our friends over at Nerdarchy. Out of the Box is an excellent resource and it is interesting to see D&D Beyond start to expand its reach to third-party material beyond its partnerships with Critical Role and Acquisitions Incorporated. Here is the press release.

Delivering on another of the many stretch goals developed during Nerdarchy’s first Kickstarter, Out of the Box: Encounters for Fifth Edition, we’re thrilled to announce the D&D Beyond integration is complete.

The fantastic development team, led by Adam Bradford, VP of Tabletop Gaming for Fandom, took the material from the book and created the official Nerdarchy portal on D&D Beyond! The encounters from our spectacularly successful Kickstarter utilize the digital toolset’s Encounter Builder feature. This gives players the power to drop encounters right into their campaign and use the Combat Tracker to manage the characters and creatures engaged with each dynamic scenario.

The Kickstarter campaign took off much faster and grew much larger than any of us at Nerdarchy anticipated. The stretch goals we’d planned unlocked very quickly and we
brainstormed so many more during the live campaign. When the idea of integration with D&D Beyond came up no one even had an idea what this could mean. The Encounter Builder and
similar features were bullet points on a development roadmap but we floated the idea to the folks from D&D Beyond and they agreed to work something out with us because of course they
did — they’re awesome people!

When they came back to us not too long ago to show what they’d come up with we were blown away. We’re still blown away! The development created a portal all right, and plunging into it
leads to a unique area of the D&D Beyond site where Nerdarchy’s Out of the Box finds a home. Because of the nature of not only the Encounter Builder but the portal page itself the content is not behind any sort of paywall or restriction. Instead players can discover a summary for each encounter with a link to the Encounter Builder version. All of the customized creatures are
represented along with their cohorts from the Fifth Edition Standard Reference Document. Users can add these encounters to their own collections to run with the D&D Beyond Combat Tracker by importing the player characters from their existing campaigns.

There’s a few very important things to note about Out of the Box integration with D&D Beyond. First and most importantly is users must be logged into D&D Beyond to visit the portal page, otherwise they’ll get a 404 error. Once there and exploring the individual encounters players familiar with the Out of the Box book will notice the text from the encounters like Description, Complications and so forth are not embedded in the D&D Beyond version, nor are the maps or illustrations. The D&D Beyond website doesn’t support this scope of detail or additional media content at this time so while players can explore the combat side of each encounter they’ll have to rely on their digital or physical versions of the book for the bulk of the material.

We are so incredibly proud to share Out of the Box’s home at D&D Beyond with the tabletop roleplaying game community. Since these encounters only incorporate a portion of the full material we’re happy to invite anyone and everyone to visit the portal page and explore the encounters there. Astute Out of the Box fans will notice there are a small handful of encounters not represented here. This is because those select few do not entail any encounters with other creatures and since there’s no assumption of any combat scenario, which the Encounter Builder and Combat Tracker manage, those encounters could not be included in a meaningful or useful way.

All this said, the only thing left to do is invite you to visit Nerdarchy’s Out of the Box: Encounters for Fifth Edition through their amazing portal page at D&D Beyond right here.

Out of the Box product line at Nerdarchy the Store or on Fantasy Grounds.

Using Monsters Beyond Their Statblock: Naga