Using Monsters Beyond Their Statblock: Naga 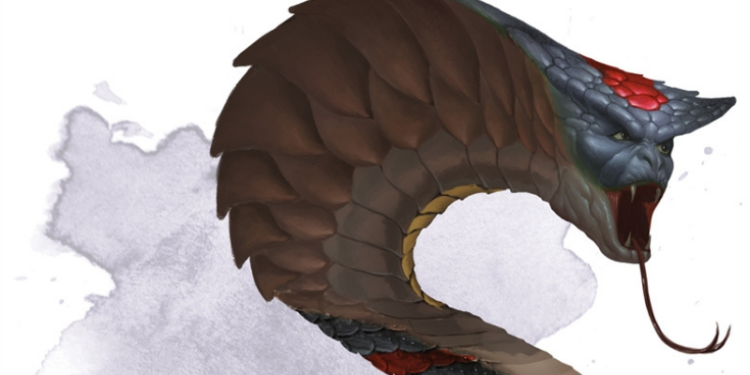 Today we’ll continue the Using Monsters series with a focus on a monster that rarely gets as much attention as their reptilian brethren, the Naga. These monsters have little in lore compared to dragons, giants, or even gnolls.

The Monster Manual tells us that Nagas were created as guardians by some long-forgotten race and now guard their creator’s treasures. This leaves us with a lot of open space to work with and makes it pretty flexible to fit them into any given game world. Let’s explore these snakey bois in today’s article.

Finding the Story of the Naga

First off, you’ll have to do a bit of work creating the circumstances for the Naga to be present in the region your game is set. They conveniently inhabit ruins and guard treasure so it shouldn’t be too difficult. But, unlike dragons, they tend to rule their domain more like a humanoid might – albeit an immortal, magical humanoid.

Whether they keep their nature secret or are openly acknowledged as the rulers of an area, think about what factions would develop to deal with the presence of a naga. Who would want to control access to the powerful ruler? Who would be their enemy? Who would want to see themselves ruling in the Naga’s stead?

The curious thing about Naga to me is that they seem obsessed with knowledge and accumulating magic items. This could be a holdover from their first days as guardians. They are also immortal and if killed, reform after a few days. How would this affect their planning?

They are very much like a scaled lich, perhaps with less overtly evil motivations, but operating on the same timescale. Unlike liches, they have no phylacteries to destroy to prevent them from reforming. The Yuan-ti, their rivals, created a ritual to create bone nagas out of a resurrecting naga.

Perhaps the heroes decide to take down a tyrannical naga and in order to do so must uncover this ritual, slay the naga, raise it as a bone naga and then slay the naga a final time. Or they must find a djinn willing to grant them a wish to keep the naga dead. That sounds like a really fun adventure!

What Does the Naga Know?

The nagas are as ancient as you want them to be and specifically collect knowledge. Guardian nagas prevent magical items from falling into evil’s hands so they could be a great resource for players who are searching for some way to defeat the big bad evil guy of the campaign.

If the naga is hostile to the party, think about

An immortal being might be a bit flippant about letting anyone into their lair, but they are specifically guardians of powerful treasure. They won’t want that in the hands of anyone they deem unworthy, so fill their lair with traps.

A naga’s primary motivation is to protect its treasure and to maintain its authority over those who serve it. These two can be used when creating combat encounters. They don’t have lair actions like a lich, so shape the ruins they live in so that the environment and the monsters both try to fight off the party. They’re powerful spellcasters and have eternity to fortify their lair, so they likely have something like rooms of spike pits or snake pits, glyphs charged with a fireball, illusionary terrain, and a secret pocket dimension where the real treasure is.

A naga’s lair could be like a high-security bank, with checkpoints everywhere and contingents of constructs ready to be deployed. Breaching their lair might require finesse rather than brute force, necessitating the party spends time scouting the location and gathering information about the Naga and its habits. A rival Yuan-ti faction might make a convenient ally only to betray the party at the last second.

Nagas offer a kind of lower-level lich-like experience, and I likely will be using one in one of my games. They’re really cool and I hope this article encourages you to use them in your own campaigns.

Check out past articles here:

D&D Beyond integrates Nerdarchy’s Out of the ...

Monsters of the Wilderness Kickstarter