There’s a new collection of Feywild (not all of them fey) races in the new Unearthed Arcana document, continuing the vein of new player races we last saw in Gothic Lineages. There are four new player races here, and every one of them came as a surprise to me in one way or other. I want to establish up front, though, that me making jokes about the fourth of those races won’t be a rare bit.

The byline for this one is Taymoor Rehman, Ari Levitch, and Jeremy Crawford, with input from the rest of the D&D design team.

Okay, it’s super easy to gloss over the intro text and miss the part where everyone gets +2 to one score, +1 to another, or +1 to three. I say this because I totally glossed over it, like the top-flight genius literate person that I am. Argh. I’m delighted not to have to choose between ability scores and cool features, because worrying about math-fixing is tedious as hell.

As in Gothic Lineages, there’s some sidebar commentary on race design. Here, it’s an explicit statement that it is okay to play and playtest these races, the new racial mechanics of Tasha’s Cauldron of Everything, and races that predate Tasha’s.

It’s possible that I’m forgetting it (not looking it up right now, or honestly even sure where I’d start), but I can’t think of when fairy has been a distinct thing in D&D, as separate from sprites and pixies and every other thing that Gygaxian taxonomy declares as an independent species. The Small size and Fey Characteristics table strongly suggests to me that it’s riffing on Honeythorn Gump and other fairies from Legend.

Highly mobile, a lot of minor miscellaneous effects, and some faerie fire? Yeah, that about tracks. I’d play this in a campaign that was going to lean hard on fey content, but probably not in any other kind of campaign.

Hobgoblins of the Feywild

I don’t recall any previous hint in D&D that goblins come from the Feywild, but, well, not looking it up. The goblins in my campaigns have always been pretty fey-inflected (see also my piece on goblin markets!), so I’m favorably disposed toward fey-affiliated hobgoblins.

I… could actually be clearer about whether this is a new hobgoblin variant or a replacement hobgoblin. The story hints at possibly being a full replacement, and I don’t object to that. In effect you’re trading proficiency in two martial weapons and proficiency in light armor for Fey Gift and Fey Ancestry, and… that’s a real trade up. It means your race is part of the story of your actions in the game more often, and that’s a big plus to me.

Also, the idea of a Seelie/Summer Court hobgoblin is super appealing right now.

It’s not at all surprising that there should be a lot of anthropomorphic races in the Feywild. I haven’t perceived a ton of outcry for owl-people, but Don Bluth dismisses me as but a poor fool. 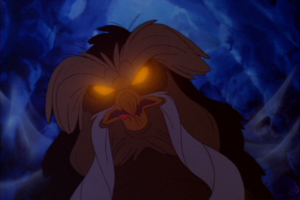 Overall… I don’t know for sure that this is a PC concept I would go for, but I don’t dislike it. As with fairies, in a Feywild-focused campaign, the whole look here moves way up in my priority list. Thinking of all the other animal races I’ve seen over the years, I’m honestly surprised there’s not a feature relating to their beak or talons. Not objecting – just surprised.

The supporting fiction for humanoid rabbits is… let’s say it’s robust. How dare Mel Blanc be dead at a time like this? Richard Adams says, “Make them beasts and not humanoids, you cowards.” In the unlikely event you haven’t read the immortal Watership Down, it has some incredible lessons to teach about how to present action and challenge scenes, and… you know what, I’m in danger of haring off entirely into some kind of digression. (Okay but El-ahrairah is clearly an Archfey, and if someone doesn’t have fan art mashing up the Raven Queen and the Black Rabbit of Inlé, I don’t even know what we’re doing here.)

Right. I should get to the mechanics, huh?

“All the world will be your enemy, Prince with a Thousand Enemies, and whenever they catch you, they will kill you. But first they must catch you, digger, listener, runner, prince with the swift warning. Be cunning and full of tricks and your people shall never be destroyed.”

No real objections. Writing features that would also make you a digger sounds like a pain to balance. Owlfolk PCs, please do not make me tell you again that rabbitfolk PCs are friends, not food.

This is selling a Feywild quite different from what I expected, and y’all know that I have strong feelings about fey content. I don’t object to it, but I do think most D&D settings would have a constant “you’re a what now…?” reaction to three of the four races here. Each conversation starting with a few minutes on how unusual one aspect of one party member is would get old in a big hurry.

It’s fascinating to see the design team explore the mechanics that fit into their new goals and boundaries. If you’re a freelance 5e designer, I can’t emphasize this enough: you need to be thinking about how you’re going to design races going forward. Some publishers, I’m sure, won’t adopt WotC’s new style, but I suspect the broader community will make that position decreasingly tenable.