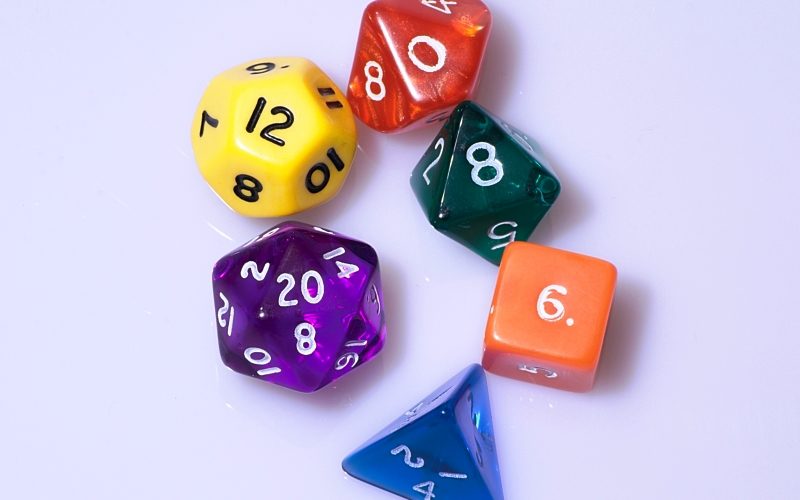 Some people like rolling dice, and some may say that is the best part of the game (I do like rolling dice, but I think the story is the best part of the game). During Combat the Dungeon Master will roll a 20 sided die, and then verifying that roll against the player’s Armor Class. This is to check and see if a monster hits a player’s character. We treat the NPC and Monster in combat exactly like a Player character during combat.  But what if the players were to roll that die to determine if they are able to dodge getting hit?  How exactly would that work when it’s the monster’s turn to attack?

This can be done very similarly to the variant rules for Defense Roll in D&D 3.5 edition, which can be found on page 25 of the D&D 3.5e DMG.  That variant system uses two opposing rolls, but I want to just switch the roll to the character instead of adding more complexity to the Attack system.  I want to create an active combat defense system for the players, and I will first set it up so that the players react against attacks, instead an Attack system where there is a passive combat player defense system with a static Armor Class.

You will need to modify the combat system, so that instead of monster attack rolls, we have player defense rolls. Normally, a d20 is rolled and modifiers are added and compared against an Armor Class(AC).  The AC can be looked at as just a set Challenge Rating(CR) that the monster must match or surpass to hit.  With a straight +0 attack modifier, against an AC of 19, there would be 10% chance that a hit is made, and potential damage can be done.  You can see the probability by what rolls are needed to hit.  So in the above case, the DM would need to roll a 19 or 20 against an AC of 19.  That would make it 2 out of 20 possibilities and that converts to 10%.

So how would you switch that Armor Class Challenge Rating system over to a Defense Saving throw that the Monster’s attack will create?   The only complexity will be in a change in mind set, with switching critical hits and automatic misses when rolling a 1 or a 20.

A creature normally gets a bonus to hit, so it would get an average of the d20, a 10 and and it’s attack modifier would be added. So for for the example above, it would give us 10+0 for a 10 CR.  The player would roll a d20, and if he rolls a 1, then the monster gets past his defenses. A 5% chance, and would in effect be a critical hit against the player.

We need to switch the player’s AC over to a defense bonus to their roll.  Then create a Challenge Rating from the monster stats that the player is attempting to beat with their defense saving throw. And test all of that and make sure it works correctly.  Since there is an underlying critical hit, that would be switch to a 1 on the roll instead of a 20.

Whenever anything attacked your player character you would then have to roll your defense saving throw with that defense bonus from your armor class.

A creature normally gets a bonus to hit, and then a random roll from a d20 to see if it hits the player.

First we take the average of the d20, which is a 10.5, and add the attack modifier.  We get 11 + the attack modifier. This creates the Attack Challenge Rating.  For a creature with a +5 to hit, that would be a Attack Challenge Rating of 16 (11+5).  This is to correct for the fact that ties go to the die roller.  But remember with this Defense system, a Roll of a 1 by the player always Hits and is a critical hit, and a roll of 20 is always a dodge by the player (a critical miss).

I’d like to use the same examples above and so we have a creature with a +5 to hit. Against a player wearing armor with an AC of 17.

Check that versus DM/Monster Rolling the die

The odds remain exactly the same. 45% to hit versus a 55% to dodge. The only thing that changes is that the players are making the rolls.  So that seems to work.

So lets look at a Low level Monster that is trying to hit a player with a high AC. So we have a creature with a +4 to hit. Against a player wearing armor with an AC of 21.

So lets look at a High level Monster that is trying to hit a player with a Low AC. So we have a creature with a +11 to hit. Against a player wearing armor with an AC of 10.

We create a defense bonus which would be a +0 bonus for the player.  The Monster Attack Challenge Rating would be 22 (11+11).  The player then needs to have a modified roll a 22 or above. The monster will hit every time unless the player can roll a 20 to dodge the attack.  So there is a 5% chance of saving (dodging) against the monster’s the attack.  And with a Roll of 1-19 by the player, the monster hits, and a 1 being a critical hit against the player. This is a pretty extreme case, but is important to understand.

This is not something that will appeal to every group or every player, but if you’ve got a table where most of the players attack and then stop paying attention this might be exactly the kind of engagement that keeps them glued to the action.  The Dungeon Master calls out a monster attacking  your character and you will need to roll a d20 as a defense.  Sounds like fun.  You should be able to this on the fly and just switch back and forth, and go back to the standard combat system when the player’s seem more engaged.  What do you think?

Thanks for reading, and have fun!