Designing a Realistic Map For Your Campaign 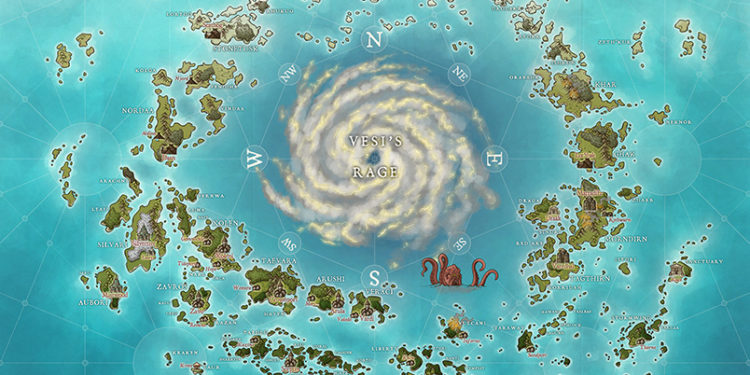 When designing your map there are a few rules of thumb to keep in mind. These mostly have to do with how water moves across the land, and subsequently where life tends to be. Keep in mind that when breaking these rules, just justify it with an in-game reason. After all Dungeons and Dragons is a fantasy world. Want a waterfall that goes up instead of down? Magic!

Start with a real-world map. I like to start with local maps of places I’ve lived. What if, for example, the San Francisco Bay area was in a fantasy world and maybe a bit smaller? This gives you a realistic starting point to develop the world from, complete with interesting locations. Put a wizard college where there’s a real-life college or a fishing town where there are docks.

Feel free to take some liberties with the map, warp landmasses, cut and paste from other places, or just altogether change a familiar landscape to a different one. I’ve made a map based on the central coast of California, replacing a city with a volcanic highland, and putting a river where a freeway runs.

Mountains tend to form from two processes: plates of land smashing into each other, or volcanic activity. The land smashy-type gives you nice long ranges that can often be quite high, like the Rockies, Andes, or the Himalayas.

Consider which side rain tends to come from. The other side is likely to be more arid or desert. Coastal mountains in an otherwise arid region can serve as a way for moisture to condense, creating opportunities for life to grow in the otherwise inhospitable land.

Volcanic ranges often have high peaks and long conical sides and can be either inactive or active volcanoes. They have very fertile soil that encourages lush forests and vegetation. Prime real estate for farms too.

Also, consider magical mountains – like a mountain made out of crystal or entirely out of ice. How did that come about? What caused it and could it happen again?

Rivers flow from high ground to low, seeking the ocean. They can double back, but this is really rare and more likely to happen in flat or swampy areas, where the water can spread out – or if magic is involved.

Rivers are the highways of the premodern world, allowing heavy, bulky goods to be shipped quickly to places where it is needed. A mining town might be located near a river that is large enough to support the barges that ship the ore down to refineries in the city.

Rivers are centers of life too, with many species, aquatic or not, using them as a vital resource. Conflicts between towns over water rights or tolls might sound boring but could lead to an interesting adventure if you add in some intrigue, a few dirty tricks, and maybe an ogre or two.

There is so much more that goes into map making, more than I can cover here. Check out some of the resources below for even more information

Map from the Seas of Vodari campaign setting!

How GMing made me an Extrovert, kind ...