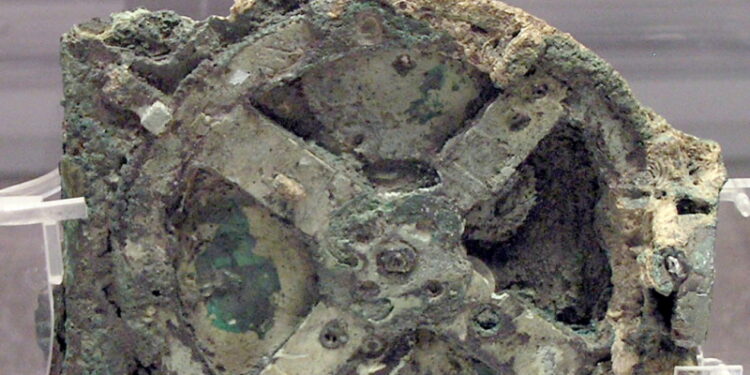 Many settings, from Vodari to Breath of the Wild, include Ancients whose technology are indistinguishable from magic. In some, it’s even the main source of magic items! Anyway, in this article I’m thinking about what some of those cool items might be.

I guess I should clarify that this is proposed canon at this point – Shawn and the other writers are seeing this for the first time here in this article along with you.

The featured image above is licensed under a Creative Commons Attribution Share-alike 3.0 Unported license. It was created by Commons-user Marsyas.

The metal that the Ancients most favored for their devices – to the same degree that modern dwarves and gnomes favor iron and steel – is a pale green metal, as resistant to tarnishing as gold, phenomenally strong, and light enough that it doesn’t drag down swimmers. Most of their devices have a streamlined, almost fluid look, with twisting grooves or channels cut into them. Silvery circuitry seems to rise toward the surface of the metal when the device is in use. The alloying process that creates ancient metal is long lost, but scavenged metal can be used to repair other relics.

This gauntlet can be configured to fit either the left or right hand. While wearing this gauntlet and holding nothing else in that hand, you can close your hand to project a field of blue-green force along the back of your forearm or around your fist. This requires an action or bonus action on your turn, and lasts until you open your hand again as an action or bonus action.

The force can take one of three different forms, which you choose at the time you close your hand:

Warriors among the undersea people prize these gauntlets very highly for their versatility, and for offering shields that don’t have to fight against water resistance while on the move. Enough shielding gauntlets have been discovered that most monarchs have one or two that they award to their most favored guards – or assassins.

One side of a morphic cube opens when touched, allowing you to place single solid object within. As long as the object fits and you can close the door, you can pack the cube in crushed gemstones and press some of the strange markings on the side. The value of gemstones needed is 200 gp for a 1-ft cube, 1800 gp for a 3-ft cube, and 25,000 gp for the 4 ft x 4 ft x 8 ft box. Roll a DC 18 Intelligence (Arcana) check. On a failure, roll once, and the object is transmuted into that material. On a success, you can roll twice on the chart below, and you can choose between those two results.

The morphic cube can transmute an object once, and can’t be used again for one week. Don’t try to leave the box’s door open when you perform the transmutation. You won’t like the results.

The 1-ft and 3-ft cubes are regarded as phenomenally valuable items. The largest box – which can’t be called properly be called a cube – is so expensive to power that only those who are already fantastically wealthy can operate them. Their similarity to oversized coffins is lost on no one.

This small device has odd protruding prongs, like the legs of a spider. When you hold it in your hand, you can see creatures and objects in the Ethereal Plane within 10 feet, and you gain blindsight to a range of 10 feet. It is possible to use as an melee weapon. It is an improvised weapon that deals 1d4 piercing damage and 1d4 force damage on a hit. An ethereal creature or object you hit with this weapon rolls a DC 12 Charisma saving throw. On a failure, it is visible and tangible to other creatures in the Material Plane for 1 minute.

This grooved sphere is eight inches in diameter. As an action while you’re touching it, you can command it to work on a creature within 5 feet of you that is missing any of its hit points, or is diseased, cursed, or poisoned, or dead. You can command the globe to stop its work as an action; it also stops work if its target no longer meets its criteria.

Five needles protrude from the globe (and, if necessary, a scalpel) and perform strange medical practices on the target. The target is immediately stabilized, and the progress of any disease, curse, or poison stops. After 1d10 rounds, the target is healed for 3d8 hit points. After 2d10 rounds, one disease, curse, or poison affecting the target ends. After 4d10 rounds, a dead creature receives a raise dead spell. The device can work for up to 30 rounds, and regains all expended time each day at dawn.

The globe is able to float in place, in air or water, unless moved by a significant force, strong current of air or water, or a creature’s action.

Under the Seas of Vodari (and D&D in general) aren’t saying you can’t use shields underwater, just like we’re not saying you can’t use greatswords underwater if you have a swimming speed. But in the “reality” of the setting, your character would probably prefer a solution that avoided water resistance. Also, the shielding gauntlet is a +1 shield, not a standard shield. Or it’s a non-throwable dagger and 1 point of AC, sort of like the Dual Wielder feat. Or it’s an off-hand rapier. Whichever, really.

The morphic cube touches on the Horadric Cube. Other than that, it’s about giving players way to materials that are otherwise hard to come by undersea.

The ghost star – everyone needs a ghost sensor that they can use to stab ghosts, right? This is a common thing if you’re a wildly advanced magical and technological society?

Finally, the chirurgical globe is just looking around for other functions that adventurers would care about, without going back to things that are weapons, armor, or both. So if it’s a bit too much like the IT-O Interrogator from Star Wars: A New Hope, I wasn’t 100% satisfied with what my brain was offering either. The randomized, time-based limit on its daily function is intended to make it feel a little more like weird tech and a little less like D&D magic.