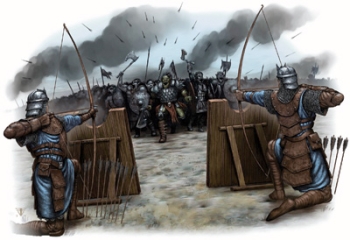 Image Source: Wizards of the Coast

Mike Mearls at Wizards of the Coast revealed details yesterday about the rules for mass combat in Dungeons & Dragons Next.

“Fantasy novels and movies often end with huge fights, as two armies representing the forces of good and evil face off in battle to determine the fate of the world. Though D&D has always been focused on individual characters, the game has taken a number of different approaches to rules for mass combat over the years. (In fact, the Chainmail rules for fighting medieval battles with miniatures were one of the key inspirations for the original D&D game.) When we’ve talked to players about the options they’re looking for in D&D Next, a set of rules for mass combat has been at the top of many gamers’ wish lists. Battlesystem, a set of rules for pitting D&D armies against each other, is our response.”

While the typical D&D adventure still revolves around a small group of plucky adventurers, many fantasy stories end in an epic conflict between two armies. Players have been asking for years for rules to handle this kind of mass combat in D&D. Battlesystem is an extension of the standard combat rules, so players familiar with the core combat system will pick up the optional rules quickly.

Battlesystem differs from standard combat largely in terms of scale. Each round of combat in Battlesystem takes 1 minute, and each grid square represents 20 feet. Miniatures are scaled up, with a single figure representing a “stand” of allies or enemies. Each stand fights as a single group, representing ten Small or Medium creatures, five Large creatures, or two Huge ones. Stands are organized into larger units as skirmishers or regiments. Regiments move in tight formations, while skirmishers are faster and less restricted in their movement. Difficult terrain, walls, and cover all work the same as in the core rules. Combat between stands works the same as the core rules, with each stand making a single die roll against the other.

Solo creatures, such as a player character, important NPC, or powerful enemy, can also be added to the battlefield. Solos can fight on their own on or join up to fight with a stand. If a Solo is caught alone by a stand on the battlefield, the stand makes an attack against the Solo for each creature in the stand. So a stand of ten angry goblins could be a big problem for a lone thief in the middle of the battle. However, if a Solo joins up with another stand, the enemy stand can only make a single attack against it. Solos from each army can also meet on the battlefield and duel each other, playing out ten rounds of combat using regular D&D Next rules for each 1-minute Battlesystem round. The statistics for monsters and characters are mostly unchanged for the scaled up stands.

Morale also plays a key role in Battlesystem. Units must make Wisdom saving throws or flee once the unit has lost half its stands. Solos can attempt to rally fleeing units back into battle. Victory conditions can differ depending on how the DM designs the battlefield. Each army is given a set of objectives, each of which has a value in victory points. The army with the most victory points wins.

Reading about Battlesystem, my first thought was of theD&D 3rd Edition supplement Heroes of Battle, which added rules for dropping your characters into the middle of massive wars. Making Battlesystem an extension of the core D&D Next rules makes it a lot more attractive to use. Given the way Solos work, I can see how you could play out something like the Battle of Helm’s Deep. What do you think? Is Battlesystem something you would use in your campaign?

Source: Wizards of the Coast