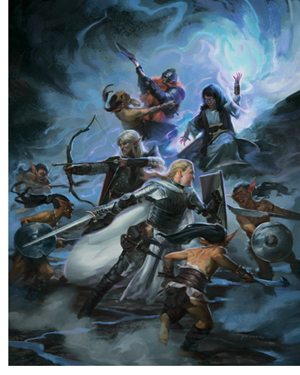 The Basic D&D free PDF has been announced by WotC. It will release in July, at the same time as the Starter Set Box, and it will get updates as other books – including the Player’s Handbook, Monster Manual, Dungeon Master’s Guide, and adventures are released.

“Basic D&D is a PDF that covers the core of the game. It’s the equivalent of the old D&D Rules Cyclopedia, though it doesn’t have quite the same scope (for example, it won’t go into detail on a setting). It runs from levels 1 to 20 and covers the cleric, fighter, rogue, and wizard, presenting what we view as the essential subclass for each. It also provides the dwarf, elf, halfling, and human as race options.”
– Mike Mearls, Senior Manager for the D&D research and design team

This is a great approach to get both new players and veterans to check out the new rules without having to take out a car loan. I’ll still be grabbing the D&D Starter Set on launch day.

I’m wondering if it will be impossible to convert existing 4e character races and classes from PH2 and PH3 to this edition of the rules. It looks like we’ll have to be happy with the 4 classic character classes (Cleric, Fighter, Rogue and Wizard) and 4 races (Human, Halfling, Dwarf and Elf) until the Player’s Handbook comes out on August 19th. At 320 pages, it will be very close to the page count of the first 4th Edition Player’s Handbook which had 8 classes and 8 races.