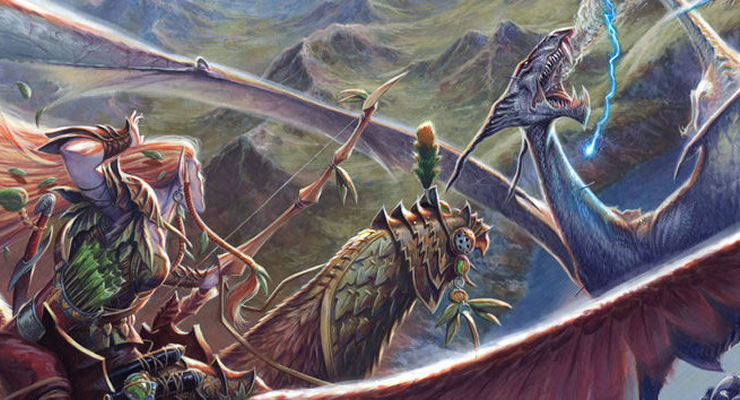 So you’re flying that cool Pegasus that just appeared earlier in the forest and it let you ride it.   Coincidentally, your DM had bought a Icon of the Realms Miniatures Booster Pack, and found a Pegasus inside.  He’s now making noises with it as he swooshes the Pegasus through the air with your miniature riding it.  But then he pulls out a Green Dragon (in the other pack he bought), and now you are face to face with that crazy thing.  But how are you going to fight in the air? Fight, you better start flying away.

Let’s break out the Dungeons & Dragons 5th edition rules and figure out how to run combat why flying a mounted creature.  The rules are simplified and straightforward, but some are missing and it all probably won’t be crystal clear until the dungeon master’s guide is released in December.  But let’s summarize as much as we can ALL right here, and figure this all out in one placed.

Certain special mounts, such as a pegasus or griffon, or special vehicles, such as a carpet of flying, allow you to travel more swiftly. The Dungeon Master’s Guide contains more information on special methods of travel. [I need a D.M.Gee!!!!]

SPECIAL WEAPONS – LANCE
You have disadvantage when you use a lance to attack a target within 5 feet of you. Also, a lance requires two hands to wield when you aren’t mounted. [That’s cool, a lance in an aerial fight, but what if you crash]

SADDLES
A military saddle braces the rider, helping you keep your seat on an active mount in battle. It gives you advantage on any check you make to remain mounted. An exotic saddle is required for riding any aquatic or flying mount.[60 gold for exotic saddle]

A knight charging into battle on a warhorse, a wizard casting spells from the back of a griffon, or a cleric soaring through the sky on a pegasus all enjoy the benefits of speed and mobility that a mount can provide. A willing creature that is at least one size larger than you and that has an appropriate anatomy can serve as a mount, using the following rules. [Why do you tease me D.M.Gee!!!!]

Once during your move, you can mount a creature that is within 5 feet of you or dismount. Doing so costs an amount of movement equal to half your speed. For example, if your speed is 30 feet, you must spend 15 feet of movement to mount a horse. Therefore, you can’t mount it if you don’t have 15 feet of movement left or if your speed is 0. If an effect moves your mount against its will while  you’re on it, you must succeed on a DC 10 Dexterity saving throw or fall off the mount. If you’re knocked prone while mounted, you must make the same saving throw. [So basically if there is a crash, or you’re knocked prone do a Dex save versus DC 10, on a fail start falling…. AAAhhhhh!!!]

While you’re mounted, you have two options. You can either control the mount or allow it to act independently. Intelligent creatures, such as dragons, act independently. You can control a mount only if it has been trained to accept a rider. Domesticated creatures are assumed to have such training.

Independent Mount
An independent mount retains its place in the initiative order. Bearing a rider puts no restrictions on the actions the mount can take, and it moves and acts as it wishes. It might flee from combat, rush to attack and devour a badly injured foe, or otherwise act against your wishes. In either case, if the mount provokes an opportunity attack while you’re on it, the attacker can target you or the mount. [You may get killed because the Hypogriff is hungry and wants to eat a goblin]

Flying creatures enjoy many benefits of mobility, but they must also deal with the danger of falling. If a flying creature is knocked prone, has its speed reduced to 0, or is otherwise deprived of the ability to move, the creature falls, unless it has the ability to hover or it is being held aloft by magic, such as by the fly spell.

A flying creature can try to stay aloft at a specific place and hover in the air, provided that it is able to do so. If it must move to stay aloft, it flies the minimum distance needed to remain in the air.

These creatures are mentioned for mounted flying. And the Wyvren was mentioned in someplace I can’t remember. I think PAX East, but I’m not sure.

Saving Throws Dex +4, Con +6, Wis +4, Cha +5
Skills Deception +5, Perception +7, Stealth +4
Damage Immunities poison
Condition Immunities poisoned
Senses blindsight 30 ft., darkvision 120 ft., passive
Perception 17
Languages Common, Draconic
Challenge 8 (3,900 XP)
Amphibious. The dragon can breathe air and water.
Actions
Multiattack. The dragon makes three attacks: one with its bite and two with its claws.
Bite. Melee Weapon Attack: +7 to hit, reach 10 ft., one target. Hit: 15 (2d10 + 4) piercing damage plus 7 (2d6) poison damage.
Claw. Melee Weapon Attack: +7 to hit, reach 5 ft., one target.
Hit: 11 (2d6 + 4) slashing damage.
Poison Breath (Recharge 5–6). The dragon exhales poisonous gas in a 30-foot cone. Each creature in that area must make a DC 14 Constitution saving throw, taking 42 (12d6) poison damage on a failed save, or half as much damage on a
successful one.
The most cunning and treacherous of true dragons, green dragons use misdirection and trickery to get the upper hand against their enemies. A green dragon is recognized by the crest that begins near its eyes and continues down its spine, reaching full height just behind the skull.