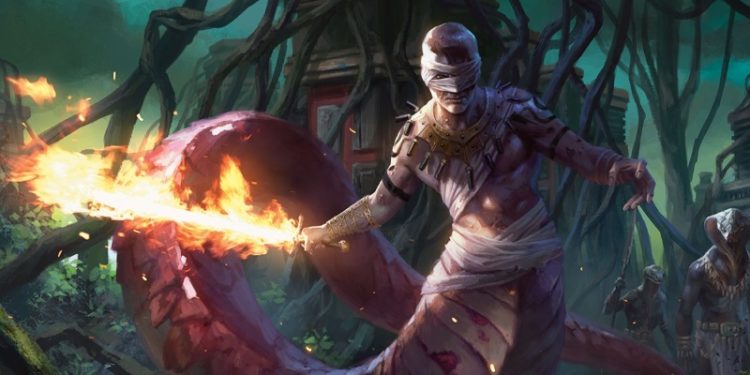 A little while back… okay, maybe I’ve been putting this article off longer than intended… Dan Dillon released Unusual Opposition on the DM’s Guild. Much like Fire, Ash, and Ruin, it’s an adventure for 11th-16th level characters, and as I said before, I’m thrilled to see this tier of play get more support. Dan is someone I consider a good friend, as he’s been the editor for all of my Rite Publishing releases so far. Still, I intend to be as even-handed and fair to him as I would be to anyone. As before, I don’t have any real connection to the Adventurers League, so I’m studying this as if intended for use in a home game.

The Setting and the Hook

Since this is part of the Tomb of Annihilation season of the Adventurers League, it’s set in Chult. More specifically, it takes the PCs from Port Nyanzaru to Refuge Bay to the deep jungles. It moves around a lot, and that passage of time suggests that there will probably be fewer encounters between each long rest than you’d get in a head-down dungeon-basher. That’s to be expected in traditional Tier 3 play, though.

The text offers three hooks: one general, one Harper-focused, and one secretive and Zhentarim-focused. The initial parts of the faction hooks are so similar as to seem trivial, but they differentiate themselves much (no, really, much) more strongly later in the adventure. I really like the just-big-enough differences between a Harper and Zhentarim playthrough of the adventure.

The hooks funnel the PCs toward a Harper named Soggy Wren, who has a handy bulleted list of exposition. Soggy Wren really puts the “agent” in “travel agent,” helping the PCs out with booking passage. There’s a lot to absorb from this NPC, but no more than the adventure’s premise demands. This adventure precedes Fire, Ash, and Ruin, providing players with some of the hints that send them to the Land of Ash and Fire. If you’re in on the Zhentarim action, there’s a secondary encounter with an even more colorful NPC. Port Nyanzaru, Casablanca of the jungle, is nicely sketched between these two NPCs (and now I want to play the owner of a gin joint there).

The rest of Part One is a voyage to Refuge Bay. Roleplay aboard the Nathir could stretch out as long as you like, depending on how chatty your group gets over the course of the 13-day voyage. There are saving throws to represent being an landlubber on a long voyage. There’s also one significant encounter along the way, and here I’ll shamelessly plug Shawn’s new Naval Combat: Running Sea Encounters for Ships & Monsters supplement if you want to go deeper with this. (Um, add more rocs if you do, cannonfire is not a joke.)

Anyway, the PCs can ignore the encounter and stay below decks. That’s the kind of handling a text needs but a GM basically never will. It clarifies the stakes of the encounter, though, and creates a lot of room for negative consequences that aren’t PC death. That’s absolutely vital, as this is your only combat encounter for more than a week before or after.

Part Two opens with what’s probably the centerpiece roleplaying encounter of the whole adventure: persuading a coven of hags to help you. The hags get good roleplaying notes that really give the DM’s voice-acting talents a run for their money. I’m a lifelong fan of the Chronicles of Prydain, and these are a great riff on Orddu, Orwen, and Orgoch, or really any other trio of witches. You could fight them, but there’s really no point – it just makes the rest of your mission harder, or outright impossible. Don’t be that player. (Also, all of the combat notes on the hags highlight how overpowered immunity to the frightened condition can get.)

Success in that encounter – with a side mission for the Zhentarim – leads to a big brawl with undead. Again, we’re looking at one combat encounter in the whole span of this long rest, so there are a bunch of optional tweaks in Tricks of the Trade to make it a little tougher. I like the setup for this fight, since the PCs have control over when to trigger it. If I were running it in my own game, I might go still deeper into unusual mechanics, emphasizing the potential bad outcomes for the person who drank the elixir. This looks like it should be a tough fight, but balancing high-level combat in 5e is just as much of a crapshoot as it was in 3.x, so who knows.

Finally, the infodump that is why you came here. It’s a dream sequence, and if I were running this I’d probably embroider further on the good but fairly brief vision in the text. Maybe inflict some psychic damage, create a bond with the pirate captain whose memories you see, that kind of thing. This isn’t a shortcoming of the module, just me thinking out loud a bit.

The title of this section, “Deathless Vendetta in the Ramshackle Court,” is basically everything I could want. It’s awesome enough that I’m reading to find out if it overpromises. We’re still not done with the travelogue, but Dan’s descriptions stay fresh and creepy. It’s another five days of travel through the jungle, but if they’ve played any of the rest of Tomb of Annihilation, your players probably won’t bat an eye at that.

I can’t complain about the visuals of the Ramshackle Court, either. Ruined ships suspended from the canopy? That is evocative as fuck. The Ramshackle King himself is a threadbare version of Captain James Hook, and I am here for it (Dustin Hoffman or Jason Isaacs, either one). The roleplaying notes prompt the DM to be over-the-top and deliberately artificial, which is appropriate to the character. Unfortunately, I don’t think the adventure gives the PCs a way to find out why it’s appropriate. Maybe it’s intended to be a thing in a later Adventurers League module?

The Ramshackle King sends the PCs on to fight a death knight and some other creatures, so the adventure culminates in a third big battle. Three battles in a four-hour adventure seems fine to me (assuming the accelerated pace of Adventurers League play), but it’s surprising that they’re all separated by at least one long rest.

I’m going to take it as read that Aliera Dunveil’s name is a nod to Aliera e’Kieron, from Steven Brust’s novels. It is, at least, how I’d present her: overwhelmingly proud, overwhelmingly aggressive, overwhelmingly short (for a human, which is to say a Dragaeran). But I digress.

The set dressing around the encounter with Aliera offers a lot of strong foreshadowing for the rest of the plot. The encounter design is also sharp here, with gaze-attack creatures protected by a stone lattice (that still does nothing to block their gaze attack). It’s possible to kill them, but depending on the tools at hand, it might be a lot of extra work. They’re positioned so that their auras and gaze attacks overlap in the center of the room. I further appreciate the Tricks of the Trade section, which offers the DM guidance on the encounter’s tactics.

The adventure wrap-up takes the PCs back through the Ramshackle Court (a cat that good you can’t visit just once), and then all the way back to Port Nyanzaru. ToA’s “Jungle Skyrim” (Chultrim?) style makes me wonder if the PCs would go straight back, rather than wandering off on a whole other story while Soggy Wren waits and wonders if you’re dead in a ditch somewhere. Or you could cast sending, and hope he doesn’t drink up your reward money before you get back to the city to receive it.

The great majority of this adventure works just fine. There aren’t any glaring issues, the encounters logically link together, and the characters follow their motivations. There are no self-solving problems. If this sounds like faint praise, you haven’t read enough adventures, because that is rare. The Zhent, the hags, and the Ramshackle King are great, memorable, grotesque characters. I can easily imagine another 2-3 adventures just based on intersecting with these characters and their goals, and that sounds great.

The grandmother sea hag stat block might come from another text that I’m just forgetting, like VGtM or something, but if not – it’s super cool. Sea hags should stay credible threats, preferably in trios, a lot longer than CR 2, and this stat block is here to help.

(Editor’s note: A “self-solving problem” is one of the problems with a bait-and-switch – players think they’re pursuing one problem, only to have it unexpectedly solved off-camera by another NPC, without any PC intervention.)

If I had to criticize it, I’d say that the adventure could do a little more to get to the fucking monkey. There’s a lot of infodump, all to resolve one encounter with someone who – in the grand scheme of things – doesn’t matter at all. The fundamental goal is to get some information from the Ramshackle King, and the adventure drags you through hoop after hoop to get there. It is a highly exploration-focused setting, of course, so that’s on-message.

There are some editing goofs and lingering Track Changes markup. I’m well familiar with how hard those can be to stamp out, of course!

A lot of the adventure’s appendix text is stats for things you won’t need, unless your PCs sincerely want to fight everything that isn’t nailed down. But the module doesn’t charge by the word, so… do you care?

This is a great adventure, with a lot of room for disorganized-play DMs to add in their own content, especially with encounters during the long stretches of overland travel. Even if run precisely by the text, there’s tons of juicy roleplaying for DMs. There’s no way I could ever run this much content in four hours, but even if it stretched out to twice or thrice that, it’s still strong. It’s a great example of how to shift the balance of an adventure off of the combat pillar and onto the social interaction and exploration pillars. I mean, there’s nothing wrong with the combat here, but combat isn’t what the adventure is about.

Ultimately, it’s an investigative adventure where you need to fight an unrelated opponent to get the last, critical clue. It’s a little strange to look at something like this in isolation. If all of the adventures of this storyline were published together, I think they’d also get written differently, with yuan-ti death squads or something like them as intermittent sources of pressure. That’s more or less what you’d expect in a thriller-genre storyline, which this seems to be.

This adventure is a steal during the DTRPG/DM’s Guild May D&D sale, at $3.19.

D&D Stream of Many Eyes on Twitch ...