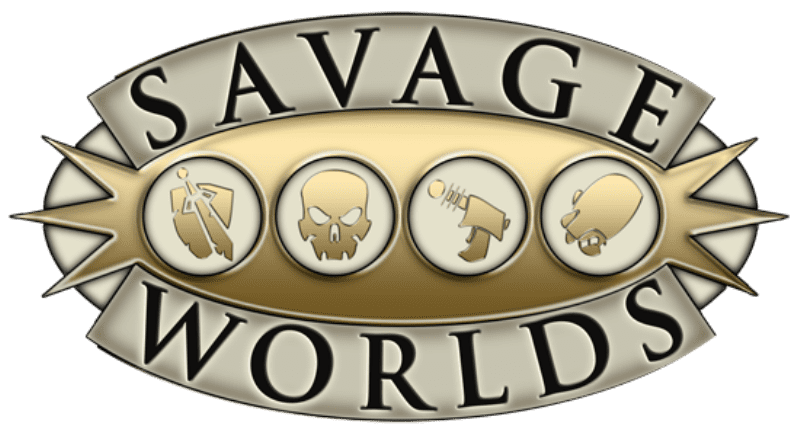 I had put together some rules for running a Wild West setting for D&D 5e one shot and posted it the other day.  I had a lot of comments come back, but one person said I should try out Savage Worlds.  So I went to the Pinnacle Entertainment Group website and looked around and found Savage Worlds.  (Here is the Link to Savage Worlds)

They have a lot of content in Adobe PDF format for download, so decided to check out the free Test Drive rules, and read through them to get a gist of what the game was about.  The Test Drive rules have been designed to run with the free One Sheet adventures & the SW pre-made characters.

Aces. First thing I read about that I like is the Aces feature, when rolling on the die for a trait check or damage and you get the max on that die, roll again, and again, and again:

“Aces – Trait tests and damage rolls in Savage Worlds are “open ended.” That means when you roll the highest number possible on a die (a 6 on a d6, an 8 on a d8, and so on), you get to roll that die again and add it to the total. This is called an “Ace,” and you can keep rolling and adding as long as you Ace!”

I will probably add that as a home rule to my games for damage. 😉  A barbarian rolling a d12 and getting a 12 is awesome, but what if he can roll again, and again, and again.  Might be a little OP, but might be fun to test it out.

Combat. But my first I don’t like, are all the different type of die rolls. Even if you surpass the target number, you may hit but it’s insubstantial. That is unless you are able to roll a lot of ‘raises’, or hit in a specific order.  Seems like a little strange way to create a non-linear system.  But it works.  The other part of Combat is the initiative and using a special deck of cards.  This is my least favorite part of the game. Just roll a die and make it random.

Crunch.  There is some crunch to this system when putting together a character, but nothing mind-numbing. A lot of ranges for weapons with several adders and deducts.  This gives me a D&D 3.5 feeling with so many different Hindrances and Edges.  Power (spell) system is nice and short with power points that get used per spell, with points returning at a rate of 1 per hour. I can start to imagine all the different possibilities of the different die rolls and the added d6 for your heroic die.

What this generic system first reminds me is the G.U.R.P.S game, and HERO System.  GURPS is not a bad system at all, and I used to play it a long time ago, and still have my settings books.  I haven’t done much with Hero, but I did play Champions.  Savage Worlds didn’t start generic, and all the other settings were added as the system grew. Being that it started out as a Wild West game, that is probably its strongest genre. It has gone through some changes through the years, and has new rules that came out a few years ago. So if you want to play a Wild West game, then you couldn’t go wrong playing Savage Worlds.

I would also recommend this system to open up possibilities within your gaming group.  Having a different RPG run at the table is near impossible, because most groups are fixed to one game system.  But Savage Worlds opens that up because it is a quick system to run, and might make your d20 group add some elements that are found in it to your current game.