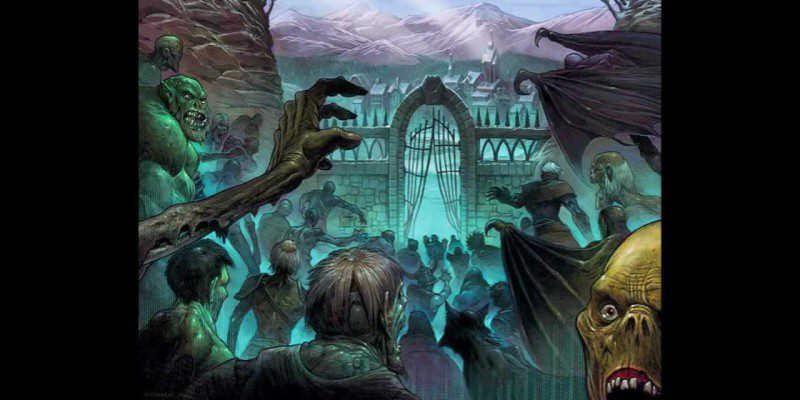 So for Halloween we are hosting a D&D 5th edition game.  We will be playing for a just few hours, so this is just a mini-adventure, but has plenty of potential to continue afterwards. If you are planning on hosting a game for new players, then I would suggest putting together some 1st level characters for  them.  You can use the ones that came with the Starter set, but those have personality traits that have been setup for that particular game. So you will need to make some changes if you use those.

I will be using the Dave Chalker’s 5×5 method from Critical Hits to help and develop my mini-adventure. His links are at the end of the page.

1st step is to create a theme.  Halloween! Done!  Nope, that’s not enough. So I’d like to make it scary, and also this really is initiatory, so it doesn’t have to be overly complicated. How about find and defeat the evil in the Haunted House. What is the Evil, well I will need to figure all of this out as I build this up. I going to try and use the typical Halloween creatures and I can choose from Ghost, Vampire, Zombie, Mummy, Werewolf, Scarecrow, or Witch. Some of these are beyond a Level 1 party to defeat, so I’ll have to work that out.

Use The Five Room Model

So Room 1 will need to be the entrance to the house. They can enter in the windows or front or back door. With multiple entrances, then the “Guardian” that you built up can either just appear in either entrance at will, can easily go to either entrance. I like Zombies and I’ll need to find how many are applicable for level 1 so first I’ll look at the zombies stats:

So using 5 1st level characters, a hard encounter would be 3 zombies.  But I want more zombies.  So I’m going to add a bunch of waves of zombies.  One wave showing up after the other so add 1d4-1 (minimum 1) zombie per 2 rounds.  If the first couple of waves are going too easy, then add a zombie to the random roll (1d4), too difficult then scale it back a bit. Continue throwing zombies, but look a the players.  Are they bored, are they in dispair?  Then have the zombies drop to the ground, and have a ghost appear.

So I want to have a ghost appear and talk to them and then disappear after a few questions, or if the ghost is insulted.  If the players attack, then you probably didn’t throw enough zombies at them, or they are just being hacky/slashy. The ghost disappears and says that they will all die soon.  The ghost will talk about the dangers of the house and the great evil that resides, but the house contains a great treasure.  And give a hint about Part 2, that there is candle in this room will be useful. the ghost disappears after pointing to the door under the stairs.  There is box with three black candles that can be found above the fireplace.

This will be the next floor that the players enter after going down the stairs, and go through a hallway.  The room they enter will be pitch black even for those with dark vision.  They can not see anything unless they light the candle.  Once the candle is lit and they go to about the middle of the room, the door slams shut, and is magically sealed.  This will be a fairly large room with 2 doors, the one that was entered and another on the other side of the room. So it will be totally motionless and the scarecrow is leaning up against the wall. The room has broken furniture, and torn wallpaper on the walls.  But you can see words written on the wall:

3rd wall: “you eat this you will die.”  Someone will notice that there is something scratched into door of the fourth wall with the second door, like claw marks:

4th wall/door: “WHAT YOU WILL BECOME!”

You will delay reading the fourth part, and once you read the last part a wind will blow out the candle and they will hear shuffling of the feet. Once the candle is relit, the scarecrow will be behind someone or appear directly in front of one of the players.  It will only say, “what are you…” in a strange whisper.

If is easily agitated by wrong answers, and will also attack them if touched. If killed, another scarecrow will appear against the wall motionless. And the candle will blow out as the players notice it. Reanimating if the candle is lit.

If they tell any of the scarecrows the answer, then then they will hear ghostly laughter from upstairs, and the scarecrow will go back to it’s spot and become motionless.  The room’s second door will open along with the door entrance.

The passage way from the T intersection leading to this room will  be sort of long, and at the end there will be a locked door. DC 15 lock pick or DC 20 strength to breakdown the door. The door swings into the room.  This is a small room and has three sarcophagi upright and lining the far wall of the room opposite of the door.  Only one contains a mummy. So have it be the last one that is opened.  The mummy will have long teeth and clawed hands, some fur will be visible poking through the mummy wrap.

Inside the last sarcophagi is also a small metal box. It contains nothing inside but a note with a crescent moon drawn on one side.

Hopefully the players aren’t dead and will probably want to rest.  the passage way to this part has a pit trap.  DC 15 passive perception to notice, dc 15 athletics/acrobatics to avoid falling down. It is a 10 ft drop.

I was thinking vampire, but too high of a CR, so I’ll stick with a Werewolf.  Half of this room has two barred cells with one of the doors being open.  (think old west prison) There is a man there in the middle of the room sitting at a table, but as soon as the players enter, he begins to change into a Werewolf.  And flips the table, and attacks.  The cell that has a locked door contains a woman that is already in werewolf form and will attack any player that gets near her cell. If the players have been having and easy time up to this point have another werewolf sitting at the table.

So before defeating the werewolf/werewolves, a shiny bolt will come flying behind the players, and kill the Werewolf they are fighting, and a second bolt will kill the other werewolf in the cell.  Do this sooner if they are having trouble., but there will be at least the last one in the cell for death by a bolt.

The bolt(s) are silvered and come from the hands of two Vampire Spawn wielding crossbows. Once noticed, they will smile and thank the players for opening up the werewolf’s den for their master. Then leave fairly quickly.  If the players attempt to engage they will not try to kill them, but one will fight them and block them as the other flees.  The one that stays will say that their master said that they could live for helping, but in the future, they are allowed to kill the players next time they see them if the vampires are hungry.

I hope you will send me some comments, and this is my first draft so I plan to tweak some things and tighten up the adventure.  I like how the dark room turned out, but don’t really like the mummy room.  I’m thinking a mummified werewolf… anyway please let me know what you think.  i’ll be making edits up till the night i run this.