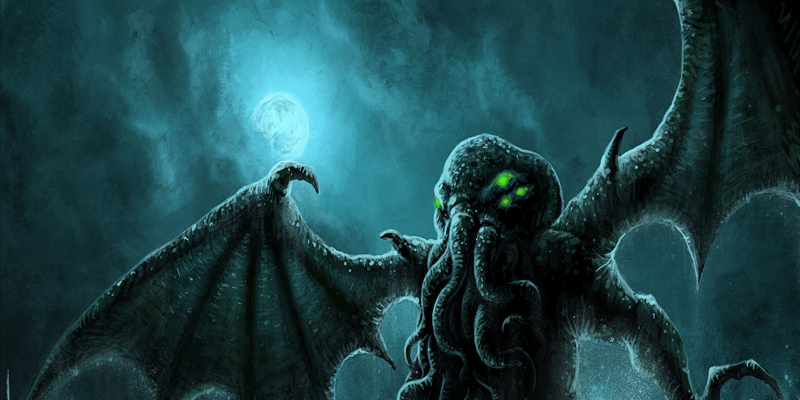 I’m not a smart man, Jenny, but I do know what “Ph’nglui mglw’nafh Cthulhu R’lyeh wgah’nagl fhtagn” means. It means it’s time for me to write something that doesn’t require loads of research because I am still full of opiates. Opiates, for when you will still be in pain, but you don’t care because you are riding a cloud that is shaped like a dog-headed crow, and now you are pretty sure that you are fighting ninjas. I should have pursued that advertising career, after all. Isn’t that right, opiates? Anyway, things are still tough for me, but enough of that. Let’s talk Lovecraft.

I’m a big Lovecraft booster. While I am not a super fan (I would lose trivia contests), I have more than a passing familiarity with the man, his works, and the stories told by subsequent authors who are contributors to the Cthulhu Mythos. Having been obsessed with the Hero’s Quest Quest for Glory games as a kid, I am also not a stickler for Lovecraftian influences remaining solely in literature, as the fourth installment remains one of the best games I have played to this very day. This is a good thing, as Lovecraft is definitively part of the modern zeitgeist. When most people think Lovecraft, they think Cthulhu and tentacled horrors. This is absolutely correct, but it’s also lacking the contextual awareness of his works. This lack of familiarity has resulted in just tentacled horrors showing up all over the place in pop culture and people labeling the work as Lovecraftian. Instead of raging against the fury of this particular storm, let me instead suggest five things you can take from Lovecraft for tabletop game use that are not tentacled horrors, nor the Old Ones or Elder Gods themselves. 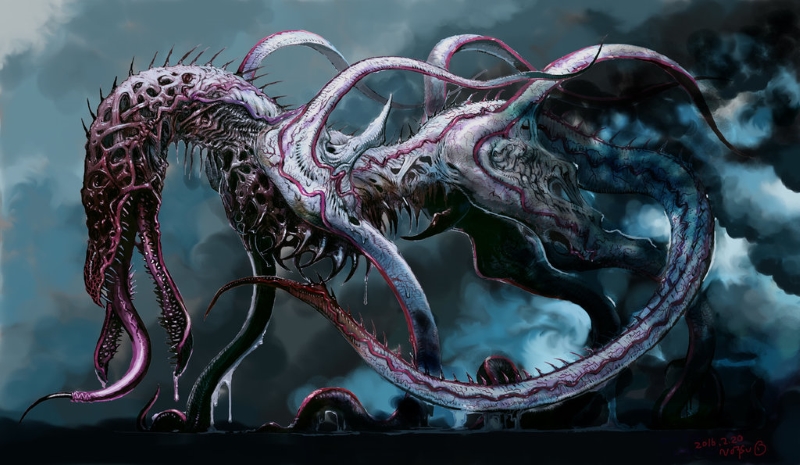 Hounds of Tindalos. My man! Originally created by Frank Belknap Long in 1929, Lovecraft mentions them in his 1931 piece “The Whisperer in Darkness,” codifying them into the Cthulhu Mythos.  The Hounds of Tindalos are prehistoric creatures that roamed the earth before other life had evolved, and live within the angles of time. By contrast, humans live within the curve of time. Hounds stalk their prey incessantly, traveling through time and manifesting in places with sharp corners, as benefitting their relationship to the angles of time. Hounds are thought to be immortal, and are often drawn to time-travelers, though they hunger after all humankind, when their attention is brought to it. Hounds first manifest in corners as smoke, before showing their hideous true form as…well, it’s not really clear, but not dog-like, really, despite the name. They are most likely more bat-like, lean, have long hollow tongues to drain bodily fluids, and the excrete blue ichor. If these horrific creatures can’t inspire you, then I don’t know what can. 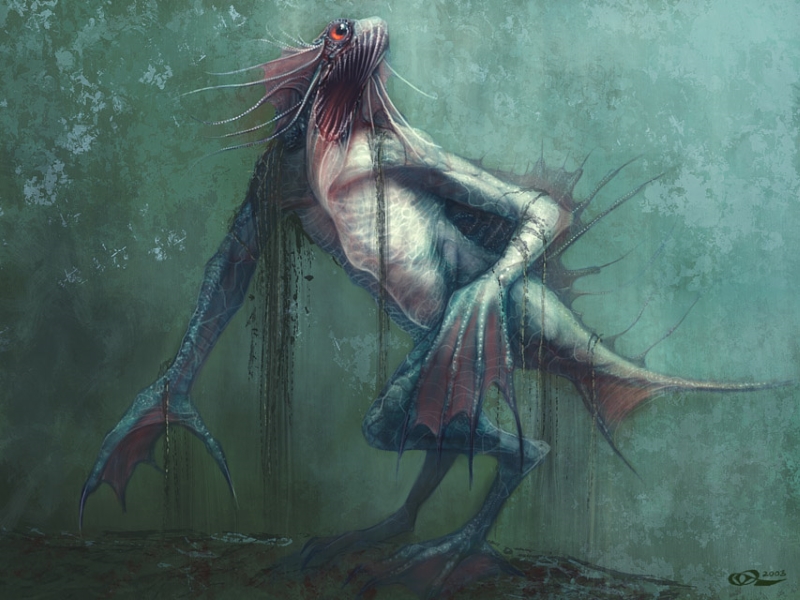 Oh, how I love the Deep Ones. The Deep Ones are a hyper-intelligent race of fish/frog amphibian people that often mate with humans.. This creates hybrid humans, all of whom look just a bit odd and possess bizarre movements, something spoken of in great detail in 1931’s The Shadow over Innsmouth. These hybrids often have narrow heads, flat noses, and bulging eyes, described as “that Innsmouth look.” These hybrids become more and more like the Deep Ones, before eventually becoming one and leaving to live an immortal life, where they continue to grow, beneath the waves in the ancient cities of the Deep Ones. Deep Ones cannot die of old age, though they can die from violence or mishap. The Deep Ones are followers of Father Dagon, who may be either a powerful Deep One or just a rationalized, incorrect name for Cthulhu (Dagon is a fish-deity in our real world history, and much of Lovecraft’s work has to do with the need to rationalize and contextualize),  Mother Hydra, another gargantuan Deep One (probably), and Cthulhu (if, indeed, Dagon is not Cthulhu). The Deep Ones oppose the Chthonic creatures and Old Ones, the lurkers beyond time, and the Elder Gods. I’m totally onboard with Deep Ones. I love those fishy bastards. 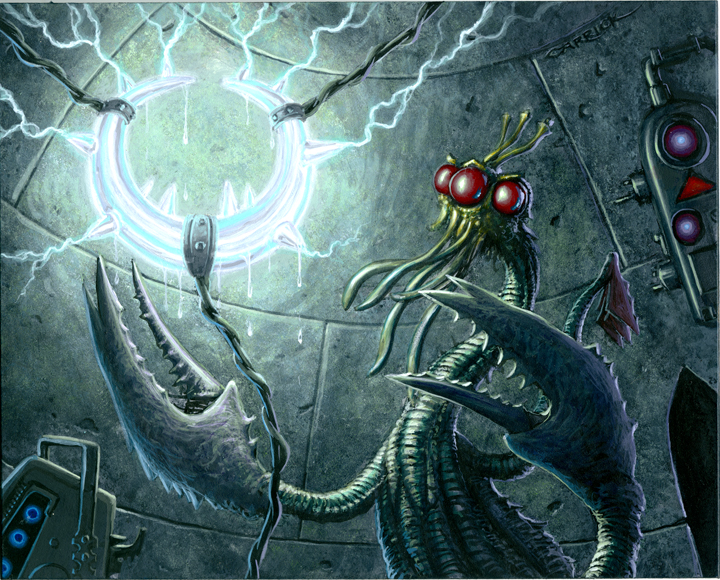 3. The Great Race of Yith

Not everything is a horrific nightmare, when it comes to Lovecraft. The Great Race of Yith were introduced in 1936’s The Shadow Out of Time. Yithians were powerful psychic aliens that lives billions of years ago. They were able to project their being across space and time, resulting in something not unlike possession. In order to escape a catastrophe on their own world, something they foresaw thanks to time-travel induced precognition. They projected their consciousnesses into conical plant-like, four vine-limbed, clawed creatures that lived on Earth. Of course, the Yith then knew humans would rule the Earth, so they began trying to learn everything about us they could. When they swapped bodies with us, the humans in the yith bodies were questioned incessantly, but were treated well, and allowed to wander around the great library cities of the Yith, learning whatever they wanted. Now, some things were erased from the minds of people swapped with the Yith, but this was mainly just knowledge of the Yith themselves.Things get really weird when the flying polyps show up in ancient earth and wage a war with the Yithians. The Yith then look ahead to Earth’s future, finding a race of sentient beetle-folk. The Yith promptly swap places with them, the beetle-folk are destroyed by the flying polyps instead, and the Yith then live in the far future, when the flying polyps are no more. Once again, this should supply you with ample game-running inspiration. 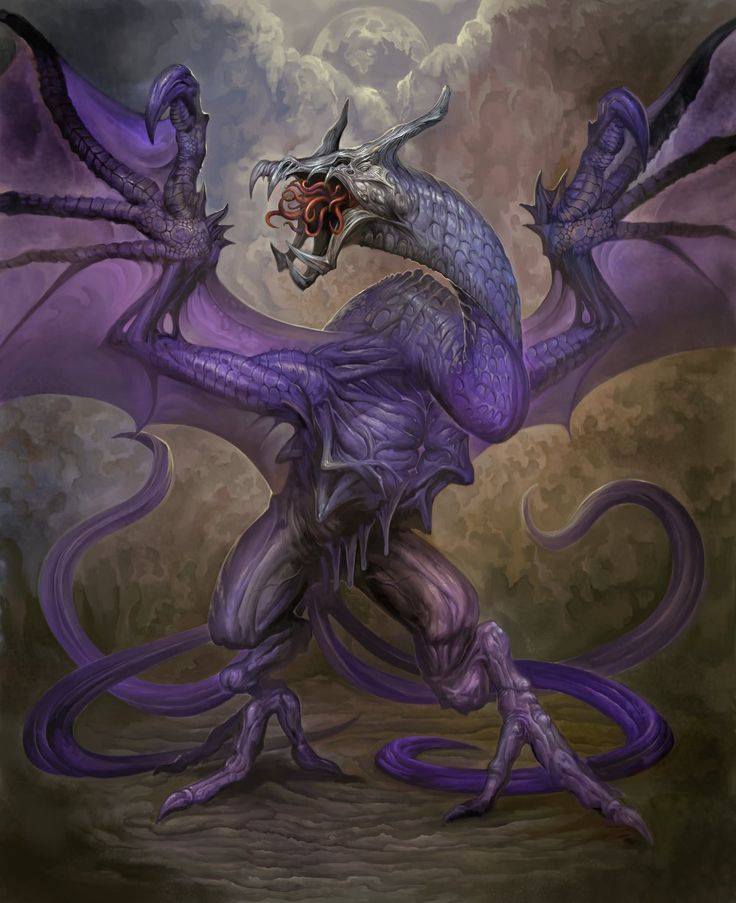 Servants of Nylarlahotep, the Stalker Among the Stars, the shantak are primarily seen in the Dreamlands, though they can travel from dimension to dimension, and from world to world, under their own power. Shantaks are creatures that are larger than elephants, possess heads not unlike a horse, though they are bird-like, are squamous, have huge, heavy slime-coated wings, and have razor sharp talons similar to a velociraptor. Talk about nightmare-inducing. Shantaks war with Nodens and the nightgaunts, as they provide great hunting sport for the Elder God and his minions. This implies the creatures are superb predators, and are a massive-threat to any who encounter them. Of course, they are giant flying nightmare monsters, so that should go without saying. The inspiration here isn’t just in its monstrous form, to me, but rather their nature as sentient servants of a dark god, able to travel through harsh environs and ensure success. As far as servants go, these are pretty rad.

That’s right, fire vampires! Fire vampires are servants of the Great Old One Cthugha, appearing as creatures comprised of crimson lightning. The fire vampires surround their lord, igniting everything they come into contact with. The fire vampires are led by Fthaggua, the high priest of Cthugha, who takes the shape of a swirling orb of blue flame. Fire vampires, and Fthaggua for that matter, drain the energy of intelligent beings, gaining their knowledge and strength should the creature perish during the process. They use this knowledge and strength solely to find better ways to continue devouring things. These dudes make their home in a massive superstructure on a comet called Ktynga. Unlike most comets, this one is able to be steered by the fire vampires, allowing them to cruise around the cosmos, looking for things to eat. They are the foodies of the mythos, when it comes right down to it. Check them out on instagram. Anyway, this is the kind of bizarre, alien threat that can serve as a nice counterpoint to standard threats the PCs encounter. Sentient crimson lightning desiring to feast on your essence and knowledge isn’t exactly common place.

This is really just the tip of the iceberg. The Cthulhu Mythos is vast, and I have not consumed even a meaningful percentage of all that is available. There are a lot of fascinating ideas out there that are ripe for use within games that are not the commonplace ideas and concepts that are most often bandied about. It’s not like I am proclaiming these to be super-secret things only I know about either. I am not being a hipster about it. I just want to share some things I like that might help inspire you in new ways. When in doubt, go deeply weird. That’s my motto.