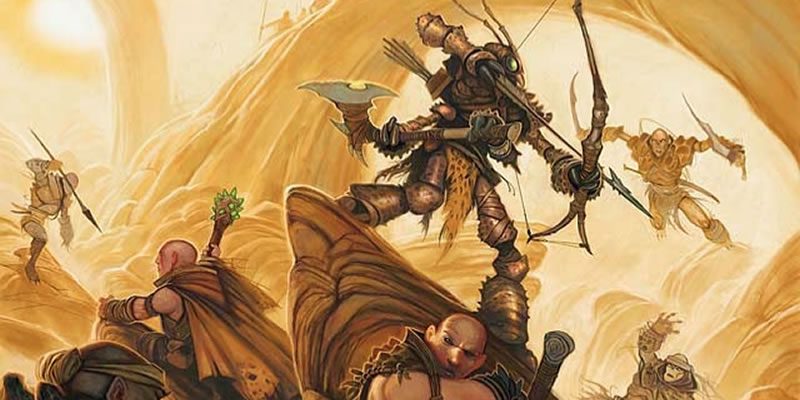 Along with the aarakocra, the thri-kreen are one of my favorite non-standard races to play. Unique and alien, thri-kreen provide for unusual roleplaying opportunities and unusual flavor at the table. The challenge? Thri-kreen are a powerful PC race (see Behind the Development below). Converting them to a standard PC race while maintaining their flavor and popular, race-specific powers was a challenge and even with this conversion DMs should consider before allowing them in their campaigns. If used, DMs and players should play up the thri-kreen’s social disadvantages as much as possible, including limited communication and insight into humanoid motivations and feelings. Though I follow Monte Cook’s design rule that “fluff does not balance crunch”, if you have decided that thri-kreen are usable in your campaign, you can use these disadvantages to build interesting stories and social interactions while balancing some of their physical benefits. Remember that 5th edition emphasizes combat, exploration, and social interactions in equal balance.

Thri-kreen are nomadic, insectoid humanoids typically found in deserts and savannah. They communicate with a species-specific combination of clicks, body movements, and antennae waves, though it is suspected that pheromonal communication allows for more subtlety than most humanoids can decipher. Though non-thri-kreen can learn to understand the basics of thri-kreen communication, it’s impossible to speak. Most thri-kreen understand Common with the same level of understanding. Unless a thri-kreen has spent significant time with non-insectoid humanoids, they make all Insight and Persuasion checks at disadvantage. The same is true of mammalian humanoids when dealing with thri-kreen.

Alignment. Thri-kreen have an alien sense of morality compared to most humanoid races. They follow their tribes and leaders with organized devotion, but when dealing with other humanoid races their motivations are less clear. They tend toward chaotic neutral alignments, though the rare adventuring thri-kreen may vary greatly.

Size. Thri-kreen are slightly taller than normal humans, though they are lighter than they look. Your size is Medium.

Speed. Your base walking speed is 40 feet.

Darkvision. You have darkvision to a range of 60 feet.

Bite. You may use an action to make an attack with your bite. This attack deals 1d6 piercing damage plus your Strength modifier and you have proficiency with the attack.

Poison. Creatures that take damage from your bite attack must make a Constitution save (DC = 8 + proficiency modifier + your Constitution bonus) or become poisoned for 1 minute. The poisoned target can repeat the saving throw on each of its turns, ending the effect on itself on a success. Creatures who succeed on any saving throw against your poison may not be affected by your poison attack again for 24 hours. You may use this ability a number of times per day equal to your proficiency modifier. At 11th level, if the saving throw fails by 5 or more, the target is also paralyzed while poisoned in this way.

Natural Armor. If you are wearing light or no armor, your base AC equals 13 + your Dexterity modifier. You can use a shield and still gain this benefit. Thri-kreen that choose to wear armor must have it specifically designed, doubling its base cost. Magical armor designed for humanoids does not typically adapt to a thri-kreen’s multi-limbed body structure.

Sleepless. Thri-kreen do not sleep and can take a long rest while remaining alert and performing light tasks.

Chameleon Carapace. At 6th level, you can change the color of your carapace to match the color and texture of your surroundings. As a result, you have advantage on Dexterity (Stealth) checks made to hide. You lose advantage if you move more than half your speed in a round.

Extra Limbs. You may have a total of 4 hands worth of items readied at any one time.

Aquaphobe. You can double your Constitution modifier when determining the number of days you can go without water, as well as when making Constitution saving throws against the environmental effects of extreme heat. Like many land-based insects, thri-kreen are not built for life in the water. You make all checks involving swimming at disadvantage.

Weapon Proficiency. Thri-kreen employ two unusual weapons, the polearm-like gythka, and the throwing blade, chatkcha. These weapons are usable by any thri-kreen trained in martial weapons. See the Monster Manual for more details.

Languages. You speak Thri-kreen, and can understand and read, but not speak, one other language (typically Common). The thri-kreen language is not known to have a written equivalent.

Thri-kreen are a powerful PC race, ideal for their indigenous setting of Athas (Dark Sun). As a PC race in a core D&D setting, it was important to reign in some of their abilities and scale others. ADDENDUM: For a follow up conversation about converting high CR creatures from the MM to PC races, including a simpler, more generally applicable version of the thri-kreen, link on over to here.

Speed and jumping: Thri-kreen are the most mobile PC race in D&D. With a base speed of 40 and a 30 foot long jump, these things can get past many defenses at very early levels. Their speed and mobility are such a cornerstone to their build, though, that I decided to leave these abilities as they are.

Bite, claws, and poison: Ah, the thri-kreen poison. ::shakes head:: Developer’s nightmare. I chose to keep the bite and not scale it as I did with the lizardfolk and minotaur natural attacks, hoping that will balance their poison somewhat. The poison doesn’t add damage, which is helpful from a design standpoint, but the new 5th edition condition poisoned isn’t anything to slouch at, granting disadvantage on attacks and ability checks for 1 minute (though, luckily, saves can be made every round to shake it off). Combine that with its ability to paralyze if someone really flubs their roll and you have a very powerful ability. My decisions?

2) Add the rider that anyone who saves against the poison is safe for 24 hours, preventing poison-locking opponents; another gimme.

3) Limit the uses to proficiency modifier; even having the poison affect a target only once per day, unlimited uses of this power will drive DMs (and other players) nuts.

The thri-kreen you fight from the Monster Manual will only be present for one encounter in a day; meaning that limiting their poison’s use to 2-6 times per day could fall within what you would run into in the wild. Folding that into a PC build seems reasonable.

Why scale the DC of the poison if I’m worried about it being to powerful? If you’re already going to allow it, it makes more sense to have it work a decent amount of the time and limit the uses per day instead of keeping the DC at 11. No one wants a racial power that doesn’t work most of the time. What fun is that?

As far as the claws are concerned, I’m not much of a stickler on unarmed damage. Most players rarely use it and increasing it from 1 point to 1d4 doesn’t do much more than add flavor, particularly since unarmed attacks aren’t considered light weapons and can’t be used for two-weapon combat. So flavor wins out on this one. As a side-note, playing a thri-kreen monk will still only net you a 1d4 unarmed strike at 1st level, though you’ll have the option for bludgeoning vs slashing. I suppose I should note that the 2d4+mod damage from the MM is meant to cut down rolls by assuming both claws hit (ie: each claw deals 1d4).

Keen senses: Though it seems reasonable that the thri-kreen would have keen senses (Perception proficiency) in addition to their darkvision, I decided to take it out as a core racial feature and leave it to their background and class. These things are buff enough. Most thri-kreen will be taking classes like barbarian, fighter, ranger, or rogue, so will have it on their class lists anyway. You can also take the new Desert Runner background presented below.

Chameleon carapace: I considered removing this all together but, like their mobility, it’s a key reason people like playing thri-kreen on the table. I limited it somewhat by leveling the power to 6th. My argument being that the MM thri-kreen is a CR 1, meaning it can go gythka-to-sword against 4-5 level 1 PCs and hold its own (but yes, still die). That’s clearly stronger than a single level 1 PC (CR 1/4 or so), therefor some of its stronger powers may come into play later in its adventuring career.

Sleepless: Better than elves, but functionally the same. Again, a thri-kreen’s most entertaining trait is its alienness, and nothing says alien like waking up to see your thri-kreen ranger staring at you throughout the night. Since it’s functionally the same as the elves’ Trance feature, flavor won out on this one as well.

Languages: Alienness. They can’t speak Common, or any other humanoid language. Meaning you’ll need another PC who can understand, but not speak, Thri-kreen. Slight limitation, I admit, but great roleplaying fun.

Aquaphobe: For this one I’m taking artistic liberty. Thri-kreen are desert dwellers. Seeing that they were originally developed for the post-apocalyptic desert planet of Athas, giving them some resistance to dehydration balanced by the minor, but potentially challenging disadvantage on swimming checks made sense.

Common backgrounds for thri-kreen include, folk hero, hermit, and outlander. Criminal, entertainer, guild artisan, and urchin may applicable if thri-kreen are citizens in a major city. Alternately, you can ask your DM to use the Desert Runner background presented below designed specifically for the thri-kreen and wild desert elves of Athas.

Thri-kreen adventurers are drawn to the barbarian, fighter, ranger, and rogue classes, though monks are also quite common. Spellcasters are rare, particularly the arcane kind, though thri-kreen druids with the Circle of Land (desert) sometimes act as spiritual leaders to their tribes. As the world of Athas has no divine gods, clerics would be unusual, but if you’re allowing thri-kreen into your standard D&D world, other classes, including arcane spellcasters, would be as common as you wish.

You are more than simply experienced in desert living, you thrive there. Your tribe has lived in the desert for centuries and you know more about living there than in civilized areas.

Language: One of your choice

You know the local deserts, their cultures, and customs. You know where and when nomadic tribes typically pass through certain areas, which tribes claim which oasis at what time of year, and where food and water can likely be found (though no guarantee). You also have one trade contact with an group or individual outside of your tribe. This contact may be friendly, or barely tolerated, but trade between rival camps is a necessity for survival in the harsh environments. You know when and where this contact will be at any time of year, and can send messages to this contact even over great distances; you know the local messengers, caravan masters, and runners who can carry messages for you.

Use the Outlander lists, or tweak to personalize to your campaign.

A Word About Psionic Variants

Unless your DM is running a game on Athas, where every character has psionic abilities from the start, and begins the game at level 3 (because adventurers less than that die too quickly), then the alternate psionics rules in the MM should not be used.

If they are used in an Athas or psionic-supportive setting, these powers should scale appropriately, and gently:

7th: invisibility (self only) 1/day