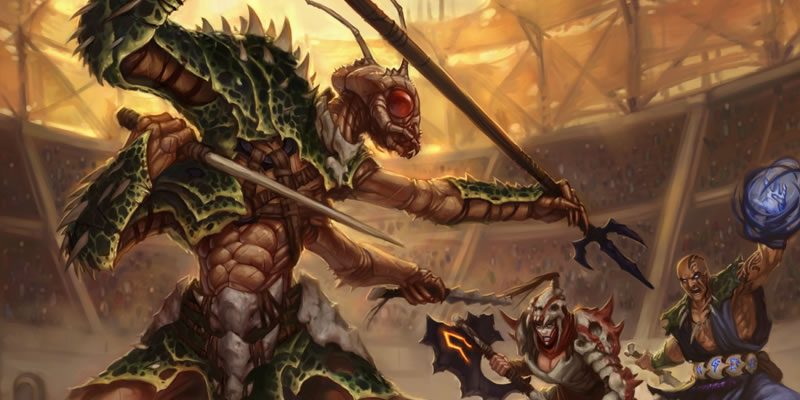 I’ve done a few conversions now of Monster Manual creatures into PC races, both here and at www.gameschangelives.com and the vast majority of feedback has been great. There have been a few conversations about various abilities or choices I’ve made that have been very insightful, so I wanted to take a moment to talk about the challenges and viewpoints of designing high CR creatures for PC races.

There is one major challenge with designing MM monsters as races; often the reason they aren’t core races. They are far more powerful than normal PC races.

Keeping that in mind, you can approach developing them from two viewpoints:

1) Look at the monster, convert its listed powers into PC-style format, and try to smooth out the power.
This has the advantage of keeping the flavor of the race that is usually the draw players have to playing them, with the obvious disadvantage of sometimes being slightly stronger in some areas than other races. For example, with the aarakocra, no other PC race can fly at will. It’s a powerful ability. Removing it would remove the reason people play them. Turning it into a once per day fly spell also makes no sense. So, by scaling the flight and limiting its use to open air instead of dungeons and buildings, it leaves the flavor of the monstrous race, while making them manageable. The other disadvantage (or advantage, I suppose) is that it leaves the choice of whether or not to allow the race up to the DM; which I assume is happening anyway with monstrous races.

2) Look at a core race and plug-n-play abilities while hand-waving off some of the MM powers.
This is a solid, game-balanced way to go and the one referred to in the DMG. It works great for CR 1/4 or less creatures like goblins and kobolds, and is a little tougher, but possible, with CR 1/2 creatures like hobgoblins and gnolls. This is the technique I used for my human subraces builds. When you hit CR 1 and higher creatures, the reason players want to play them must typically be removed.

I tend to go with the first. I can create a thri-kreen that is perfectly in scale with the other races, but odds are they aren’t going to feel like thri-kreen. I’ve considered folding more powerful abilities like their jumping or poison into new feats, but the feat system is elegantly designed to be applicable to almost all race/class combinations.

Let’s have an experiment then. The thri-kreen as a race on par with say, an elf. I’ll include the flavor text of age, alignment, etc, from my CR1-related build for completeness.

Alignment. Thri-kreen have an alien sense of morality compared to most humanoid races. They follow their tribes and leaders with organized devotion, but when dealing with other humanoid races their motivations are less clear. They tend toward chaotic neutral alignments, though the rare adventuring thri-kreen may vary greatly.

Size. Thri-kreen are slightly taller than normal humans, though they are lighter than they look. Your size is Medium.

Speed. Your base walking speed is 35 feet. [Reduced from 40, parallels the wood elf.]

Darkvision. You have darkvision to a range of 60 feet. [As an elf.]

Standing Leap. Your long jump is up to 30 feet and high jump is up to 15 feet, with or without a running start. [Their unique ability. Takes the place of sub-race abilities as well as fey ancestry.]

Keen Senses. You have proficiency in the Perception skill. [Added back in to parallel elf, though not very interesting or unique.]

Sleepless. Thri-kreen do not sleep and can take a long rest while remaining alert and performing light tasks. [Similar enough to trance that it can go unaltered].

Languages. You speak Thri-kreen, and can understand and read, but not speak, one other language (typically Common). The thri-kreen language is not known to have a written equivalent.

By all means, this version of the thri-kreen will work (and please feel free to use it) and can be usable in any standard campaign. Lacking the bite attack, poison, chameleon carapace, and other natural abilities of the MM thri-kreen, they are basically a wood elf who can jump. I might put in some kind of flavor text that these are more ‘civilized’ versions of the race, or some other excuse for the lack of abilities. It has enough of the flavor to pass, though it isn’t the thri-kreen from the MM. Adding back something simple, like the 1d4 unarmed strike or the natural armor, allows the race something unique to do in unusual situations (dropped unarmed into a gladiator pit) while not unbalancing it against other races during the majority of your campaign (does it matter that the thri-kreen wizard doesn’t have to use a spell slot to cast mage armor each day, or the ranger saves 50gp on a chain shirt? It may for your game, or it may not; take it into consideration.)

So when developing MM races, keep in mind the two different ways of looking at the development and what you want to use in your games. Either way can work depending on the feel you’re looking for and your players’ desires.