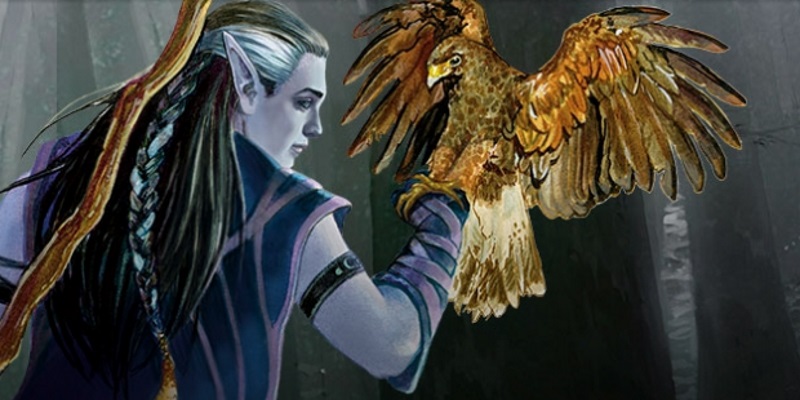 I guess if you’re going to call any class even obliquely harvest-holiday-themed, druid is a good one. Accordingly, this week’s Unearthed Arcana offers three new druid circles and a variant Wild Shape rule. Whatever else might be said, they took more risks with new mechanics this time than last week, and so even if I wind up disliking it (spoiler: I won’t), it’s useful as suggestions for what’s “in-bounds” for third-party design. Third-party designers get read the Riot Act for venturing too far outside the borders that Smith & Wesson Mearls & Crawford lay out in official releases, you know? Anyway, let’s get to it.

Oh, and in case you’re new around here, I have done some writing about druids before. The link points to the last article in the series, with directory links to the earlier ones.

When it comes to a fey-themed subclass for any class, it’s not a question of if but when and what form it takes. Curiously, then, the druid with fey ties is a superior healer, in addition to improving movement. All the more oddly, they are tied to both Courts. My esteemed colleague Colin informs me that this has a lot in common with Emerald Dream lore from World of Warcraft. In specific:

I like that there’s a competitive healer subclass, I like that they do more than just heal (even if it’s a different support function, that’s still interesting), and I like the fundamental principle going on in Purifying Light – an extra cookie for spending a spell slot on healing. Those are all great. I have questions about the overall balance, which is to be expected in the public playtest release, and overall Hidden Paths is just more teleporting than I want to see happening in a game. Cool stuff here overall.

Circle of the Shepherd

Drawing a meaningful thematic distinction between this subclass and the bog-standard druid is really hard, and the paragraph of flavor text here doesn’t quite get there. All druids protect nature, including animals. These druids… protect animals as the core of their practice. That doesn’t quite come out as something exciting and adventure-friendly in itself, so let’s see what happens in the mechanics.

The theme and mechanics of the Circle of the Shepherd don’t really come together, to me. The animal-protecting theme doesn’t carve out an interesting enough space in a fantasy world, the mechanics have a fairly loose connection to that theme, and I’m not really sold on the playstyle or how much this subclass expects you to get beaten down.

Now we’re talking. No matter what kind of druid you’re playing (other than blight druids, because why should Death clerics have all the fun), you can get behind destroying some undead. This is the subclass for people who drop their amateur status and decide to go pro in that field. Don’t worry, they’re cool against other kinds of opponents too.

I would play the Circle of Twilight in a heartbeat. I can’t think of any other way to put that. This subclass has its act together in theme and mechanics. I have a vague concern that Harvest’s Scythe might be too good, but I’d have to see it in use to know. It’s potentially a lot of healing, but you’ve got to pay attention to how likely you are to finish the target off. I would allow this in my campaign immediately.

Finally, we have a variant Wild Shape rule, intended to make the huge variety of options more manageable and provide a clearer path to learning new forms. The text calls out that dinosaurs, saber-toothed tigers, and so on are “more exotic” shapes, and learning those shapes can be a worthy quest goal or reward. That sounds like a cool campaign thing to me, as long as the player doesn’t come into the game with the view that the DM owes it to them to make all shapes accessible in short order.

You start with three beast shapes known, picked from either the Tropical or Temperate lists based on your homeland. Several are marked for the Circle of the Moon only. Each time you gain a druid level, you add one creature from your 2nd-level list. I guess you never get to pick from the 4th-level and 8th-level lists for free, and always have to Observe or Interact with those. Well, druids needed mechanics-side stuff to want, so that’s good with me.

Observing a creature means spending an hour within 150 feet of the target creature, and making an Intelligence (Nature) check against what’s probably not too hard of a DC, but your bonus probably isn’t amazing either. You can even play a bookish druid and get a bonus – advantage on the roll if you’ve read a scholarly work on the creature. If you’ve ever read a (translation of a) medieval bestiary talking about real or fantastical creatures, this is hilarious and you may agree that it’s unlikely to help.

Interaction is the high-risk mode, unless someone else has already put the creature in a petting zoo for you. Okay, I have to admit, I love the idea of a druid seeing an awesome new creature in a noble’s menagerie, interacting with it while the rest of the PCs distract the noble, and starting the petting-zoo jailbreak by adopting that form. Anyway, this is a Wisdom (Animal Handling) check against the same DC, which is probably easier for most druids, but you have to get close enough to risk being lunch. But, spoiler!, you’re a druid, you’ve probably got a spell for this. At first level. It’s called animal friendship.

These rules are a hefty nerf to the druid, but it’s also fair to look at them as a clarification of intent. Overall I like them, but then I don’t have a current druid PC getting my options slashed by this change. I wonder what percentage of druid characters really use the full breadth of their options?

I’m happy to see the druid get UA attention, since (like the barbarian and bard) it is so thin on options in the Player’s Handbook. The core of the class is incredibly stripped down – it’s a spell list and spell slots attached to some fairly minor shapeshifting at all but the highest levels. This means that almost everything with thematic weight has to come from the subclasses, much like the warlock and its two axes of subclass choice (and all that Invocation customization), or the wizard. I’m nonplussed by the Circle of the Shepherd, but Dreams and Twilight are solid expansions on Land and Moon.