ClassesD&D 1eHistory of the Classes 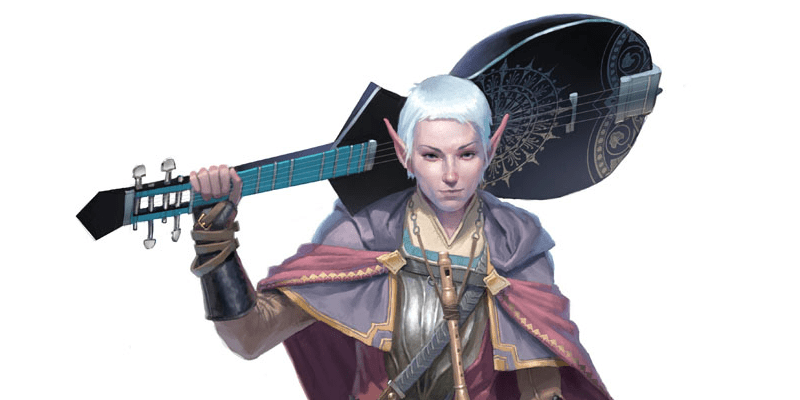 For my introductory post here at Tribality, I’d like to talk about the history of the bard class, from its origins in The Strategic Review (Vol 2, Number 1), down to its 5th Edition incarnation. Buckle in, folks, it’s going to take me a few posts. As with many classes, it has maintained some of the outer trappings over that time while reconfiguring almost every other part of its function.

That original bard class was consciously designed to be a jack-of-all-trades class, a concept that plays a little oddly in OD&D. They’re tolerably tough, with d6s for Hit Dice and scaling up to 10 HD; within OD&D’s context, that’s not bad. A cleric attack progression isn’t too shabby, though they have significant armor restrictions – leather or chainmail only, and chainmail causes problems – for a class expected to do any front-line fighting (this in an era where rangers wore plate armor without penalty).

They also have pretty good access to magic items, which is where some of the oddity of OD&D classes comes in. The designer, Doug Schwegman, didn’t have a better way to indicate categories of magic items that bards could use than to specify that they used a given type of item as another class did. For example, “a Bard may not use any wand, staff, or rod other than those usable by Thieves and Fighters or every class.” Convoluted, I suppose, but as this kind of wording proceeds through other magic item types, the trend that they are both Fighters and Thieves comes clear. In the editions of D&D I’ve played, this would not be that big of a deal, but judging by the care shown to it here, it seems to have been a meaningful class feature. They also use magical instruments more effectively than any other class.

They have some other significant features, too: Lore, Charm, and Thieving Abilities. The Lore and Charm percentages are complicated by a text block of modifiers (oh, how they make one long for a table of modifiers), and the Thieving Abilities are as a Thief of half the Bard’s level. Lore and Charm scale up to 250%, except that there are so many possible penalties that it’s hard to get any sense for what that means in high-level play.

Even this original iteration of Bards has a healthy magic-user spell progression, scaling up to 6th level spells (out of seven spell levels, I think?) starting at 25th level. Honestly, after 12th level, the bard’s other class features are relatively static – they have well over 100% Charm and Lore, and gain only one hit point per level – but their spellcasting potential really starts to take off. It’s interesting, if a little perplexing, to see a class fundamentally change its role in a party over the course of 25 levels. By the highest levels of play, I suspect that a bard could stand in for a magic-user pretty convincingly. What they lack in the most dominating 7th-level spells, they make up for with a solid number of spells per day up to 5th level.

What is this class, taken all together? Off the cuff, I’d say it’s a different vision of the wizard, but with a huge array of improved non-magical options. This is going to become a lot more true in some later iterations of the Bard. Maybe it’s irony and maybe it’s just coming full circle, but I think this is also a fair characterization of 2e and 5e bards. I’ll get to that in a bit. It’s interesting that there’s no attempt here to justify the spellcasting as music and magic being linked, as will show up extensively later. The magical instruments that show up here will recur in every later edition of D&D, but I am pretty sure I have never seen even one of them in actual play.

It seems entirely insufficient to say that the 1e Bard as released in the Player’s Handbook is an odd duck within its system. It’s something that we would now call a prestige class, in that you need to advance in other classes to qualify for it. On the other hand, most prestige classes of the 3.x era didn’t require 5-7 levels of one class and 5-8 levels of another before even beginning the class. Of course, this is in 1e’s punitive dual-classing system, so let me rephrase those requirements as XP totals:

So your first Bard level might require 28,002 to 140,002 XP, and the longer you wait, the more potent you are – those Fighter Hit Dice and Thief skills really pay off in your later career as a Bard. Not to get off into a massive tangent about 1e dual-classing, but XP costs scale up sharply enough between Fighter 7 and 8 that you almost cover the 70,001 Thief XP in that span. All of which is to say that while it is pretty egregious, it’s slightly less so than it looks.

If you came into D&D for the first time with 3.x or later, this won’t make a lick of sense to you, but almost everything about experience points and character levels works differently in 1e than what you’re familiar with, and a full explanation is sadly outside the scope of this article.

Anyway, once you do start your career as a Bard, the rest of your party is probably still facing challenges roughly appropriate to 7th and 8th-level characters… but the Bard experience requirements are more on par with first-level characters, so you might well gain a full Bard level in each of your first adventures as one. The rules against gaining more than one level in a single adventure might, in fact, be a problem for you all of a sudden.

The thing that rankles in all of this is that the player has to plan level advancement far in advance – if you don’t start play knowing that you want to be a Bard, you’re likely to do something to permanently close that door. I would question the out-of-game rationale here, but more than that the in-game one – how can one be too skilled of a fighter to start learning something else? Oh, and the Bard class mentions that half-elves can be bards, but half-elves can’t change classes as humans do – they’re bound to demi-human multi-classing. I conclude two things from this: first, that no one gave this a lot of thought when publishing the Player’s Handbook, and second, that it’s the sort of contradiction that can only be resolved by DM fiat.

Moving on along here, once you do start advancing as a Bard, you learn a total of 15 languages (beyond what you knew from your earlier classes), and gain Charm and Lore percentages, as in OD&D; those percentages do not scale beyond 100%, however, and don’t have involve any particular modifiers. This is a good usability improvement. The bard also gains druidic spellcasting, rather than magic-user spellcasting, which is an interesting thematic change to match the class’s Gaelic roots. It’s also kind of funny to see the Bard and the Ranger as both being fighter/thief/druid blends, while at the same time being quite distinct from one another.

Another oddity: bards advance from one bardic college to another in level bands, from Fochlucan to Mac-Fuirmidh, to Doss, to Canaith, to Cli, to Anstruth, to Ollamh. The text says little about these colleges, other than noting that a bard never associates with one from a lower college, until they reach the rank of Magna Alumnae (23rd-level bard). God help you if there’s more than one bard in a party, of significantly different levels. I doubt this came up much (technically, I doubt it came up even once), but the radically varying options for dual-class progression to enter the bard class means that, 100,000 XP or so into a campaign, you could quite plausibly have a 4th-level bard and an 8th-level bard, staunchly refusing to associate with one another.

There’s a missed opportunity here; each college begins one level after the bard has learned a new level of spells, all the way up to Cli (since bards do not gain 6th or 7th level druid spells). Adjusting the college advancement just one level earlier creates a connection between each college and the new level of spells, and if you can’t get some story-grist from that, I can’t help you. The colleges aren’t linked 1:1 to the use of magical musical instruments – there are level requirements to use the more powerful instruments, but they do not directly correlate.

In a final oddity, the text says it is possible for a bard to advance in the abandoned fighter and thief classes, by using the class-advancement tomes that aid druids, fighters, and thieves, so that you could advance as a fighter or thief beyond your normal limits. It’s unclear what libram you’d use to advance as a fighter, though, as the Manual of Puissant Skill at Arms and Manual of Stealthy Pilfering both call out the fact that bards suffer penalties for reading their words, classifying bards alongside other divine casters. I’m not sure what book would benefit them, when you get right down to it.

The trajectory of the class in these two versions is a refinement of theme, from a general-purposes secondary magic-user to a highly experienced character who then undertakes druidic training. I wonder how many players set out to play bards as first-level fighters, only to have the campaign end before their first bard level, or suffered an ignominious fate when, abandoning their fighter class for the thief class, they had a giant pile of hit points but otherwise had the combat abilities of a first-level thief.

In the next article in this series on character classes throughout the editions, I’ll continue into the bard of AD&D, Second Edition.