Bard College of the Shanty-Master 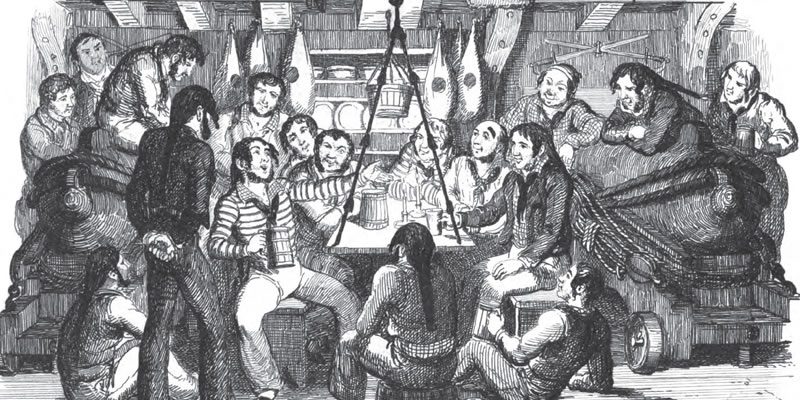 Arrrh Mateys! This week we have a guest post from Mark Cookman of Black Shark Enterprises. If you ever wanted a sea shanty singing bard, then you best be checkin’ out this homebrew for D&D’s 5th edition.

Bards of the College of the Shanty-Master dedicate their lives to traveling the worlds via sailing ships crewed by all the races that sail and from all those peoples the shanty-master bard learns tales of nature, history, and legend lore. Whether leading the crew in a long-haul shanty, playing a hornpipe jig to relieve tension on the fore deck, or telling tales to the lads that gather ’round when the ship makes port, the shanty-master is always capable of captivating the audience with his or her presence. Yet, when the song or tale is done, it’s business as usual. There’s no time for acrobatic bows or passing the hat; the shanty-master is a working man’s bard.

These bards develop a deep loyalty to the ships and the crews that they work with, sometimes greater than that of blood family or closest friend. They still follow orders from appropriate authorities, but are likely balk at anything that somehow puts them against their own ship or endangers their crew. Wise ship captains know the value in keeping a shanty-master working aboard their vessel and would do little that would risk the bard leaving.

The Song of the Ship

The Song of Wind and Waves

At 6th level you learn to master some of the elements with The Song of Wind and Waves. On your next action after a successful performance roll, you may cast either Gust of Wind or Water Breathing. On your next available action you may cast the spell that you did not previously cast. You are not obligated to cast both spells. These spells do not count against your total spells per day and work just as if they were bard spells of the same level, even though they are druid spells made available to the bard through the magic of music. The Song of Wind and Waves can only be sung once per long rest.

The Song of the Fleet

At 14th level you gain the ability to lead your entire ship’s crew to song and with that “song” the ability to inspire other ships in your fleet. After a successful performance roll, you may use your bardic inspiration die to influence other friendly ships in ship-to-ship combat thus affecting the fleet, as a whole. The Song of the Fleet can only be sung once per day.

Mark Cookman is a writer, educator, and jack-of-all-trades with professional experience in Armor Making, Automobile Racing and Repair,  Brewing, Classical Fencing, Delivery Driving, Doughnut Making, and Game Design just to list a few skills.  He has been gaming since 1982 with AD&D 1st Edition.  He is the author of Welcome to Mortiston, USA and the chief cook and bottle washer at Black Shark Enterprises. Mark always has his dice.
Tagsaquaticbardsea-shanty
Previous Article