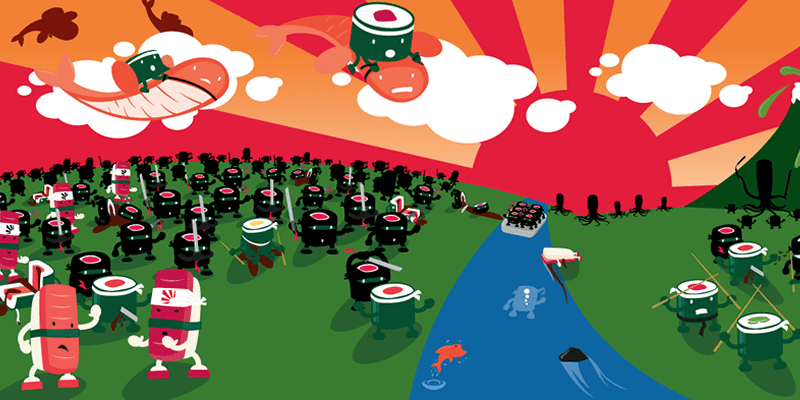 Building a campaign world can be a lot of fun, but it also requires a lot of preparation and creativity. That preparation should start by deciding on a theme for your campaign world. I really like the Wǔxiá (武侠) ideas that are presented in the Dungeon Master’s Guide.  Using that along side my TSR AD&D Oriental Adventures source book, I have a lot of nice ideas to use for a D&D 5th edition game. A Wǔxiá campaign has a lot of information that can easily be pulled from many different sources.  There are several online webpages, video games, movies, books, comic books, and older RPG written materials, but a lot of it has been given the Hollywood treatment so it isn’t as authentic as we think. But it’s close enough for a adventure role playing game. But what is Wǔxiá? It is a large genre of Chinese fiction that literally means martial hero. Typically it tells the story of the adventures of martial artists in ancient China. Heroes rising from the ranks of the common folk. But I really like ninjas and samurai, so I’ve chosen to start the focus for a Wǔxiá campaign on the Japanese medieval culture of Bushido (武士道) instead of starting with a true Chinese Wǔxiá setting. That is until the players move to other regions of the campaign world, and then bring on the Saturday Morning Kung Fu Theater and the Five Deadly Venoms! Seriously. Five! Deadly! Venoms! 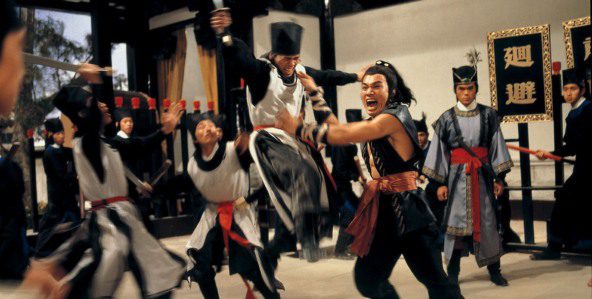 The one scenario that is a typical staple to all D&D games is the tavern setting. Players have their characters shalaxing in the tavern, eating & drinking, and listening for rumors of adventure. I have already had one player mention ordering food and wanting to know what was actually on the menu. Yikes! As a DM stay calm and just improvise. Think about what you’ve seen in movies like Zatoichi, and the Shogun movies. Throw some sake bottles on the table, and rice balls and fish. Pretty good. Add a Geisha and other entertainers, and don’t forget chopsticks and servings of tea. Better.

Afterwards, I wanted to make the setting a little more authentic, and given the opportunity again, I would be better prepared. I then went and started doing research on food found in Medieval Japan.  There was a lot of information out there, and some of it is conflicting and confusing, but it is close enough to give the right flavor to players in the game.

What were the typical foods?  In Japan, harvest from the sea was bountiful including seaweed, fish, clams, shrimp, octopus, and whale meat. Red meat was not part of the pre-modern Japanese diet, and did not become popular until the Meiji Era (1868 to 1912). Meat was frowned upon by Buddhist & Shinto traditions. The most eaten food was rice, and all food revolved around it.

So minimize the meat, lots of fish, and tons of rice. But rice isn’t just rice, because there are different kinds and each caste ate it differently. I need to find some more information.

Rice was a staple and was so important it was also considered a measure of wealth. A samurai’s stipends were paid in rice which could be from 5 koku up to 100 koku. The daily ration for a common foot soldier was thought to be about 900 grams of rice, or 1 koku for the year.

Rice was very important, and in most parts of Asia, the typical greeting of “Hello” that I am used to is replaced with, “Have you eaten rice today?”

Samurai ate husked rice, while nobles preferred polished rice, which they often ate sweetened. Though they grew rice, farmers generally ate millet which looks like bird seed. Rice was an all-important commodity, and nowhere in Japanese culture was frugality more rigidly practiced than among the farmers. 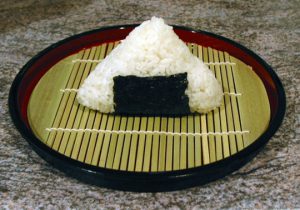 Rice could be used in a number of ways, and was typically steamed.  But it was also boiled, cooked into a paste, turned into sake, and mixed with vegetables. A popular roadside treat was the rice cake, which could be sweetened with honey or pieces of fruit and was wrapped for sale in a large leaf.

The most popular drink among the samurai was sake, a rice by-product. Drinking was common among the samurai class, and drunkenness was not frowned upon. It was sometimes considered impolite not to get drunk at a drinking party.

Sushi was eaten during the medieval period, and it wasn’t until the Edo period that it developed into the sushi we eat today. 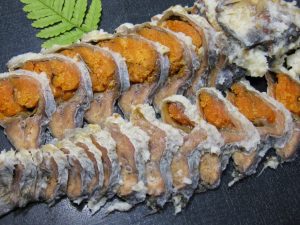 Sushi originated elsewhere in Asia and arrived in Japan around the eighth century. Nare-zushi (馴れ寿司, 熟, aged fermented fish) was the ancestor of the sushi we know today. It was made of salted fish wrapped in fermented rice, and kept for months at a time for preservation under the weight of a stone.  This fermentation could last for years. The rice was often discarded prior to consumption.  Nare-zushi had a distinct smell.  The smell was a cross between blue cheese, fish, and rice vinegar.  It not an attractive smell, even if it tasted good.  Nare-zushi is still eaten today.

Nare-zushi was eaten in Japan for many years, but by the Muromachi period (1337 to 1573) a new type of sushi was becoming popular: Namanare (なまなれ, semi fermented fish). This was raw or partly raw fish wrapped in rice, eaten fresh before it changed flavor. The advent of rice vinegar changed the fermentation time, and reduced the smell of sushi. This new way of consuming fish was no longer a form of preservation but rather a new dish in Japanese cuisine.

In addition to rice, the following foods were eaten when and where available: Potatoes (there were reputedly 24 types), radishes (of which there were nine kinds), cucumbers (fourteen types), beans (which produced the ubiquitous bean curd), chestnuts, persimmons (another popular road side treat), various nuts, tofu, yams (or tororo, which was often made into a soup), sour plums (particularly popular with soldiers on campaign if they could be found), apricots, peaches, apples, oranges.

In a particular pinch, the Buddhist/Shinto injunctions that tended to prohibit the eating of meat could be lifted, allowing the hungry to catch pheasants, wild geese, quail, deer, and boar.

There were Tea Houses that served… Tea.  They were called Chashitsu. But tea could be served anywhere, outdoors, in a monastery, or in an establishment with a Tea Room.  Tea was very diverse and could take up it’s own article on types, ceremonies and such.  Here is a floor plan of a Chashitsu that you could use in a campaign: Chashitsu Floor Plan

A tavern is called a Izakaya.  And they serve food to accompany the drinks.  There are more details to follow when I use ideas of a modern Izakaya to create a menu.

So trying to come up with a menu is not difficult once you understand the foods that are available.  And using a modern Japanese Izakaya as a starting point helps to build up the setting for the players.  Customers sit on tatami mats and dine from low tables in the traditional Japanese style. You will be given an oshibori (wet towel) to clean your hands with; next an otōshi or tsukidashi (a tiny snack/an appetizer) will be served. The snack is not ordered and is given to everyone sitting at the table.  Each person will be charged for the appetizer.  Food and drink are ordered throughout the course of the session as desired. They are brought to the table, and the bill is added up at the end of the session. Food items are usually shared by everyone at the table

Izakaya dining is normally ordered slowly over several courses rather than all at once. The kitchen will serve the food when it’s ready. Delicately flavored dishes such as sushi or edamame are ordered first, followed with progressively more robust flavors such as yakitori or kara-age, finishing the meal with a rice or noodle dish to fill up.  Taking those ideas, a menu can be created:

Having a menu like this saves a lot of time and all I needed to do next is to set prices based on the type of establishment.  This can be found on page 158 of the Player’s Handbook.  The small bottle of Sake should be the same price as a gallon of Ale or a pitcher of Wine at 2 sp and should have about 6 servings per bottle.  Meals can then be taken at their price listed in the PHB, and divided approximately by 3.

I found that the prepared meal that the Samurai would eat before setting out for war was: dried chestnuts , kelp, and abalone (sea snail), served on small lacquered plates – as well as sake. The sake was served in three cups – as the number three was considered good luck. 😉

The following are some more foods with their Japanese terms that can be used to give some more flavor to your own D&D Wǔxiá campaign:

But having a Wǔxiá campaign setting doesn’t mean that the players have to have characters from that setting.  They could be long lost travelers recently arrived from another world, and are strangers to everyone around them.

So after working on this article I want to get some good Japanese food. Some chicken yakitori, miso soup and soba noodles sounds really good right about now.

I used some of the periods of Japan, so here is a summary about Medieval Japan: “The medieval or “feudal” period of Japanese history, dominated by the powerful regional families (daimyō) and the military rule of warlords (shōgun), stretched from 1185 to 1573/1600. The emperor remained but was mostly kept to a de jure figurehead ruling position, and the power of merchants was weak. This time is usually divided into periods following the reigning family of the shōgun.”
Kamajura 1185 – 1333
Kenmu Restoration 1333 – 1336
Muromachi  1337 – 1573
Azuchi–Momoyama 1568 – 1603

5 Ways to Scratch the Gaming Itch ...