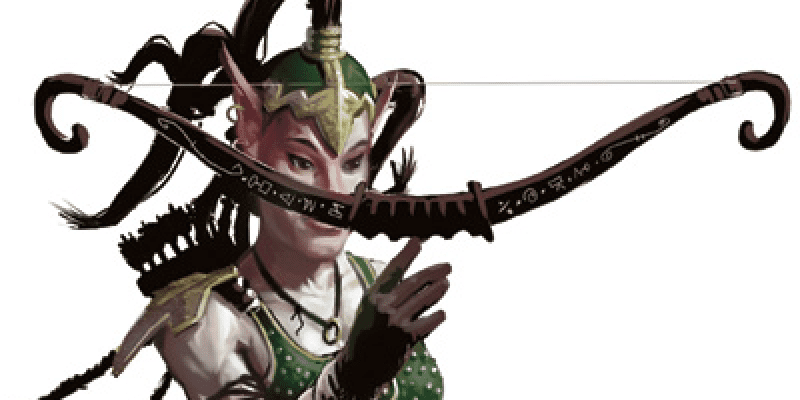 The arcane archer prestige class from previous editions fulfilled a desire in players for firing unique magically charged arrows on the battlefield. For many, the arcane archer became the conduit for channeling our love for archery-based heroes like Green Arrow, Hawkeye, Arsenal, Artemis, and others. Though the existing eldritch knight archetype for the 5th edition fighter can technically be used to create a version of the arcane archer, its powers are more aimed at melee combat.

The eldritch archer archetype is more a clarification or expansion of the standard eldritch knight’s abilities than it is a unique archetype of its own. Many of the changes below apply to any eldritch knight, though the Arcane Sniper option at 15th level is unique to those eldritch knights that choose to focus on ranged combat.

Anytime the eldritch archer is able to learn new wizard spells, including those limited to the abjuration or evocation spell schools, they may instead choose one or more ranger spells from the following list. These spells are considered wizard spells.

Developer Notes: If you’d like your rangers to be the only class with access to these spells, feel free to remove this feature. The other clarifications related to ranged weapon use will still provide the feel of a magical archer.

Weapon Bond
The weapon bond class feature remains the same. Eldritch archers commonly bond one ranged weapon and one melee weapon. Though spells with a somatic component require one hand to cast, 2-handed ranged weapons such as bows and crossbows may be held in one hand while casting a spell.

If you have a bonded ranged weapon in your hand, you may use an action to imbue one piece of ammunition with a cantrip’s arcane power. As a bonus action on that round you may fire the ammunition at any target or location within the weapon’s range. If the spell requires an attack roll, the attack is rolled normally for the ranged weapon using Strength or Dexterity as appropriate, not your spell casting ability. If the spell requires a saving throw, you must make a successful attack roll against either the target creature or the desired point of origin (use a base AC 10 modified by your DM if the target is a point instead of a creature) before forcing the target to make the saving throw.

Whether or not the spell requires an attack roll or a saving throw, a successful ranged attack roll deals damage from the ammunition in addition to the effects of the spell (weapon damage is dealt before applying the spell’s effects, including any associated saving throws). Should the damage be reduced to 0, such as through the monk’s Deflect Missiles class feature or similar effect, the spell’s effects are negated.

Developer Notes: The standard War Magic feature allows an eldritch knight to make a weapon attack as a bonus action after casting a cantrip, which includes both melee and ranged attacks. This feature allows those characters focused more on ranged attacks to perform the same action, folding the two into one shot. Though this ability will significantly increase the range of features like Poison Spray, it also requires that spell to have both a successful ranged attack and a save. With more playtesting, it may be decided to remove the ammunition damage and have the increased range alone be the benefit of this power.

Arcane Sniper
At 15th level, you learn to weave arcane magic around yourself in order to hide your position. After you take an attack action while hiding, you may expend one 1st level spell slot to become invisible until the beginning of your next round. You may expend a 2nd level or higher spell slot to use this ability. For each slot above 1st, the invisibility lasts 1 additional round. Invisibility gained through use of the Arcane Sniper class feature is not broken by attacking or casting spells. This power replaces the normal eldritch knight’s 15th level power.

Developer Notes: This power worked well for us at our table, though at first blush some DM’s are hesitant. If you wish to use the increased spell slots to allow “normal” invisibility, let us know how that works at your table and we’ll fold that into the build.

Improved War Magic
If you have a bonded ranged weapon in your hand, you may use an action to imbue one piece of ammunition with one of your evocation spell’s arcane power instead of casting it normally. Unlike War Magic, the power of these spells consumes the ammunition used before they reach their target, preventing the ammunition’s damage from affecting the target. Otherwise, this feature works as the War Magic class feature.