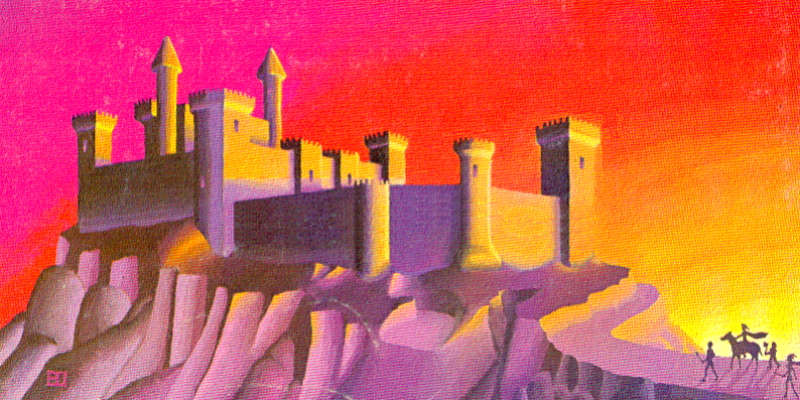 So there have been a TON of modules that were created by TSR for Dungeons & Dragons over the years. The list is truly amazing once you see it, because of all the work and time that went into each adventure module. If you don’t believe me, check out a compiled listing here: List of Dungeons & Dragons Modules

There were some modules that weren’t as fun as others, and they may have played well at a convention, but at home they didn’t. I have my favorites, and I pull ideas from some of these adventure on a regular basis, and add bits and pieces of them into campaigns. Sometimes I just play them outright because they are so good.

If you aren’t playing OSR then you could play with the new D&D 5th edition rule set. I think that all of these modules can easily be converted on the fly to be played with the new edition rules.  But as with any written module, you should be able to take them and use any rule set that your group likes to use.

You can find more D&D information at https://www.facebook.com/groups/DnD5th/

So here are are my Favorites:

#1 B2: The Keep on the Borderlands by Gary Gygax 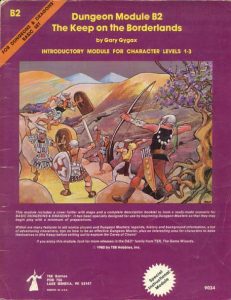 This is the very first adventure module that I played. So, it has to go first on my list of favorites. It has a lot of potential for adventure, leaves a lot of the choices up to the players and the Dungeon Master on how things will unfold in the game.

The players get a base of operations, and head on off to the Caves of Chaos!

There have been a lot of reprints of this adventure, and the setting was brought back for an encounters season a few years ago. Love it! 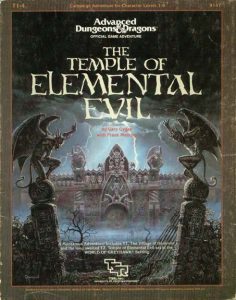 #2 T1-4: The Temple of Elemental Evil by Gary Gygax with Frank Mentzer

“A sinister force, long thought destroyed, stirs from the black hole that spawned it. Like an ebony darkness it prowls the land and safety is but an illusion, for it watches from every shadow and ponders possibilities.”

If you’ve thought about going old school, and playing Tomb of Horrors sounds cool. STOP! It is not cool. Play this instead, because your players will thank me.

It is a great dungeon delve and starts off with beginning level characters for players.

#3 I6: Ravenloft by Tracy and Laura Hickman 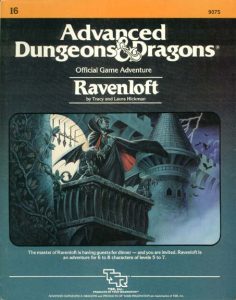 “Under raging stormclouds, a lone figure stands silhouetted against the ancient walls of castle Ravenloft. Count Strahd von Zarovich stares down a sheer cliff at the village below. A cold, bitter wind spins dead leaves around him, billowing his cape in the darkness.”

This is just an solid masterpiece that has upheld throughout the years.  I was tempted to make it #2 on my list, because of it’s popularity, but like Elemental Evil just a little bit more.

By the way, I’m still searching for a Torakka deck to use with the game, so if you have one, hook me up! 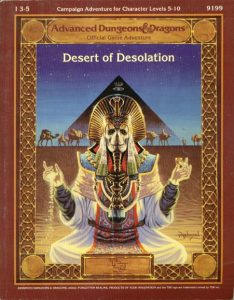 #4 I3-5: Desert of Desolation by Tracy & Laura Hickman, and Phillip Meyers

Desert of Desolation includes three complete adventures, and is a culmination of several authors.  It happens to be a great Egyptian themed adventure with lots of lessons on life. Tracy Hickman said about the Pharaoh, that his “apparent misery to which this figure was condemned by his own lust for wealth continues to teach the value of deeds over possessions to all who play that game today.” 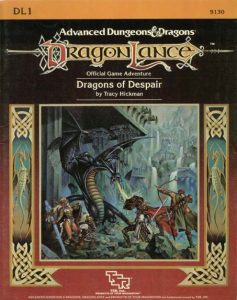 A great intro adventure for players into the world of Krynn, and even comes with generated characters. The module begins by pointing out what is different in Krynn, and quickly dives into hostility with draconians.

A little flowery wording, but you can’t lose with this one. 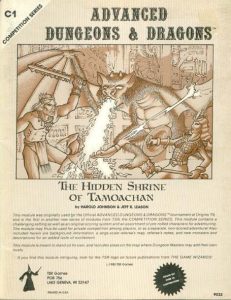 This module was originally used for the Official Advanced Dungeons & Dragons tournament at Origins ’79. The adventure is a dungeon crawl that has several puzzles, but not a lot of combat.

What I love about this is the amount of research that they to do to create the settings in the module. There are pictures of the rooms like what can be found in the Tomb of Horrors module, which can add a lot of flavor to the adventure. 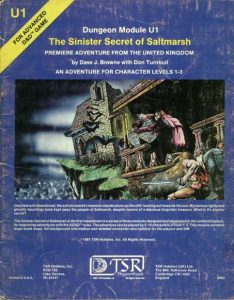 #7 U1: The Sinister Secret of Saltmarsh by David J. Browne with Don Turnbull

“Desolate and abandoned, the evil alchemist’s mansion stands alone on the cliff, looking out towards the sea. Mysterious lights and ghostly hauntings have kept away the people of Saltmarsh, despite rumors of fabulous forgotten treasure. What is its sinister secret?”

I’ve already seen a D&D 5th edition conversion for this module.  This is a low level adventure that takes the players to a Scooby-Doo adventure! Rut Rho!

“Lost in the desert! The only hope for survival is a ruined city rising out of the sands. Food, water, and wealth await heroic adventurers inside an ancient pyramid ruled by a strange race of masked beings.”

An introductory module that takes beginning players into a lost pyramid in the middle of the desert. The adventure leads the players down the levels of the pyramid and is open-ended for the Dungeon Master to add his own D&D magic. 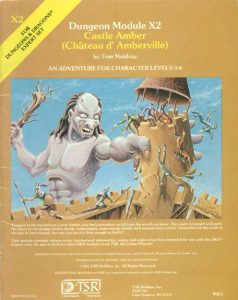 “Trapped in the mysterious Castle Amber, you find yourself cut off from the world you know. The castle is fraught with peril. Members of the strange Amber family, some insane, some merely deadly, lurk around every corner. Somewhere in the castle is the key to your escape, but can you survive long enough to find it?”

A haunted mansion, a Brain Collector, and a crazy family. Yes! 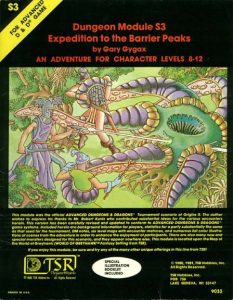 #10 S3: Expedition to the Barrier Peaks by Gary Gygax

This adventure was written by Gary Gygax to create a story arc to lead to TSR’s game “Metamorphosis Alpha” (a science fiction RPG). The players find and explore a marooned spaceship. It demonstrates how one might undertake science fiction/fantasy crossover.

If you want sci-fi in your game, read this module. And if you understand the complex lethal item chart, then you deserve a cookie. 😉 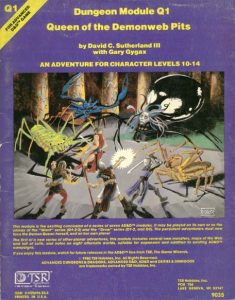 #11 Q1: Queen of the Demonweb Pits by David Sutherland and Gary Gygax

“How different things seem now from when you undertook the crushing of a few rebellious hill giants! What seemed a simple adventure has turned into a major expedition. Much time has passed since you discovered the conspiracy that led you to the frost giants, fire giants, and eventually to the long-forgotten Drow. Through your encounter with the dark elves, you have found the true source of the evil — the demon queen Lolth! ”

Queen of the Demonweb Pits is a sweet adventure, and the final in a seven module sequel to giants and descent. It gives a peek in the abyss full of demons, they end up fighting Lotlth and mechanical spider. 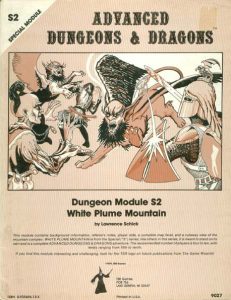 “White Plume Mountain has always been a subject of superstitious awe to the neighboring villagers. people still travel many miles to gaze upon this natural wonder, though few will approach it closely, as it is reputed to be the haunt of various demons and devils. The occasional disappearance of those who stray too close to the Plume reinforces this belief”

This is a classic dungeon crawl adventure, where the players are searching for 3 intelligent magical weapons. There was a sequel written, that continues the story that you may also want to look at if you like this one. 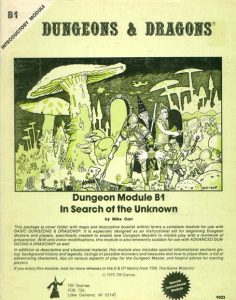 There is an adventure background sheet for players to read, rumor tables (true & false) for the DM to give out, treasure tables, and monster tables.

Very enjoyable dungeon delve to run as a DM and for players. Lots of room for the DM to improvise, and create his own flavor with the adventure.

#14 S4: The Lost Caverns of Tsojcanth by Gary Gygax 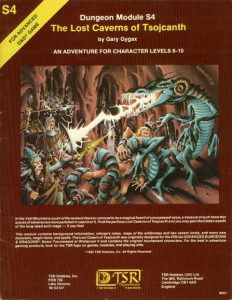 “In the Yatil Mountains south of Perrenland there is rumored to be a magical hoard of unsurpassed value, a treasure of such fame that scores of adventurers have perished in search of it. Find the perilous Lost Caverns of Tsojcanth and you may gain the hidden wealth of the long-dead arch-mage – if you live!”

This is a cool adventure with lots of stuff. It introduced some new elemental monsters like the Scrag (Marine Troll).

After looking at the list, I think I have just about every D&D setting that you need. If you see one that you think is better, let me know, and I will add it to my reading list.

Even if you don’t plan to run these modules with your group, I think that it is good to read through them and get ideas for your games.

Want to get the adventures listed above? Here are link for your convenience: