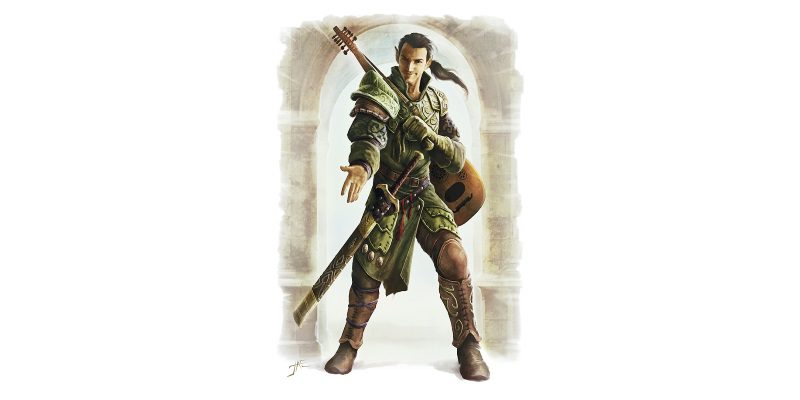 At last, we come to Act V in the drama of the Bard. The narrative arc to date has been… more of a picaresque than anything, with movements in many conflicting directions, often contradicting earlier developments. In Act I (OD&D and 1e), we established the conflict: what the hell is this class? Is it a pseudo-wizard with reduced-but-potent casting progression and percentile skills? a proto-Prestige Class? In Act II (2e), we see that the class’s bread-and-butter is its deceptive potency, as a superficial weakness is bolstered by a massive advancement advantage that would be easy to miss. The third Act (3.x) attempts an initial resolution of the dialectic. It fails, with drama! The class has a place, but if all classes are equal, the bard is a little less equal than others. Act IV (4e) propounds a new theme, raising the stakes for Act V (5e). Yet ever as we listen, shall we come to a deeper understanding, and increase in unison and harmony?

Thematically, the Bard looks back to the 3.x Bard more than the 4e Bard. This is true of a lot of 5e classes, and (sorry, hardcore 4e fans) contributes to 5e’s runaway success in the marketplace. It’s a head fake, though: mechanically, this is a 4e Bard who found Daddy’s credit card and the keys to the Mercedes.

So that’s pretty much 5e’s Bard. Between its two subclasses, five ability score/feat selections, and 6-8 Magical Secrets picks, there is not a hell of a lot this class can’t do, though it can’t do all of it simultaneously. They don’t have the magical staying power of the other primary caster classes – it’s the same spell slot progression, but without Arcane Recovery, Spell Mastery, and Signature Spell; Natural Recovery; sorcery points; or Channel Divinity, they’re going to run out of spells earlier. It’s not inconceivable to burn through all 22 spells in a day, though it helps a lot that the Bard has other abilities to fall back on when the spells run out. Maybe the one class role they don’t fill as well is single-target damage output, but they could fake their way even into that with a clever spell selection – the various smites are good choices here.

Compared to the 4e Bard, this class retains its place as a viable leader and healer for the party; Bardic Inspiration comfortably competes with bless and bane as a way to manipulate the fight in your party’s favor. I’m guessing the tenor of the gameplay changes pretty substantially at 5th level, as Bardic Inspiration shifts from per-long-rest to per-short-rest. In 5e, I feel like a party of all Bards is a surprisingly workable combination, and the sheer amount of bonus and penalty dice (to basically every type of roll) they would hand out with Bardic Inspiration should cover for any shortage of hit points, damage kickers, and so on that they might suffer.

In short, I love what this class has to offer. I’m surprised there are so few proprietary Bard spells – vicious mockery and compulsion are all I’m noticing. That’s not a big deal, really, but considering how many they had in 3.x, and how many Bard-only rituals there were in 4e, it’s unexpected. The resolution in this, Act V of the Bard’s drama, is favorable: a synthesis of disparate themes into a whole that is both robust and versatile. It carves out a conceptual space that isn’t just standing a short distance from the action strumming a lute, and plays to archetypes that run deeper than D&D: the trickster and the inspiring champion. For most tasks, there is still some other class more perfectly suited than the Bard, but the Bard does 75-90% as good of a job, while also providing benefits not found anywhere else.

One last note, for people hacking the classes: if I wanted to build a Warlord class without using the Fighter/Battle Master option, I’d take the Valor bard, reduce some of the emphasis on skills, and change spellcasting around to be Warlock-like, with spells actually being per-short-rest Gambits.

This concludes my series on Bards. Tune in next week as I start in on Druids.