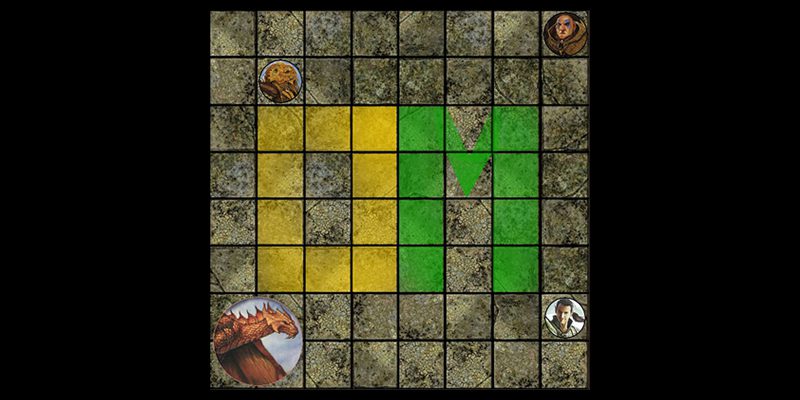 At Tribality, we’ve been interviewing some of the people who are behind all the awesome stuff that is being created for tabletop gamers – such as podcasts. I started listening to the Dungeon Master’s Block podcast a few months ago and was really excited when Mitch and Chris said they be interested in an interview. The Dungeon Master’s Block is a podcast that puts the “focus on the dungeon master, the most important person in the game.”

Before we talk about gaming and your podcast, can you tell us a little bit about yourself?

Chris: I’m 24 years old, engaged to be married, seminary student and pastor, resident of Grand Rapids Michigan. My favorite movie is Dead Poet’s Society and my favorite band is U2.

Mitch: In high school although I was a nerd, I never braved the tabletop world. It wasn’t until college when Chris invited me to a D&D game I even considered it, and even then my plans were not to enjoy playing…but to play an evil character and troll my friends. While I certainly did that…I ended up falling in love. Ever since D&D has been a huge part of my life. You may even call it an obsession.

Chris: I remember sitting in the middle school library reading a book, it was probably a book from the x wing series or something, and overhearing these guys talking in these really strange voices.  I knew each of the guys and decided to listen in closer and realized that they were playing a game of sorts.  I remember walking over to the side where the DM sat, and I found out at that moment in time it was not okay to be on that side of the screen if you were a player.  He handed me a gnome character sheet and the rest was history.

When did you first take on the challenge of being a dungeon master/gamemaster? How did it go?

Mitch: It came about out of necessity. My friends and I were playing D&D one night, and the DM had to leave. It was only around eight at night…which we all know is early for D&D. Instead of calling it a night, I decided to try my had at DMing. I had found Nirvana. Once again I was in love, and have never been the same.

Chris: I played on and off through high school and college but about a year ago I started playing again every week.  I started having the itch to DM shortly after that and began work on my world of span this shortly after that.  The first time went well.  I planned way more than I should have and I learned that day that things don’t always go the way the DM plans! I will say this it was a blast and it has been a blast ever since.

What responsibilities of being a dungeon master do you find easy and what’s an ongoing challenge for you?

Mitch: I find improvisation and humor to be areas that I shine in when behind the screen. I love creating a world, its history and lore. I would say the hardest part of being a DM is when issues leave the characters and begin to infect the players, and I feel the need to be a counselor, as well as a DM. Never a fun part of the job.

Chris: Creating an over arcing story is the easy part for me.  I enjoy planning for every week and planning out future events in Panthia.  The hard part is remembering how all of the rules work off the top of my head. But that is not the worst thing in the world.

Mitch: Gamemaster, hands down and no questions asked. When I see the excitement in the eyes of my players from something I created being presented to them…theres no greater feeling.

Chris: I would say for me it depends on who the game master is.  Overall I would say game master, but if someone can weave an intricate story and not completely suck as a DM, then I genuinely enjoy my time as a player.  Game master overall though.

Mitch: Honestly, not really. If I had to choose I would say wizard, but I need to constantly change things up. The personality and quirks of the character are what make me interested in role playing them. I will however admit though that I shy away from playing elves.

Chris: I love to play dwarves for some reason.  I am not sure where this obsession came from, but I like to indulge in some dwarves adventuring from time to time.  I would have to say DND type fantasy is my favorite, but I did see a fallout set of rules recently and I think that post apocalyptic with those rules would be awesome.

How did you end up deciding to record the Dungeon Master’s Block podcast?

Mitch: I am a podcast junkie, and there are plenty of D&D podcasts out there. But what I found myself longing for is a podcast that focused on story, lore and ideas more then rules, or just another actual play pod. One day I realized, “Hey…I love to talk…I love pods…I love D&D…destiny is calling me.” Chris had recently started DMing himself and I thought that together, we could make a pretty awesome team. That’s how that story began.

Chris: I remember Mitch saying something about a podcast back in January of last year I want to say and then I brought it up again in June and we went out and bought a microphone and here we are today.  We wanted to give a place for people to ask questions, explore new options of how to DM and help them meet other DM’s in the process.

Your podcast provides great advice for new or experienced DMs. If you could only give one piece of advice to a new dungeon master, what would advice would you give?

Mitch: Don’t let the rules scare you. They are there to help you…not hinder you. It’s ok to learn as you go.

Chris: Learn how to improvise.  Things don’t always go to script so having either random tables to help with this or however you want to improve at improve do it.

Can you tell our readers about some of the topics you have covered? Can you give us a sneak peak into an upcoming show?

Mitch: We have a lot planned. As far as a sneak peak…keep your eyes and ears peeled for our next Creation & Inspiration. More top tens to come and even a special guest or two…

Chris: We have covered World Creation, helping players create characters, villains, how to bring Magic the gathering into DnD, death and dying and how to handle it.

Your podcast’s release schedule wasn’t very regular for your first few episodes. What made you decide to start pushing hard to release a show each week?

Chris: Once people started telling us they wanted more we decided to give it to them.  We had a few review that said they loved the show and wanted it to be more consistent. So I guess in a nutshell the DM community are the ones who helped motivate us.

How many episodes do you record each recording session?

Chris: Usually only one.  Sometimes we do bits and pieces from other episodes.  These are times where we record and hang out at the same time so it can take a little while, but it is a blast.

Both of you are running completely original worlds (Aatos and Panthia)? Can you tell us about your world(s)?

Mitch: Aatos is a world of magic and wonder. The gods play a central part in it’s history. In fact we have played in 2 different campaigns that cover 2 different  Aatos’es and their histories. In one, a war between the gods ended in total destruction of Aatos, and in another a council of gods was called to settle their differences, but after the war mortals started to shy away from worship of gods who used their world as a battle ground. I enjoy the idea of gods being flawed, and that plays a huge part in the world of Aatos.

There’s a lot more to tell, but I suppose you will need to tune into the podcast to hear more.

The southern continent is divided in two by a large jungle that splits it in half.  It is treacherous to travel through and the main roadways through it are crawling with bandits and worse creatures.

Are there any published settings you enjoy? Do you ever look to published adventures for ideas?

Mitch: I am a huge Forgotten Realms fan, and I glean a lot of inspiration from that setting. I love the Drizzt book series by R.A. Salvatore.

Chris: I enjoy looking through the lore of the Forgotten Realms and Greyhawk in particular.  The mind of Ed Greenwood especially has created some amazing stuff.  I can only hope that I can create half as much good stuff for Panthia.

Can you tell us a bit out what games/rules you’re playing right now?

Chris: I am DMing a 3.5e campaign, but my next campaign I am working on is going to be 5e. Can’t wait to break out the books for that campaign.

Chris: The community has been awesome thus far.  Wouldn’t be where we are without them.