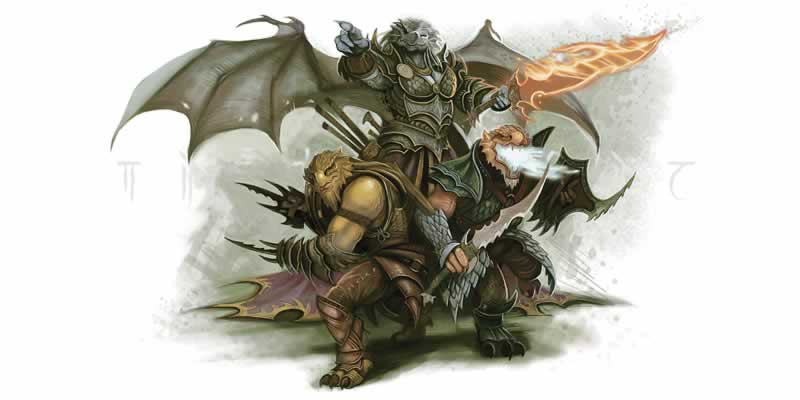 Though it’s true that dragonborn who choose a career in adventuring are commonly those born with the strength, charisma, and breath weapons of their ancestors, not all dragonborn are gifted with those particular abilities. Some dragonborn use their social skills to gain honor and benefit from ruling councils. Some hold their ancestors more primal fighting instincts. Others are adapted to the arctic, mountains, or oceans.

Below you will find a variety of alternate racial traits and ability score bonuses that help to differentiate between the species of dragonborn. Some campaigns may even choose to have the various subraces live in their own countries with different religions and political goals instead of them all living in one land.

The range of powers, skills, and ability score increases presented below would also allow for an entirely dragonborn campaign with no, or few, other humanoid races.

All dragonborn may choose from the Draconic Senses or the Winged traits in addition to those traits listed below.

Aquatic Heritage (Black, Bronze, Gold, Green)
The coasts, islands, and deepest ocean trenches are as home to you as the metropolitan cities of the dragonborn lands. You can breath both air and water and you gain a swim speed of 30 feet. You also gain darkvision to a range of 60 feet and proficiency with Athletics checks.

Desert Heritage (Blue, Brass)
Your anatomy and instincts are those of an ambush predator. You gain a burrow speed of 10 feet and you can hold your breath for a number of minutes equal to your Constitution score (not your Constitution modifier). You also gain proficiency with Stealth checks and Survival checks.

Draconic Senses (All)
You have inherited the dragon’s natural senses. You gain darkvision to a range of 60 feet and proficiency with Perception checks. In addition, as a bonus action, you can gain the benefits of blindsight to a range of 10 feet for 1 minute. Once you use this ability you may not use it again until you take a long rest.

Mountainous Heritage (Copper, Silver, Red)
You are built for traversing rugged terrain and treacherous mountains. You gain a climb speed of 30 feet and proficiency with Athletics checks. You may double your proficiency bonus on any Athletics checks you make.

Polar Heritage (Silver, White)
You are built for crossing icy ledges, slippery mountainsides, and frozen lakes. You gain proficiency with Athletics and Acrobatics checks. Choose one of these skills; you gain double your proficiency bonus with that skill.

Primal (Black, Blue, Green, Red, White)
You prefer your meat fresh and your combat personal. You gain a bite attack that deals 1d4 point of piercing damage, plus your Strength modifier. When you take an Attack action, you may use a bonus action to make an attack with your bite. At 5th level, you may charge your bite attack with the same elemental energy you are resistant to. When you do, you deal an extra 1d6 elemental damage and your bite is considered magical. You may charge your bite a number of times equal to your Constitution modifier before taking a long rest.

Regal (Blue, Gold, Silver, Red)
The dragon’s impressive bearing and royal demeanor runs through your veins. You gain proficiency with History and Intimidate checks. Choose one of these skills; you gain double your proficiency bonus with that skill.

Socialite (Brass, Gold)
You were born bearing the metallic dragons’ kindness, compassion, and love of conversation. You gain proficiency with Insight and Persuasion checks. Choose one of these skills; you gain double your proficiency bonus with that skill.

Trickster (Green, Copper)
Whether your humor is good natured or malevolent, you lean toward deception and trickery. You gain proficiency with Deception and Sleight of Hand checks. Choose one of these skills; you gain double your proficiency bonus with that skill.

Winged (All)
Far rarer than breathing fire or lightning, the gift of draconic wings is one that raises you to royal status. You gain a flight speed of 30 feet. At 11th level, this flight speed increases to 50 feet.

Designers Notes: The only racial abilities possessed by the dragonborn are their resistance and an increasingly dangerous area effect breath weapon that recharges on short rests; a powerful ability. Removing their breath weapon, it was important to compare alternate traits to another race that also possesses resistance. In this case, the tiefling.

In addition to their resistance, tieflings possess: darkvision, a bonus (non-damaging) cantrip, a bonus damaging 1st level spell at 3rd, and a bonus non-damaging 2nd level spell at 5th. As we are replacing the breath weapon, non-damaging cantrips and spells feel like appropriate swaps, as well as skill proficiencies and movement modes. In the case of Wildling and Shifter traits, these were straightforward.

It’s important to compare certain abilities to other races as well. For example, the human alternate traits grant a bonus feat and a bonus skill (potentially 4 skills if Skilled is taken), but their stat bonuses are reduced to +1. Granting 3 skills may be too much in addition to their +2/+1 ability score increases, but only 2 skills is too few to trade for a breath weapon. Granting one of those skills a double proficiency bonus makes the trade more interesting and keeps the build focused on a theme.

The Primal trait brings back some damage taken away by removing the breath weapon, so changing the flavor while keeping the balance was important. Though two-weapon fighters can make an off-hand attack with light weapons and probably wouldn’t take this option, the Primal trait allows melee combatants who use a two-handed weapon, ranged weapon, or weapon and shield combo to make a minor melee attack as a bonus action. Assuming a 16 Strength, the bite provides 4-7 damage, and up to 6-11 with a 20. Spread over several rounds, this can be a significant, though not unbalancing, amount and gives the feeling of the in-your-face personal combat you would expect from a chromatic dragon. At higher levels, the extra damage and magical effect of the elemental charging allows the bite to be effective without an unlimited number of uses.