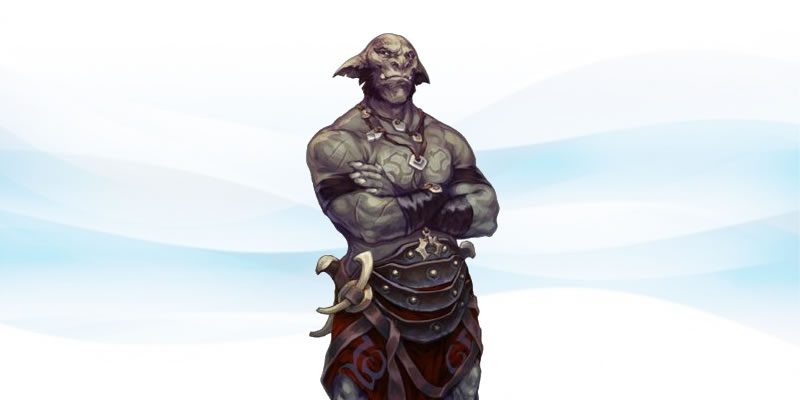 Koalinth (the name is both singular and plural) are marine goblinoids closely related to surface-dwelling hobgoblins. They stand about 6-1/2 feet tall, with sleek, muscular bodies. Their fingers and toes are webbed, and they have gill slits in their necks. Their skin is light green and covered with patches of dark green, aqua, or blue hair. Male koalinths also share the aggressive behavior and loud bellow of elephant seals (although female koalinths are by no means passive).

Koalinth, like surface-dwelling hobgoblins, live in a rigidly organized, militaristic society. Their tribes are fiercely territorial and war with each other and with other aquatic races when their territory is compromized. They make their homes in caverns in shallow waters, ranging from subarctic to tropical seas. Like surface hobgoblins, koalinth supplement their own numbers with trained mounts, beasts of burden and war-trained bestial allies such as orcas, whales, sharks, and giant turtles.

Even moreso than hobgoblins, koalinth have a strong mercenary streak. Merfolk and locathah have both been known to hire koalinth mercenaries to help them fight against sahuagin and other threats. Koalinth are not as hateful toward aquatic elves as hobgoblins are to high elves; as far as the koalinth are concerned, the elves are just another race to fight for or against.

The discipline of military life is a part of koalinth upbringing and is integral to their identities. Even those who have renounced the evil of their culture still think of life in military terms: conversations are attacks and counter-attacks, journeys are hauls, and surprises are ambushes.

Koalinth believe that they were created from surface hobgoblins by Maglubiyet, who sought to conquer the ocean depths. However, the newly-created koalinth were approached by Panzuriel, the Lord of Krakens, who proved himself the true master of the deep and the koalinth remain his loyal servants to this day. Koalinth frequently work with other worshipers of Panzuriel, such as merrows, scrags, kapoacinths (marine gargoyles), and rogue sahuagin, and view the great krakens as sacred. However, most koalinth are uneasy around fire, the element of Maglubiyet Fire-Eyes.

References: “Heroes of the Sea” by James Wyatt, Dragon Magazine #250, with additional information provided by the D&D Wiki and myself.

Ability Score Increase. Your Strength score increases by 2, and your Constitution score increases by 2. Your Intelligence and Wisdom scores each decrease by 1.
Age. Koalinth have the same lifespan as surface hobgoblins, reaching maturity at 16 and living nearly a century if not killed in combat.
Alignment. Koalinth are naturally drawn to order and structure, but have a cruel streak that is difficult for them to fight. As such they are most often lawful and evil, though neutral koalinth are not uncommon. Koalinth PCs likely separated from their culture for reasons born of a difference of temperament or morality and may be of any alignment.
Size. Koalinth range from 6’-7’ in height. Your size is Medium.
Speed. Your walking speed is 30 feet; you have a swim speed of 40 feet.
Darkvision. You have darkvision to a range of 60 feet.
Military Advantage. Trained to work in units, koalinth learn to take advantage of distracted opponents. You may deal an additional 1d6 damage to any opponent that has one of your allies within 5 feet of as long as that ally isn’t incapacitated.
Koalinth Weaponry. You have proficiency with short swords, heavy crossbows, tridents, and nets.
Limited Amphibiousness. You can breath both air and water. You may exist normally out of water for up to 2 days depending on heat and humidity. After 48 hours, if you do not submerge in water for at least 1 hour, your hit point maximum is reduced by 5 every hour you remain out of water.
Languages. You speak, read and write Goblinoid as well as one other language (typically Common or Aquan)

Battle master fighters and both clerics and druids of Panzuriel, Lord of the Krakens are common. Of course, the aquatic cleric, paladin, sorcerer, fighter, druid, and ranger archetypes from the Aquatic Builds series are also available to koalinth.

We’re always looking for playtesters for our races, classes, archetypes and other designs here at Tribality. Wizards had the benefit of 175,000 playtesters over 2 years to get their ideas to the table; clearly we don’t have that luxury. Each of our builds are as balanced as we can design with a small playtest group and over a century of gaming XP. We are always excited to hear when players get these ideas on the table and provide us with constructive ways to make them better.