I have the Marvel Dice Masters game, and was very excited to hear that a D&D Dice Masters game was being released next month.  Dice Masters is a very quick game that uses dice to build a force that you then attack the other player’s force.  It is very similar to Magic the Gathering where you have choices in your dice & cards and you build a . But there is a random factor that you don’t necessarily get in MtG game from rolling dice. The game is a collectible with random expansion dice packs, but I think the dice packs are 1$ each, which makes just the right price to get a set of dice that is very competitive. The foil packs come with 3 sets of dice and their corresponding cards.

You can download the rules here: http://wizkids.com/rules/DDDM1_Rules_WEB.pdf, and there are videos on Youtube that explain how to play the game.

Here is WizKids’ copy for the game description:

Dungeons & Dragons Dice Masters: Battle for Faerûn is a game that utilizes WizKids Games’ proprietary Dice Building Game platform in which two players take the role of warlords, collect and assemble their “party” of adventurer dice and battle in head-to-head gameplay. Each turn, players roll the dice to see what resources they have available, buy dice, send their party members into the field, and then strike at the enemy warlord. There are multiple cards available for each type of die so players get to choose which one to use. This lets players specialize dice to suit play style.

Additional cards and dice to expand your collection can be found in expansion packs. Each Foil Pack contains two cards and two dice that players can add to their Dice Masters Battle for Faerûn collections. Players can create teams of their favorite fantasy characters from the Forgotten Realms universe. You can expect to see some of the most recognizable monsters and characters, such as Kobolds, Beholders, Mindflayers, Dragons, Drow, and many more!

Here is what you get in the starter set, which is typical in the other Genre starter sets

Affiliations for this set are:

Alignments (introduced in this set) are:

The cards and dice look very cool.  I love the artwork that they’ve chosen, and the icons for the dice are Iconic! Here are some samples: 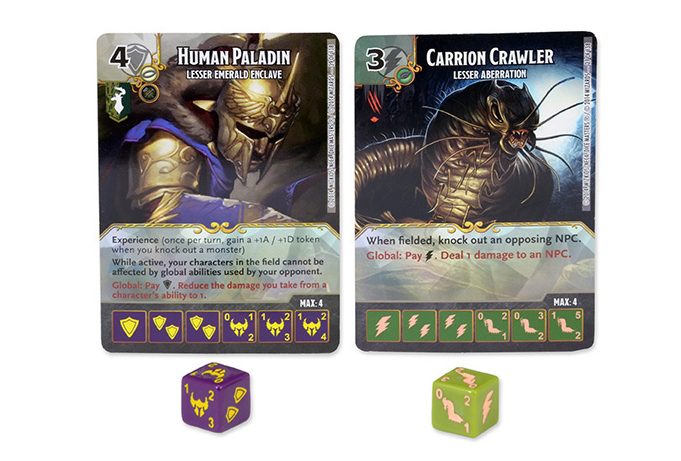 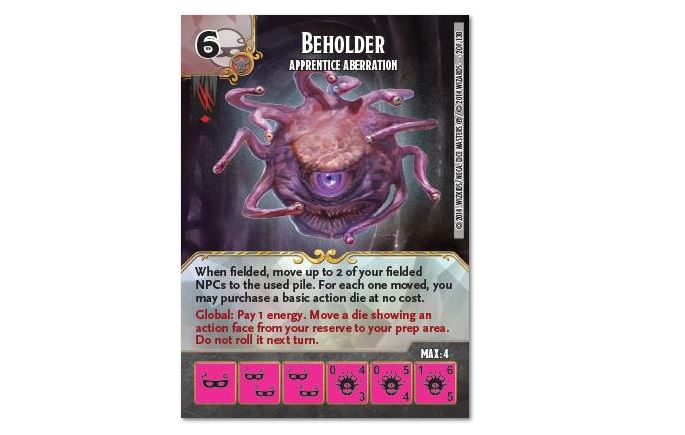 I have the Avengers vs X-men, & Uncanny X-Men Marvel Dice Masters game, and I will be able to play that with the D&D Dice Masters Game.  Because the game integrates with all the other Dice Master genres, so you could have Iron Man battling a Troll on the battlefield.  Right now there are several genres:

So, I am pre-ordering the game, and I plan to mix it up with my current Marvel Dice Masters game. I play with my son, and he wins about 80% of the time.  Maybe this will give me an edge and I will be able to do better in the future. Probably not… He’s just too good.