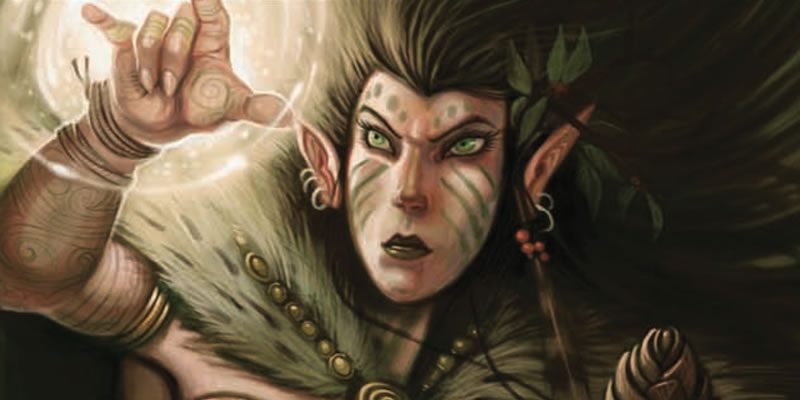 In last week’s article, we saw the likely zenith of the Druid class’s power, relative to the other classes in the game. Of course, we have two more editions to get through, so if I’m wrong, I willow someone an apology. Possibly Mike Mearls, since it’s his hand at the elm. The 4e Druid is not at all disappointing on potency, but it is a radical shift in theme and style. The 4e Essentials Druid, on the other hand, is there for anyone who pines for the Druid of earlier editions.

I’ve always found it berry interesting that 4e positioned the Druid as the Primal Controller – the Primal source is obvious, once you accept that they’re separate from Divine power, but looking back at 3.x and prior could give equal weight to a Leader role – and in fact the Shaman feels like aspen on the Druid from an alternate universe, with its animal companion and heavy elemental influence. Thanks to its emphasis on shapeshifting, the Druid also dabbles in the Striker and Defender roles – I don’t think it would go too far to say that the Druid is the true jack-of-all-trades in 4e. Of the other Primal classes, only the Barbarian (Striker) feels like it definitely isn’t a Druid specialized in a different job: the Warden’s tie to nature and form-shifting feels plausibly like a warrior-druid, while the Seeker is what happens if you take an Arcane Archer and substitute in a Druid. (Let’s see if they notice.)

The multi-faceted structure of the Druid class pulls back the design veil on the Controller role: in some ways it’s the least defined, or definable, role of 4e. It does modest damage to large groups, tosses out minor conditions to large groups, uses lots of forced movement or induced movement on enemies but almost none on allies, or seriously screws over and locks down individuals (without doing all that much damage to individuals, because that’s the Striker’s job). Much like the 4e Wizard, lots of Druid powers rely on zones and walls modifying the battlefield. This much the class definitely has in common with its forebears of previous editions.

The Druid class branches into two options in the Player’s Handbook 2 – and I’m sure there was tons of birching about the fact that it wasn’t in the first Player’s Handbook of 4e. Let’s get something out of the way: the 4e Druid is openly inspired by the World of Warcraft Druid. Though It maple some people away from the class, I don’t see this as a bad thing at all – one of my favorite WoW classes inspired one of my favorite 4e classes. They kept the extreme fluidity of shapeshifting, reverting to caster form for many abilities, and the defense/offense split. Where WoW has bear druids and cat druids, 4e has Guardian druids (improved AC, and powers that generate the marked condition) and Predator druids (improved speed, and powers that kick out improved damage).

Actually, I’m oversimplifying a whole lot when it comes to 4e Wild Shaping. There’s at-will Wild Shaping, which gives you a deliberately-generic beast form without any special traits other than letting you use your Beast Form keyword powers. This doesn’t let you turn into anything that can fly like a bird, swim like a fish, breathe water, squeeze into small spaces like a mouse, or any other miscellaneous animal functions. For that, you have to use a Utility power such as Skittering Sneak or Black Harbinger. This is vine for gameplay, but kind of dodgy on the theme and story front. Yew can view it as borrowing from the rule, found in OD&D through 2e, that Druid shapeshifting is limited to one bird, one reptile, and one mammal, but the thematic contrast with the at-will Wild Shaping into Beast Form is striking.

If you’re expecting anything like the 3.x Druid, the Player’s Handbook 2 is not done offending your delicate sensibilities. Summon nature’s ally? Not found here. (You want Primal Power, the splatbook for Druids and other Primal-source characters. Obviously.) Animal companion? I rather think not. Healing? Not easy to come by, though not entirely absent. In the right situation, Fires of Life is an absolute rockstar of healing generation. If providing some healing is important to you, though, multiclass feats are here fir you. The first healing Utility power shows up at 16th level – it’s simply not something 4e cared about supporting.

Primal Power adds Swarm Druids and Summoner Druids as available builds. These do more or less what you’d expect from the name – the first is an alternate Wild Shape that triggers lots of people’s real-life phobias, while the second summons creatures that do what you say, if you spend your action on it. Otherwise they follow an Instinct that may or may not be helpful, such as “attack the nearest prone creature.” It’s a good reminder of why 4e at initial release stayed away from summons or pets: balancing out the advantage in the action economy makes the summoned or companion creature much less desirable than people have been trained to expect. In the 4e format, though, these summons are oak-y, as long as you want sustained rather than burst damage from your Daily power. Just… if you’re going to use Summon Storm Behemoth, make sure you give it work to do. You won’t like it when it’s bored.

Depending on how you feel about the PH2 Druid, the Essentials Druid either spruces things up or leafs the best ideas behind. There are two very different versions of the Essentials Druid, for that matter: Heroes of the Fallen Lands and Heroes of the Feywild. I’ll be looking at the latter, as I don’t have the rules for the former to conifer with, beyond knowing that it’s a Leader rather than a Controller. As with the 4e Bard, I mostly feel that the 4e power format is a damned awkward way to express more 3.x-based rules concepts. Sacrificing the PH2 Druid’s Wild Shape is a dealbreaker for me. It’s the thing I loved about the class, because it made me feel so wonderfully cinematic with every action I took. Maybe the Heroes of the Feywild Druid can bottle that lightning again in some different way, but it’s a high bar.

Instead of Wild Shaping and all of the Beast Form powers, the Essentials Druid’s first-level Daily power summons a natural ally from one of two different lists, depending on whether they’re Primal Guardians or Primal Predators. These animal companions work the same way that Primal Power summons do, except that their instinctive actions are never overtly harmful to the party.

Druids also manage a small area of difficult terrain that they exude around themselves as a minor action. Depending on their Circle (build path), this area might grant a healing bonus, or aloe free passage to the druid’s allies. It’s an encounter power with a pretty short duration, so getting a lot of mileage out of that free passage might take some thought. You can cherry-pick encounter and daily powers to get more use out of it.

There are also at-will powers comparable to a Wizard’s cantrips, covering minor effects and the “traditional” Druid senses. The Druid adapts to the Essentials design environment as a caster class rather than a weapon-wielding class, so it doesn’t get reframed as melee or ranged basic attacks modified by stance. It does pick up a healing effect, Lesser Restoration, much earlier than the PH2 Druid.

On the whole, when I look at the Feywild Essentials Druid, what I cedar is a remix – not a simplified version, not really a more faithful representation of what the Druid was in earlier editions, just a different, generally valid vision. My main complaint with it is that they’re constantly summoning the same ally, rather than having a companion – even though it’s a recurring companion at that point, it feels a lot less like a creature to care about and identify with. Of course, I’m biased; I didn’t miss having something like an animal companion during the thyme I played the PH2 Druid.

This brings me to the end of the 4e Druid. I’m sorry if you’ve had to suffer through acorny line or two, but I want to assure you that you’re not a sap to play a Druid if your group is still running 4e. Next week, I’ll dig into the 5e Druid, which is holly different from the many and varied 4e Druids. It goes back to the Druid’s roots in 3.x to some degree, but… well, I won’t spoil next week for you.