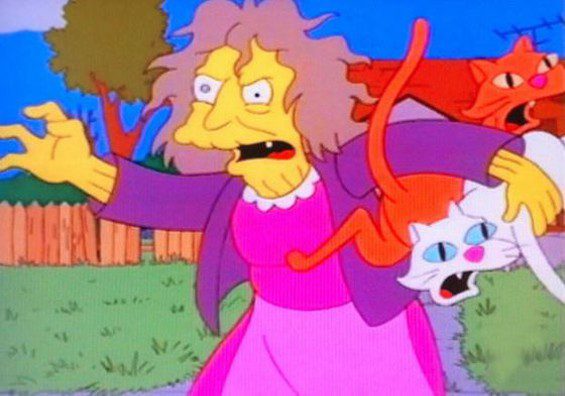 On my interview with the DM’s Block Podcast, near the end we presented the concept of a ‘crazy cat lady’ whose cats were actually dangerous beasts. I wanted to sketch out the concept with a little more detail for this week’s ‘System Agnostic’ post.

Felina Thurst aka The Cat Lady

Felina Thurst, aka the cat lady is a woman who looks to be in her late forties. While she may once have been beautiful, her hair and appearance is now unkempt and harried. There’s a certain greasy oiliness to her demeanor. When first encountered, she gives little indication that she is anything more than a mentally ill old woman, holding or having numerous mundane cats in her company. Only later, after one of her ‘babies’ has been hurt or she is otherwise provoked will she reveal her ‘big babies’ – a murderous pride of predatory cats with innumerable natures who are utterly loyal to the cat lady and wholly predatory to anyone and everything else.

Whether through mutation, magic, or psychic ability the crazy cat lady has a connection with a number of her ‘babies’ – cats all. These cats can range greatly depending on your setting and genre, from tigers and mutant lions to displacer beasts and dire-cougars. She can see through her cat’s eyes and feel what they experience. She can also direct them mentally, although her deranged nature in addition to the lack of her tactical acumen.

If Felina is killed or critically injured, all her babies will enter into a rage state that makes them even more dangerous.

The party is hired by the crazy cat lady to locate one of her ‘babies’ a beautiful feline with brown fur. Forced to kill the murderous beast when they finally encounter it.

The party is hired by a local magistrate to evict the cat lady for failing to pay her taxes.

The party has encountered several predatory cats in their travels which they have had to kill in order to protect themselves. Eventually, they encounter Felina, hunting them down as revenge for their transgression.

Reader Challenge! In the comments, suggest the specific ‘babies’ for Felina to have a connection to in your setting/system whether it’s shadow run, D&D, Pathfinder, or Savage Worlds (bonus points for also providing the appropriate CR). Ready… go!