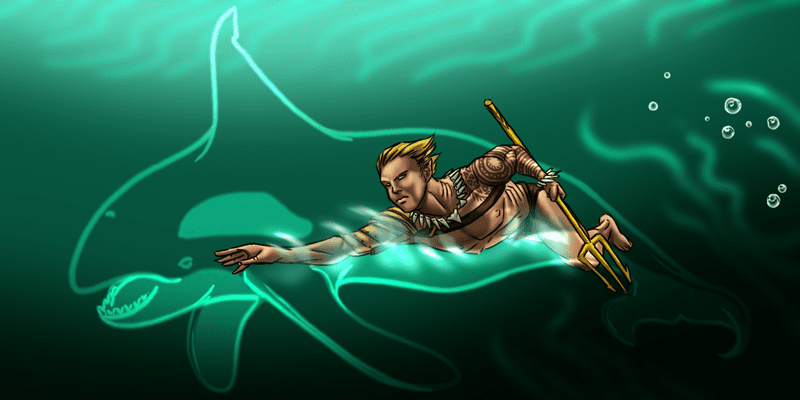 These two Totem Warrior barbarian builds showcase how you can mix-and-match the standard powers in the core rules, re-skin their special effects, and add a few new powers to create the feel you want for your campaign or specific PC. For example, the shark totem’s ability to shrug off damage is the same as the bear totem from the Player’s Handbook, but the orca totem’s echolocation powers are new.

The barbarian aquatic totem warrior first appeared at www.gameschangelives.com and has playtest-inspired updates.

Barbarians from coastal and island cultures often draw on the spirit of the ocean’s greatest hunters to inspire them in battle. Barbarians who choose an aquatic hunter as their spirit animal take the aquatic hunter class feature in place of the spirit seeker feature. Aquatic totems include killer whales (orcas) and sharks. As with the standard barbarian build, an aquatic barbarian may select from different animal totems at 3rd, 6th and 14th levels.

Path of the Totem Warrior

Aquatic Hunter
You seek a connection to the greatest hunters in the world, above or below the waves. At 3rd level when you adopt this path, you gain the ability to cast water breathing on yourself at-will, and speak with animals as a ritual. If your race is already able to breath water, you may instead cast beast sense as a ritual.

Totem Spirit
At 3rd level, when you adopt this path and choose either orca or shark as your totem, you may channel the power of your totem to gain additional powers, you must make or acquire a physical totem object–an amulet or similar adornment–that incorporates the teeth, skin, or jaw of the animal. You may also gain minor physical attributes that are reminiscent of your totem spirit. For example, you may have dark eyes, a vicious smile, lack of hair, or sharpened teeth.

Orca. Orcas travel and hunt in packs, learning to work together to defeat their prey. While you’re raging, your friends have advantage on melee attack rolls against any creatures within 5 feet of you that is hostile to you.
Shark. The spirit of the shark allows you to shake off all but the most brutal damage while the scent of blood is in your nose. While raging, you have resistance to all damage except psychic damage.

Aspect of the Beast
At 6th level, you gain a magical benefit based on the totem animal of your choice. You can choose the same animal you selected previously or a different one.

Orca. While manifesting your totem spirit, your physiology changes to adapt to your environment. While raging, you gain blindsight to a range of 15 feet in air, or 60 feet underwater. You can’t use this ability while deafened.
Shark. You manifest the spirit of the ocean’s most feared predator, with senses and instincts designed to stalk prey from huge distances. You can track creatures while traveling at a fast pace, and you can move stealthily while traveling at a normal pace.

Oceanic Blessing
At 10th level, you may cast the water breathing spell as a ritual. If you are in an aquatic campaign with races that can normally breath water, you may instead cast commune with nature as a ritual. When you do so, a spiritual version of one of the animals you chose for Totem Spirit or Aspect of the Beast appears to you to convey the information you seek.

Totemic Attunement
At 14th level, you gain a magical benefit based on the totem animal of your choice. You can choose the same animal you selected previously or a different one.

Orca. You learn to use your size and speed to your advantage in combat. While you are raging, you can use a bonus action on your turn to knock a Large or smaller creature prone when you hit it with a melee weapon attack.
Shark. Your emotionless ferocity is more terrifying than any wild rage. While you’re raging, any creature within 5 feet of you that’s hostile to you has disadvantage on attack rolls against targets other than you or another character with this feature. An enemy is immune to this effect if it can’t see or hear you or if it can’t be frightened.

Design Notes: The original build had hunter’s mark as a 3rd level option. After getting the game on the table for months now, it is clear that 1) hunter’s mark is an extremely powerful spell, and 2) it is one of the few spells available to rangers that compensate for what they’re seriously lacking in their core build. Instead, if your race can already breath water, you gain the same benefits as a surface barbarian.

Some additional flavor text was added to some of the totem powers.

This build was one of my first at www.gameschangelives.com and at the time there weren’t enough builds to easily run an aquatic campaign. That’s now changed so a non-water breathing option was added to the 10th level Oceanic Blessing for parties composed of the various aquatic races I’ve created.

The echolocation power of 6th level orca totems was altered to parallel the other echolocation builds, like the Oath of the Waves paladin. The above-water range is 15 ft. with a below water range of 60 ft. This reflects the hydro-acoustic qualities of water, ie: sound travels 4 times faster and significantly father underwater than on the surface.

Experiment: How To Play D&D With Two ...