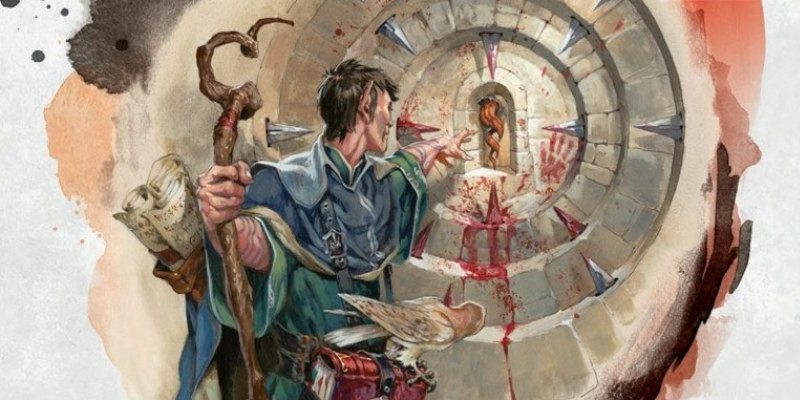 In my experience I’ve noticed that a lot of first time or novice GMs lean heavily on the combat side of most systems, but there is so much more.  Sure that plate armored fighter has faced off against a dragon, but what about quicksand.  Your wizard might fly right over pit traps, but heaven help him is he catches a cold.  Hazards can come in a lot of shapes and sizes each one just as harsh as the last.

First, I figured I would start by pointing out one of the most obvious uses of a hazards, “Difficult/Dangerous Terrain”.  I’m pretty sure these get more love than their siblings simply because of how easily they can just be added to a combat.  Fighting a group of kobolds? Why not make them worshipers of a black dragon and put pools of acid all around their lair.  Instant hazard to step everything up a notch.  Personally I try to use terrain based hazards as often as possible since I constantly worry my fights feel like they’re just taking place in a big empty room.  These are also one of the most friendly to new GMs as in reality the most basic form is just plotting out areas on your map that is anyone steps in they take damage.  The trick is to have the type of damage make sense for where the scene is.  Pools of acid should be acid damage, in a volcano you get fire, and so on.  The only real trick if you go the route of instant damage is to try and not let it be enough to instantly kill any of your players.  If a hazard  instantly kills every member of your group the moment they would enter it then it might as well be a bottomless pit without the advantage of seeing it as a pit before they walk in.

That brings me to the second thing to be mindful of instant damage based hazards.  Always make them an obvious threat.  If there are pools of acid that burn anyone that touches them no matter what make them glow green.  Fire and lava is another obvious solution.  If the players don’t get a change to avoid the damage once they are in it then they should have the chance to avoid the location instead.

Ok, so this one could be it’s own aspect of adventuring but for many reasons I say traps are just as much a hazard as anything else.  The primary reasoning behind it is simple.  Anyone who read the section above and though “why don’t they get a save?” will find their answers here.  There are three main mechanical aspects that differentiate a trap from just a pool of acid.

Yes poisons and diseases are different in the real world, but lets be frank.  Mechanically if you breath something in and an hour later you are vomiting that could be either an inhaled poison or you got sick.  I see disease as an inhaled (if just caught being around other sick characters, injected (if caught by a bit ore similar manor, or even consumed (food poisoning anyone?) poison.  The biggest difference is MOST poisons have a single and maybe a secondary effect and that’s it.  Getting sick on the other hand can last forever and takes time to get over.  That said some truly powerful poisons stick with you too lasting weeks or months.  In those cases again I don’t see much of a difference.  The only time it really matters is in how it might be treated.  Disease usually doesn’t go away from consuming an antitoxin (though depending on the sickness I think it should) and poison doesn’t leave your body if you just rest it off (unless it’s designed to do so).  Either way I would save these for once you get a bit of a handle on the other types of hazards and these are rough and can hit players out of no where.  I will also note that unless catching the disease or being poisoned is necessary to your story (something you should talk to you victim about before doing by the way) then these both always get a chance to save or resist.  We don’t all catch a cold when one guy near you has one, we just have a chance of catching it.  For poisons, it’s more of the fact that your players are probably mighty heroes and if a drop of liquid can take our every hero then that is either incredibly rare/powerful (see story reasons) or it just isn’t the case in a world of heroes.

Ok, so this one by itself isn’t a hazard, but depending on how it’s used functions basically the same way.  First of all exhaustion (most games already have a built in mechanic for it if you look) is a good way to have repercussions to many of your hazards other than just killing players (look at disease and poison extra heavy on this note).  Usually this means that while a character’s health might be at full they are not at full fighting strength and suffering for it.  Most common is that characters take penalties to whatever they do, but I’ve also see reduced speed and even carrying weight.  Now that is the result and while important when looking at hazards not one in and of itself, but there is another.  This is where you can just have the wear and tear of adventuring be a hazard in itself.  Maybe characters start running out of food and have to ration to just enough to survive or just walking with all that gear hours on end.  these can all cause exhaustion and thus start setting characters back.  Sure it’s no pool of skin melting acid, but when entering a fight a hero that hasn’t eaten in a few days will be wishing he had.

There’s plenty more that can be said about hazards and hell I could give all kinds of examples, but honestly damage dice change from system to system and alternatively I think there’s some gold already burred in here to mine in you’re stuck on ideas.  The biggest thing to remember is that there are lots of other ways to challenge your players than just swords and arrows.

Bobby Evans
I started with D&D now I’m a true addict trying anything I can get my hands on.  Check out game reviews, more GM tips, and some spins on D&D and Savage Worlds at my blog The GMs Table
Tagsdiseasehazardstraps
Previous Article