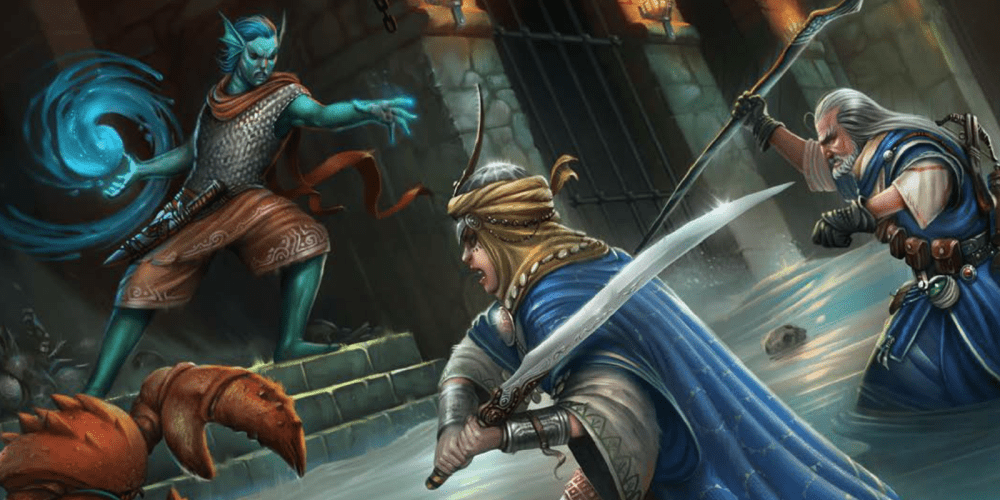 Below you will find some of my conversions for Level 5, “The Drowned Level”. You will not find detailed information on the Emerald Spire. If you aren’t running “The Emerald Spire”, you may still find these new monsters helpful for your home campaign.

There are many unique creatures in this level that can be duplicated using the stats of existing 5th edition creatures with few, if any, alterations.

Small/Medium Water Elementals: Substitute the standard Large water elemental for all elementals on this level. Remember, I had my PCs start the 1st encounter at 3rd level so they should be around 7th now.

Giant Moray Eel: The statistics for the Giant Constrictor Snake (MM pg 324) should work well for the giant moray. You may want to include 2 of these monsters as they are only CR 2 beasts.

Bunyip: In place of the bunyip I used a creature inspired by Tribality founder, Shawn Ellsworth, during his recent guest interview on the Dungeon Master’s Block podcast—an aquatic, crab-shelled umberhulk (MM pg 292).

Substitute a 30’ swim speed and the amphibious quality for the standard umberhulk’s burrow speed and tunneler abilities. Also, make sure to describe the beast instead of naming it. Even old school players may not recognize the creature if you don’t call it an “aquatic umberhulk” from the start.

Shark-Tailed Automaton: Use the stats for the automaton on level 3, but grant it a 30’ swim speed.

Mudlord: The mudlord in this module is the result of the Spire’s bizarre magic infusing the decayed remains of four derro with sludge created by pure elemental water. The standard mudlord isn’t that interesting to me so I used the stats for a black pudding (MM pg 241) with the following alterations (CR 5, 1,800xp):

Large elemental undead
AC: 14 (natural)
Speed: 30’; climb 20’; swim 30’
Intelligence 10 (+0), Wisdom 14 (+2), Charisma 10 (+0)
Damage Resistances: bludgeoning and piercing from non-magical weapons
Damage Immunities: acid, cold, lightning, necrotic, slashing
Condition Immunities: exhaustion, grappled, paralyzed, petrified, poisoned, prone, restrained, unconscious
Languages: Understands Common, Dwarven, and Undercommon. The creature can speak these languages as well, but understanding the slurred and twisted speech requires an Intelligence check with a DC 15. A PC with the Linguist feat gains advantage on this check.
Other: All other ability scores, qualities, and attacks remained the same, including its corrosive form, pseodopod, and splitting ability, though the last is restricted to 4 forms (there were 4 derro spirits infused into the creature). Should the PCs leave the creature behind, any splits that resulted from the combat reform into a single creature within an hour.

Spellcasting. The undine researcher is a 7th level caster. His spell casting ability is Charisma. He has the following spells prepared:

Multiattack. When the researcher casts ray of frost or shocking grasp he may also make an attack with his kraken’s beak.

The undine researcher will use his first round to summon 4 crocodiles (CR 1/2, PHB pg 305/MM pg 320) using conjure woodland animals and order them to aid his giant crab eidolon in attacking the party. On his second round he will cast hypnotic pattern and order his creatures not to attack anyone charmed by the spell. On his third round he will use conjure minor elemental to summon 8 steam mephitis (CR 1/4, MM pg 217) using his summoner quality to maintain the concentration on both conjure spells. On his fourth round he will cast mirror image, then use his damaging spells to assist his summoned creatures.

There are three undine researchers on this level, a mix of male and female siblings. You can use the previous stat-block for all three researchers, but to prevent the encounters from feeling repetitive you can change each creature’s tactics and equipment to make things more interesting.

You can easily vary the researcher’s kraken’s beak shortswords to better fit your players. Options include substituting a +1 bonus to attack and damage rolls or the vicious quality for the fey bane quality. You can also give each weapon a minor property and quirk from the tables in the DMG (pg 143).  I highly recommend the last option for all three weapons, perhaps developing a similar sibling rivalry between the weapons as there was between their original owners.

Amphibious. The fiendish crab can breath both air and water
_______

Multiattack. The fiendish crab makes two attacks with its claws.

Claw. +6 to hit, reach 5’, one target, 1d6+3 (7) bludgeoning damage plus 1d8 (5) necrotic damage, and the target is grappled (DC 16 Athletics or Acrobatics to escape). Each claw may grapple one target. If a creature is grappled at the beginning of the crab’s turn, the target takes claw damage automatically in place of one of the crab’s attacks. If the crab has someone grappled when used to deliver a shocking grasp, the spell hits the grappled target automatically.

The swarm of crabs in the original module is a CR 4 monster intended to fight level 5 PCs. Since my PCs were level 7 coming into this level, I used two of these swarms and was prepared to add a swarm to any combat that didn’t have enough drama.

Amphibious. The crab swarm can breath both air and water

Swarm. The swarm fills a 10 foot by 10 foot square, can occupy another creature’s space and vice versa, and the swarm can move through any opening large enough for a Tiny beast. The swarm can’t regain hit points or gain temporary hit points.

Claws. +5 to hit, reach 0 feet, all targets in the swarm’s space, 10 (4d4) slashing damage and the targets must make a DC 10 Wisdom save. On a failed save, attacks made on the target(s) by creatures other than the swarm are made at advantage until the beginning of the swarm’s next turn.