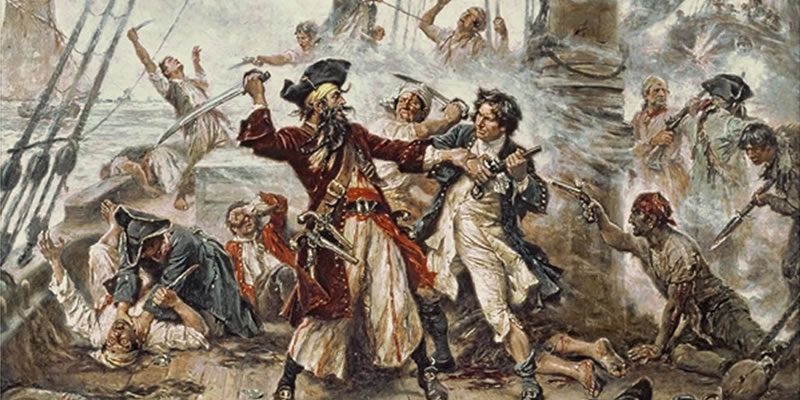 Here is another guest posting by Mark S. Cookman for our Nautical Nonsense column.

In the first part of this series, I looked at Officer Roles on a Pirate Ship. In this second part of a three part lesson dealing with the crew positions aboard a pirate vessel, we are going to look at the responsibilities of the Sail-master, the Carpenter, the Cook, the Surgeon, and the Master at Arms. These were all lower officer positions and were either voted upon or assigned by the captain as discussed in the first part of this lesson. The sailors who served in these positions were skilled laborers and, as such, their skills were always very much in demand on a ship. They were almost always offered a greater share of the treasure because of their skills. These were definitely crew members that a pirate ship could not function without.

The Carpenter was a skilled wood worker, often with some shipwright experience, who did all of the woodworking required by the crew. He was primarily responsible for repairing damage to the wooden portions of the ship and for plugging leaks that got too bad. (Ye should understand right now, before ye go to sea, that all ships leak, mates. It’s just when they really leak badly that you have to worry about it.) The Carpenter was also responsible for the construction of barrels and crates, as needed, to store cargo, as well as maintaining the tools of his trade. He took orders from and reported to the Boatswain.

The Cook was one of the most important of the lower officers. He was in charge of all matters relating to food on the ship. He made certain there was enough food, water, and rum on board for the planned cruise. He cooked the meals and suggested rationing when it was necessary. The Cook butchered the meat brought back by hunting parties and was the only man trusted to light a fire below decks. He maintained the necessary tools for both cooking and butchering. The Cook took orders from and reported to the Boatswain.

The Surgeon was likely one of the toughest men on the ship. He served as the barber/doctor/emergency surgeon for the entire crew. He was equally capable of shaving your beard and cutting off your damaged leg. The Surgeon dealt with not only the sick and the wounded, but also the dead. He, like the other lower officers, was responsible for maintaining the necessary tools of his trade. The Surgeon took his orders from and reported to the Quartermaster. It was rare for a ship to have a real doctor and it was common for the carpenter or the cook to fill this role as needed.

These 5 core positions represent the Non-Commissioned Officers of a pirate or privateer ship. These men all commanded other men on work details and so their words carried great sway with the crew. It was often from among these men that the next captain was chosen when a captain lost his position through a vote of no confidence. Thus, these were the men that the captain had to keep loyal to him to stay in command of the ship.

Clearly you can see how the Sail-master, the Carpenter, the Cook, the Surgeon, and the Master at Arms were all important roles on a privateer or pirate ship, as well as positions that commanded respect from the crew when performed well by those who held them. Hopefully this information will help to enrich your game-play when playing or encountering pirate and privateer crews. Next time we’ll look at what makes up the majority of the crew – Brutes, Gunners, Musikers, and Swabbies.