Officer Roles on a Pirate Ship 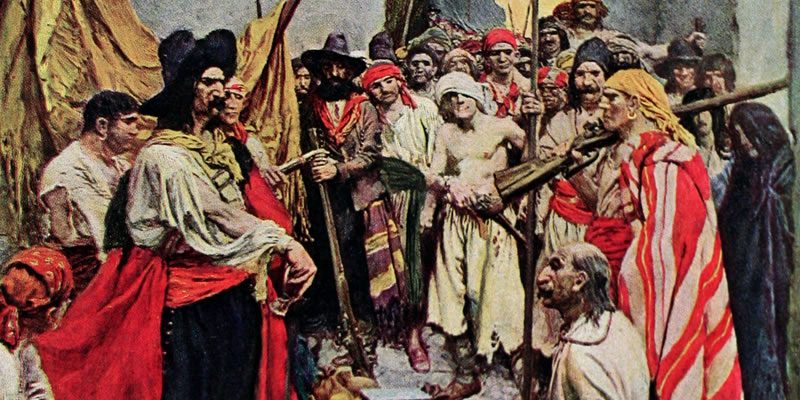 Here is another guest posting by Mark S. Cookman for our Nautical Nonsense column.

If you are running a game with pirates in it, then you should know what the job entails. It’s not all boarding ships, counting booty, and drinking rum like you might think. A great deal of hard work is required to run a sailing ship with a law-abiding crew, let alone one populated by pirates. In this essay we are going to examine the five principle officers on board a pirate ship, their duties, and their responsibilities. This is part one of a three part lesson. In the next lesson we will examine the duties and responsibilities of other officers and crew members with special duties. In the final lesson, we will look at one very special group of crew members that are almost always overlooked. Read on to learn what pirates expected of their primary officers.

The principal officers of a pirate ship were the captain, the quartermaster, the pilot, the boatswain, and the master gunner. On some ships these positions were all elected by an equal vote of the crew and on others the captain picked the crew members he wanted to serve in the positions. The captain on a pirate vessel was almost always elected by an equal vote of the crew. On a privateer vessel this was not very often the case. Privateer captains were often the owners of the ship or were given commission by their monarch to take a vessel to sea. So it follows with the other officers. If the captain was elected, then generally all of the officers were elected. If the captain was appointed or held his position by means of ownership, then generally he picked the officers. In either case, an officer on a pirate ship served at the whim of the crew. Even a man picked by the captain would be booted down to a simple crewman if he could not do his job. For the most part though, a person elevated to serve as one of the principle officers did so for life. The title of this article refers to the fact that most often the authorities that captured, tried, and hung pirates concentrated on the five principle officers of the ship. These officers were generally the most intelligent and skilled crewmen on board the pirate vessel. They were people that everyone else on board the ship admired for their ability to do their job. Diligent action is the mother of respect on board a ship.

The captain, however he came to his position, was chosen for his leadership, bravery, and cunning. The captain was responsible for the ship and everything aboard her; every item and every man. He was responsible for the overall decisions affecting the ship and her crew. The captain decided where to sail and what to attack. He was the voice of his crew to all beyond the ship. He often led his crew in battle. In terms of daily duties, the captain kept a log of the voyage, managed the affairs of the ship through the officers, and generally served a four to six hour shift at the helm. The captain stayed in power by being successful. As long as there are prizes to plunder, rum to drink, and food to eat, the captain will not be voted out or mutinied against. It is when things get lean that the captain must worry about crew voting him unfit for command.

The quartermaster (or first mate on a privateer vessel) was the number two man on the ship. He was responsible for enforcing the ship’s articles and administering punishment when necessary. The quartermaster was the trustee of the ship and her crew. He directly represented the crew to the captain. It was his responsibility to serve as a counterbalance to the captain in decisions that might be hazardous to the ship or the crew. A wise captain made no decisions that his first mate didn’t support. The quartermaster took responsibility for prize vessels and picked the treasure that the crew would take from a prize. He was also responsible for counting the booty and splitting the shares. Each day would find him working with his subordinate officers the boatswain, the master gunner, and the master at arms to effectively run the ship. The first mate also served a turn at the helm, generally a four to six hour shift.

The pilot was the number three man on the ship and often the most educated. He served as the ship’s navigator and was generally the best all around sailor aboard the ship. He was responsible for plotting the ship’s course and maintaining that course. The pilot maintained all of the ship’s charts and maps as well as the tools of navigation. He was charged with keeping a daily log of every event relating to the sailing of the ship. He recorded the depth, the currents, the wind patterns, the ship’s location, the locations of reefs and sandbars, and the state of the rigging. He reported directly to the captain. The pilot oversaw the work of the sail-master and almost always had at least one assistant (a pilot’s mate) to help him with his duties. The pilot and his mate both served separate shifts at the helm in addition to taking readings from the moon and stars to plot and maintain the course.

The boatswain was the number four man on the ship and often the most feared by the crew. He was in charge of the provisions for the ship. He maintained the stores of food, water, rum, gunpowder, shot, sails, rope, wood, and tar required to keep the ship and crew fit for action. The boatswain also directed the loading of cargo into the hold to maintain the proper ballast to ensure level sailing. He was in charge of keeping the watches on the ship and maintaining discipline among the deck crew. He was responsible for the ship’s longboats and for picking a crew to man the sweeps when the longboats were used. The boatswain was charged with maintaining the ship’s seaworthy status. He oversaw the duties of both the carpenter and the cook. The boatswain generally had a mate to help him with his responsibilities. In general, his duties were to make certain that all the work of running the ship was done. He reported to the quartermaster. The Boatswain was often the most feared man on the ship because his obligations often made him uncompromising. It was his responsibility to keep everything “ship-shape”. Leniency was something the quartermaster might give to the crew, but it was not something the boatswain was in the position to give. Day and night, the boatswain would drive the crew to do whatever work was required. He maintained the watch log and reported any problems to the quartermaster.

The master gunner was the number five man on the ship. He was responsible for the care and cleaning of all firearms, culverin (deck guns), and cannons on board the ship. He was also responsible for training the crew in the use of both firearms and ship’s weaponry. The master gunner picked and ran the gunnery crew. He reported to the quartermaster, but was responsible to the entire ship to make certain that the cannons hit the declared target. He was also responsible for maintaining the inventory of powder and shot for all of the guns on the ship. The master gunner was the only crew member besides the captain and the quartermaster entrusted to carry a key to the ship’s powder magazine. Additionally, the master gunner often led or picked hunting parties when they were called for. His day to day duties mainly consisted of drilling the gunnery crew and maintaining the guns.

Now you know the five chief officers on board a pirate ship, as well as their duties and responsibilities. In the next piece we will examine the duties and responsibilities of the sail-master, the master at arms, the carpenter, the surgeon, and the cook. Until then, keep your mind on your work and be diligent in your duties, otherwise the boatswain is likely to crack you on the head.

Should Roleplaying Be Taught in Schools?