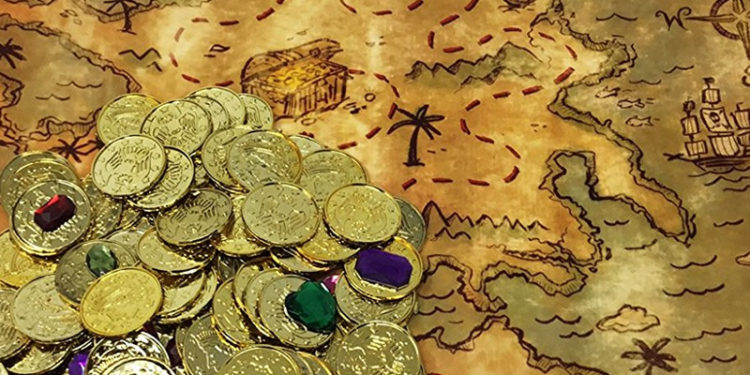 The Island with No Name is a starter adventure for four first level characters. The adventure is set in my Seas of Vodari campaign world, but can be easily adapted to any setting. The adventure is highly inspired by Treasure Island and other classic treasure hunts, but provides enough of its own take on this classic story to be both familiar and new.

In this adventure, players follow a map to a mysterious island in search of the hidden treasure of Captain Blackheart. Along the way, players will be challenged by rival treasure hunters, rough seas, dangerous monsters, skeleton pirates, a trap-filled temple, and a final showdown with a skeleton pirate captain. As an introductory adventure, the goal is to get the players a little experience with all three pillars of gameplay (exploration, social interaction, and combat).

The following is part 2 of a 3-part series that provides an entire starter adventure for DMs looking to run a treasure hunt. Part 2 takes the adventurers across the sea to the Island with No Name to search for the Temple of Morto. This portion of the adventure focuses on exploration and combat.

If Mags knows about the treasure and/or the ambush by Taggart’s crew, she will be in a hurry to leave port and set out for the Island with No Name.

Have your players name the ship or go with The Albatross. Either way, Captain Magnolia (Mags) Montrésor’s ship is a 50’ sloop (or typical looking sailboat) with a single mast. It is known for being fast and agile. The sloop carries two triangular sails: a mainsail on a boom aft of the mast and loose-footed head-sail (jib) forward of the mast. On her lower deck, the Albatross has six guns, three on each side.

Armor Class 16
Hit Points 50
Move up to the speed of its sails, with one 90-degree turn. If the helm is destroyed, the ship can’t turn.

On its turn, the sloop can move using its helm. It can also fire its cannons. If it has half its crew or fewer, it moves at half speed and can fire only half of its cannons.

If any of your characters have proficiency with Vehicle (Water), Cartography, or Navigator’s Tools you could make them an officer of the ship such as a Pilot, Navigator, First Mate/Quartermaster. Consider assigning Ship’s Surgeon to your cleric or anyone proficient in medicine. Other roles such as Mate, Cook, Deck Swab, Chief Gunner, etc can be created to match up with backgrounds.

I thought adding some NPC crew members would be a good idea to help with the sailing and to provide some NPCs to interact with over the trip to the island.

Captain Lady Magnolia (Mags) Montrésor. Tough and sly, willing to do whatever it takes to get the treasure. Mags is a spy with the following substitutions:

Crackers.  Mags’ pet parrot named crackers. Use the stats for a hawk, but allow crackers to deliver a few words (or even mock the PCs if you think it will work).

Chadwick Van Roos. This male human bandit is a capable sailor and can help fill out the crew if your PCs aren’t sailors. Add proficiency in Vehicles (water).

Arara Gemflower. Quiet female elf scout who is happier on lookout than talking with her crewmates.

Cade Reedfellow.  Quick talking male halfling bandit who is never far from the side of his best friend Thokk.

Thokk. Strong and dim-witted half-orc thug who is happy to let Cade do the thinking stuff. Add proficiency in Athletics and replace the mace with a great club.

The Albatross did not slip away as quietly as hoped, and the Salty Serpent is in pursuit with Captain Taggart at the helm.

The adventure really gets started once the characters have been sailing for almost two days and are within a few miles of the island. Regardless of where Taggart and his crew are, keeping track of them will be impossible with the storm.

The skies are clear and sunny, the seas are light, and you have enough wind to make your destination which appears on the horizon. As you close in on the island, a large dark wall of clouds rises from the sea, with lightning flashing from inside. The wall of wind and rain hits you like a giant fist.

Run a short skill challenge to see how your players handle the storm. A skill challenge is similar to asking for a skill check, but due to the difficulty of the challenge facing the entire group it is treated as an encounter, with each player being asked how they will try to keep the ship and crew alive in the deadly storm. It is easiest to ask a player what they would like to do and then assign a skill for them.

Instead of looking for a number of passes and fails, I would just hit the players with one of the penalties from the table below when they roll below a DC13. Run the PCs through two rounds of checks. If players want to use a spell, have them roll a DC13 Arcana check when using a relevant cantrip or provide an automatic success if they use a levelled spell and consume a spell slot. If you want to have a little fun, have Crackers taunt any players who roll a 1 (or fail by more than 10) on a check.

The swollen seas and hurricane-like weather disappears as fast as it arrived. It’s a sunny day without a cloud in the sky.  Your ship is beached on a long, sandy stretch beach and is quite damaged. Around two hundred feet from the water, thick jungle rises. The beach itself is covered in seaweed, driftwood and other materials that have washed up from the storm. Sand is broken up by clusters of jagged, rocky outcroppings.

Ask the PCs what they would like to do. If they don’t have any ideas, Mags will quickly start barking out orders based on the list below.

After a few skill checks, interrupt the PCs’ exploration with a huge crab (stats below) attack. If they were unable to make a perception check of DC15, have the monstrous crab surprise the PCs.

Amphibious. The crab can breathe air and water.
Powerful Build. The crab counts as one size larger when determining its carrying capacity and the weight it can push, drag, or lift.

If the PCs are unable to defeat the crab, remind them that running away from the crab might work. If the PCs run away, the crab will not pursue them and return to its hidden burrow under the sand. If the characters are beaten up, ask them if they would like to take a short rest. If so, Mags gives everyone a chance to recover.

An hour later, ask the PCs what they would like to do. If they don’t have any idea, have Mags order them into the jungle to look for the treasure while she leads the repair of the ship. If they failed to find the trail, have one of the NPC crew find the trail and point it out to the PCs. If the players don’t notice that the trail might be the one mentioned in the journal, have Mags point it out.

As you follow the path into the jungle, you leave the bright sun and the sound of the surf crashing on the beach. All around you is thick green jungle from the ground to the canopy high above. The leaves and vines above block the bright sun and only dim green light reaches the groud. The jungle is full of life, and the various sounds of birds and other animals is constant.

Depending on how rolled, they should be following a stream. As they progress along the stream to the temple, have them run into a little trouble along the way if they become lost or if a little action is needed.

Creatures in quicksand need to make a DC15 Strength (Athletics) check to move 5 feet (in any direction), failure results in sinking 5′ and beginning to drown. You may want to allow close fails of 4 or less to float where they are. A creature whose head falls beneath the surface of quicksand will need to succeed on a DC15 Strength (Athletics) check to get to closer to the surface or be rescued, otherwise see drowning rules.

DC 13 survival check to follow path to temple. If lost, roll on random table below for an encounter (or if you just want to throw a combat encounter at them).

Morto is a god of necromancy, so if you want to emphasize this, have the jungle growth turn black and withered as travel deeper into the jungle towards the temple.

As you follow the path deeper into the jungle, the thick green jungle starts to turn black and withered. The branches full of dead leaves and thick black vines above still block the bright sun, but the dim light that was green is now gray. Once full of the sounds of life, the jungle is now quiet and the air still.

If they players ask for a short or long rest, have them take the rest, but rest is uneasy and even filled with nightmares. At the end of the rest have a group of skeleton pirates (4 skeletons) encounter the treasure hunters. If they didn’t set up a watch or rolled below a DC13 Perception on their last watch, have the skeletons surprise the PCs.

In Part 3, the treasure hunters enter the temple and face off against Captain Blackheart.

Check Out My Pirate Adventurers PDF 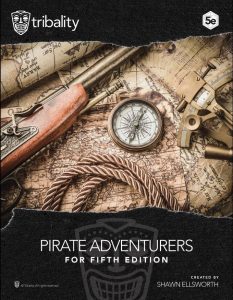 With PIRATE ADVENTURERS you can provide your players with new player character options for 5th edition to create pirate themed characters. These options can be used to play an entire campaign in a pirate setting, or just to provide a player with more pirate flavored options than provided by core 5th edition materials.

Allow your players to dive into custom backgrounds, equipment, feats and shipboard roles created just for their swashbuckling pirates and privateers.

Product Information
This product will allow you to provide your players with additional player character options and equipment for your pirate themed world: