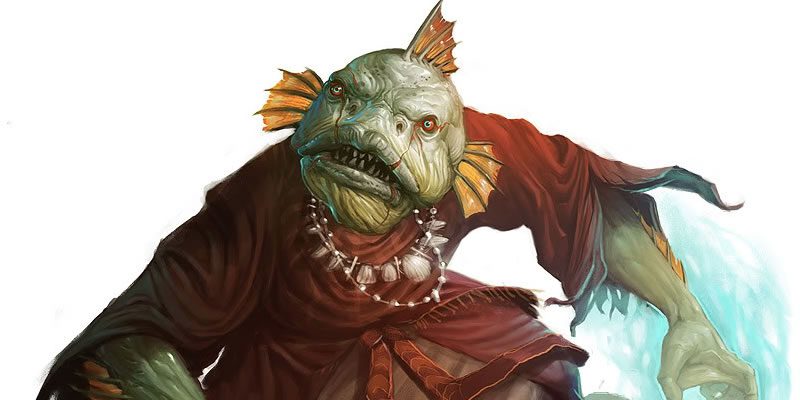 In this series I will be presenting creatures you can use for villains, lieutenants, minions, and wild encounters for 5th edition aquatic games. I will also be presenting encounter seeds for these villains at each tier. This week I bring you enemies and encounters for parties of 6th through 10th level characters.

Make sure to check out Shawn Ellsworth’s overview of 10 Awesome Monsters for Aquatic Encounters, as well as his articles for eight other terrains right here on Tribality.

Looking for encounter ideas for these creatures? Help yourself to half-a-dozen and let me know how your players enjoy them.

For the purposes of this series, villains are defined as individuals that act as either instigators of complex local, city-wide, or country-wide plots, or creatures that can act as the main antagonist for one or more adventures. I’ve typically limited Villains to creatures with a minimum of 10 Intelligence. This led me to some surprising discoveries. For example, I didn’t realize that several low-level undead creatures have impressive Intelligence scores, including banshees, ghosts, ghasts, revenants, wraiths, and even will-o’-wisps!

I’ve also included a few surface creatures that make excellent villains and can be easily adapted to an aquatic campaign (such as the mind flayers and yuan-ti), as well as one or more new villains for you to use against your party.

Bonus Villain: a new, CR 8 merrow: the hand of Demogorgon

Lieutenants act as the higher-level minions of villains. They are smart enough to instigate plots of their own, typically at the behest of their villainous masters. Alternately, lieutenants may act as Villains for the lowest level parties at each tier. For example, a young black dragon (CR 7) can act as a main villain for a party of 6th level PCs, as long as it has enough minions and an interesting enough lair to make the encounter enjoyable.

Bonus Lieutenant: you can find the CR 5 wereshark and CR 4 merrow hunter-seeker in the previous article of this series.

Minions are the lowest-tier servants of the villains and lieutenants, or beasts that can be used as wandering monsters, guards, or random encounters. Lieutenants (and even Villains) of lower-level parties can easily be the Minions of higher-level Villains. This category also includes creatures with Intelligence scores below 10, including beasts, constructs, plants, and undead that can be used to flesh out encounters.

Keep in mind that large numbers of lower CR creatures can also make for interesting encounters. For example, sharks make great encounters in small numbers, but some species of sharks, including the hammerhead (use stats for hunter shark) swim in shoals of hundreds and even thousands! Though a combat using 100 hunter sharks might appear tedious, it can be a terrifying experience and a challenge for any party. At 45 hit points and 13 damage per bite, even these CR 2 creatures can deal significant damage to 11th level or higher PCs, especially after a party member gets damaged and triggers the shark’s blood frenzy.

Since the Lieutenants (and even Villains) of lower-tiers can be used as Minions in higher-level encounters, there is plenty of material to use. I have, however, included one or more new creatures you can use against your players when inspiration has hit.

Bonus Minion: the Ulat-Kini (aka: Skum) are presented both as a monster and as a playable PC race.

In the accompanying article for each tier, I will provide general plot outlines and story seeds for you to use to create encounters for your aquatic games. I will include options for campaigns focused entirely on aquatic races as well as for surface campaigns looking to shake things up.

In addition to those listed below, you can use any of the minions/pets from the 1st-5th level Enemies list. For creatures with CR 1 or less, use the creatures in larger numbers, such as shoals of hunter sharks numbering in the dozens, or “swarms” of constrictor snakes.

Spellcasting. The naga is a lOth-level spellcaster. Its spellcasting ability is Wisdom (spell save DC 14, +6 to hit with spell attacks). It has the following cleric spells prepared:

Multiattack. The hand of Demogorgon makes two attacks: either any two melee weapon attacks, or one cantrip plus a melee weapon attack. Alternately, the hand may make a claw attack and either a vampiric touch or inflict wounds spell attack against the same target. All other spells require the hand’s action to cast.

Amphibious. The ulat-kini can breath both air and water.
Ancient Slaves. The mind of the ulat-kini is resistant to mind controlling abilities of all creatures except aboleth. They have immunity to the charmed and frightened conditions and proficiency with Wisdom saving throws, but loose these advantages when dealing with the spells and psionic powers of aboleth.
_______

“Ulat-kini (skum) are the most prolific and successful of the countless races created by the aboleths to serve as slaves. At the height of the aboleth empire, skum were legion and their armies waged many wars upon the land, yet now that the aboleths are in decline, skum have been set loose to manage on their own.

“For the most part, the skum have been less than successful at this endeavor, and today they exist in a shadow of their previous multitude, most of them dwelling deep underground in slowly crumbling ruins left standing only because their enemies have lost interest in pursuing the now-won war against these fish-like humanoids. Skum have even lost their own name—only the most erudite and wise of their kind remember that they were once known as the ulat-kini. Today, most identify themselves with the racial epithet applied to them by surface-dwellers—“skum.”

“Skum do not age, and barring death by violence or disease, they can live forever. Unfortunately, this near immortality is crippled by the fact that skum are incapable of reproducing among themselves, for all skum are male. The aboleths did not want their slave race to prosper without their permission. Yet terribly, this does not mean that skum cannot breed. Originally created from human stock, skum can impregnate humans, and the children issued from such unholy unions are invariably deformed. Those who are not born skum undergo gradual transformations throughout their lives, and when they would normally die of old age, such hybrids instead go through “the change,” shedding their wrinkled flesh and transforming into one of the ulat-kini. While most skum tribes lack the drive to perpetuate their race and would prefer to languish in their hideous sunken ruins, tribes settling offshore of remotely populated coastlines seem to be on the rise. Some such communities raid villages for breeding stock, but a few more insidious tribes form alliances with these desperate folk, providing protection and bounty from the sea in return for wives.”

Ability Score Increase. Your Constitution increases by 2, and Strength increases by 1. Your Charisma decreases by 2.
Age. Ulat-kini are immortal. You are immune to aging effects.
Alignment. As former slaves to the aboleth, the vast majority of ulat-kini are programed to be lawful evil. Player character ulat-kini separate from their tribes for many reasons, some of which may be the breakdown of their ancient aboleth programing. Ulat-kini PCs may be of any alignment.
Size. Ulat-kini are similar in size to humans, though they are muscular and hardy. Your size is medium.
Speed. Your base walking speed is 20 ft. You have a swim speed of 40 ft.
Former Slaves. Ulat-kini were created as a slave race to the aboleth, and therefor were granted some protection against the magic of their master’s enemies. You gain advantage on saves against charm and fear spells, and gain proficiency with one of the following saving throws: Intelligence, Wisdom, or Charisma. You make all saving throws against aboleth spells and psionic powers at disadvantage, including against charm and fear spells.
Bite. You may use your action to make a bite attack. Your bite deals 1d6 + Strength modifier piercing damage.
Naturally Deceptive. You gain proficiency in Deception and Stealth.
Amphibious. You can breath both air and water.
Languages. You speak, read and write Aboleth and Aquan, as well as one other language (typically Undercommon or Common)