Lord of the Deep: Dire Stomatopods for 5th edition 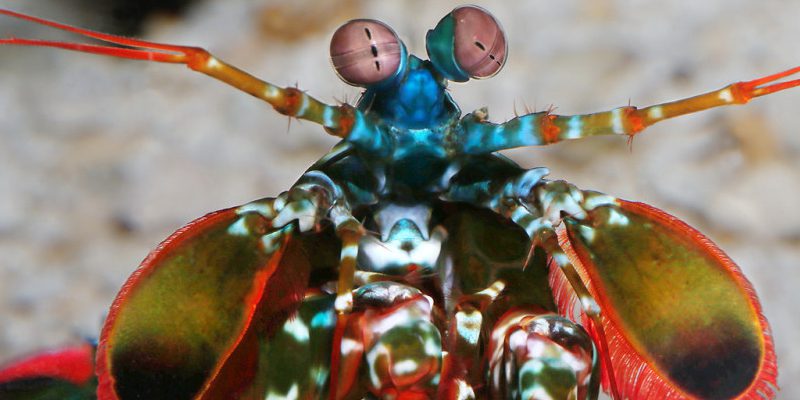 Life has been crazy over the past two weeks around the Howard household, so please excuse any delays in posting. I’ll be returning to the Enemies & Encounters series next week because I want to give it the time and detail it deserves. Until then, please enjoy one of my favorite real-world marine creatures monsterized for 5th edition. This one’s specifically for DM Mitch at the Dungeon Masters’ Block. Enjoy!

Amphibious. The dire stomatopod can breath both air and water.
Broad-spectrum, Multifocal Vision. The dire stomatopod possesses two eye stalks that allows it to track targets 360 degrees. In addition, each eye can focus on three different objects simultaneously. This unique vision grants the beast advantage on all Wisdom (Perception) checks involving sight, a +5 bonus to Passive Perception checks involving sight, and multiple attackers do not gain advantage on attack rolls against it. In addition, the dire stomatopod can see into both the infrared and ultraviolet spectrum, allowing it to see invisibility at all times.
_______

Multiattack. The dire stomatopod makes two attacks per round, only one of which can be a harpoon arm attack.
Lightning Reflexes. The dire stomatopod’s attacks are made at speeds so fast as to be invisible to the humanoid eye. Such speeds cavitate water and deliver shockwaves that can shatter armor. The dire stomatopod makes natural attacks with advantage against any target not under the effects of a haste spell, enhance ability (cat’s grace or owl’s wisdom), foresight or similar precognative, speed-boosting, or perception-boosting magic.

Magical armor provides the wearer with a +1 bonus to the saving throw, and an additional +1 per enhancement bonus. For example, +1 chainmail would grant the wearer a +2 bonus to the saving throw, while mariner’s armor would grant a +1. Repairing armor requires crafting checks determined by your DM. Natural armor is repaired at 1 point of AC per long rest or per spell level of cure wounds cast on the target, or automatically if the creature is targeted by a lesser restoration, greater restoration, regenerate, or heal spell.

Harpoon arms. +7 to hit, reach 15 ft., one target, 15 (2d10+4) piercing damage and the target must succeed on a DC 15 Dexterity saving throw or become impaled. An impaled creature gains the restrained condition. A critical hit forces the target to make the Dexterity save at disadvantage. If an impaled creature is Large or smaller, it must succeed on a Strength (Athletics) contest against the dire stomatopod or be pulled adjacent to the beast. The dire stomatopod may not make a harpoon attack as long as a target is impaled. The impaled creature, or any creature adjacent to them, may use an action to end the restrained condition. Doing so inflicts an additional 15 (2d10+4) piercing damage as the harpoon arm’s ragged hooks rip flesh as it is pulled free. This additional damage can be prevented with a successful DC 15 Wisdom (Medicine) check made after 1 minute of treatment. Impaled creatures may be attacked by the dire stomatopod using its club arm.

For more information on this fascinating creature, check out:

In the Eye of the Beholder: Treasure