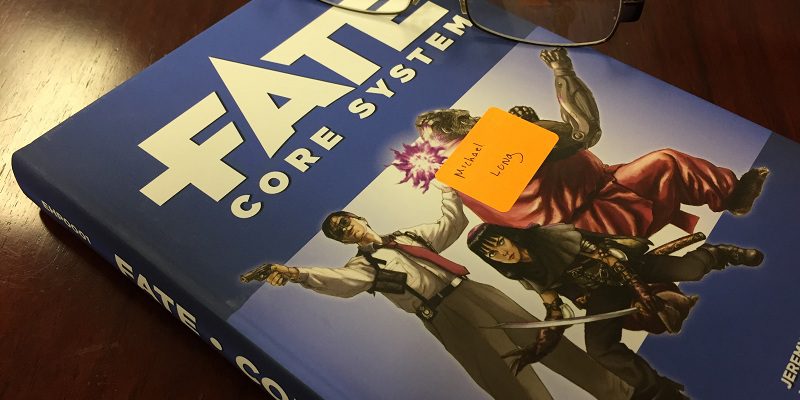 I’ve been meaning to read the FATE rules. I have all of the FATE in electronic format and purchased them through DriveThruRPG.com. I didn’t print them off, and they sit in my online library. I think I purchased them over a year ago (Yeah, my order says 02/22/2014). I would look through them a little bit, and I’ve always wanted to sit down and play, and I’ve heard a lot great things about the game, and… but it takes some commitment to learn some new rules and method of play. I put it on my to-do list.

That was last year.

Recently, I’ve been talking to Shawn about FATE, and how we might run a game for the group as a one-shot.  And so last week I stopped by my local game store and bought some dice, and looked for the book.  They didn’t have one and told me they’re sold out. I went ahead and ordered the FATE Core book from them. I know had the PDF, but I wanted a book to have handy.

So, this week I stopped by to check to see if it was there.  I was surprised to see that it was ready to pick- up, and even had my name on a little sticky.  I looked around the store one last time, did I need anything else? I noticed a table that was getting ready to start a game.  Normally on that night, they are usually playing D&D, but everyone had the little blue book I just bought. What a strange and awesome coincidence.  So I sat down to observe, and they let me know they were doing a one shot FATE game for a few weeks. I didn’t have any dice, pencil or even a piece of paper. Just my new book.

I decided to stay a while longer, and I asked if I could setup a character.  They gave me a character sheet, and so I started to think.  There weren’t any character classes, or restrictions, or rolling of dice.  I was just given a general world setting, the generic list of skills, and could choose whatever I could imagine.  There is a lot of freedom in that, and can be a daunting task for a first time player.  So I stared at a blank character sheet and listened to what other players were creating, and tried to think of something that was different. I just had to start with a general idea of my character, and then start filling in the details with ranking of skills that I felt would be stronger or weaker for that character. I think I did okay.

And then we started to play. It was a really fun game. Very quick, easy, and involved group storytelling. I had a lot of great rolls and I am so glad that I walked into that game. I don’t think it will change my love of other games, but it has opened a door to another game that I am going to keep playing. If you haven’t had a chance, play a game of FATE and let me know what you think.

You can get FATE RPG at the Evilhat website, or through DriveThruRPG website in PDF, ePub, and Kindle formats. Here are the links:

Great graphic about the Spheres of FATE : 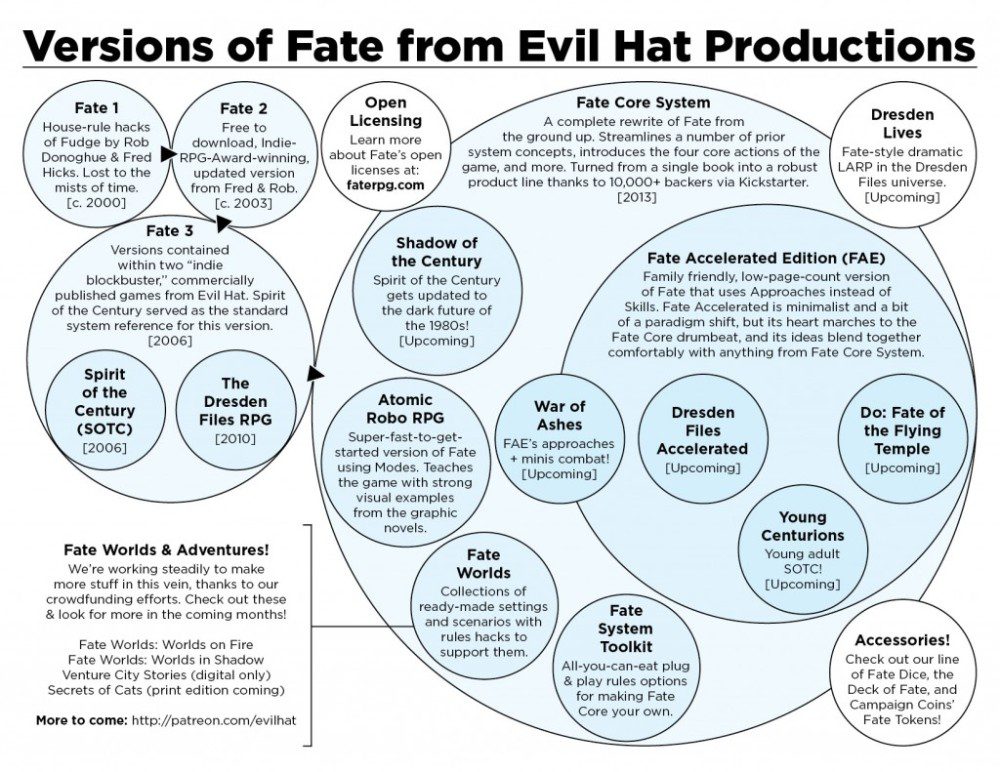