War of Ashes – Fate of Agaptus

A new FATE RPG from Evil Hat is here. The hardcover book will be available this September, and you can preorder the book now and receive the pdf. Here is the game description from the website: 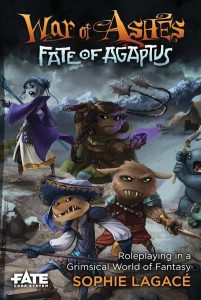 Welcome to the War of Ashes RPG: Fate of Agaptus! This “grimsical” minis-friendly tabletop RPG is based on the popular miniature game. Head off to adventure in a world where the inhabitants might look cute and cuddly but often carry pointy objects with which they might just decide to stab you. Play as a determined Elvorix, a vengeful Vidaar, a militaristic Jaarl, or a ravenous Kuld. Stage Romanic-style battles and then celebrate your victory with a pint of kogg.

Inside, you’ll find everything you need to get started, including:

I had the pleasure to review and play this game recently. I have to say, that the game has a lot of pros going for it. You get a detailed world description and the game blends a lot of modern FATE RPG concepts and also allows tactical game play with miniatures to be used. And that’s because War of Ashes started as a miniature strategy game War of Ashes: Shieldwall developed by Zombiesmith. Sophie Lagacé was able to work War of Ashes into a complete playable RPG.

The game was created using a modified Accelerated FATE rule set (a streamlined incarnation of the popular Fate Core System) along with allowing optional miniature strategy play. They’ve also added new equipment and created powerful  “artifacts of the Ancients!!”  There is ritual spellcasting, and they have also included step by step campaign creation in the world of Agaptus.

Magic has a special feel because of the world setting dealing with Deities.  Spell casting gives a player boons, but casting spells also comes with severe risks. Mainly the risk of gaining attention of trouble-making Gods. A trouble aspect can be invoked from the God’s aspect toward the player for every invocation gained from spell casting.

The Noble Elvorix – The Elvorix are a proud race, bordering on vain. They are hardy, warm-blooded, fur-bearing, bipedal, placental mammals; like their cousins the Vidaar. There are different sub-races, Atronians, Highborn, Northerners and Vorix. Agapta is the capital of the Elvorix Empire.

The Savage Vidaar – The Vidaar descended from the same original stock as the Elvorix but represent the most aggressive fraction of the population. The subraces of the Vidaar are the Ghos-Furs, Sea-leggers, Half-Breeds and Late-Comers. The captial city for the Vidaar is Vidaara.

The Disciplined Jaarl – The Jaarl (pronounced with a “y” as opposed to a hard “j”) are a different species, driven from their native land after it was destroyed in a cataclysmic volcanic eruption.

The Endless Kuld – All three races face the growing threat of the gluttonous Kuld, voracious creatures with insatiable appetites and very little discrimination between what does and doesn’t count as food.

There is a lot to like about the game, with a lot of rich details that allow for a hearty RPG game. I think a lot of FATE players will enjoy this one of a kind setting that has been created with War of Ashes. Here is the link to the game, and more game information:

Interested in picking up some minis for your game, or further exploring the world of War of Ashes? Head on over to Zombiesmith!