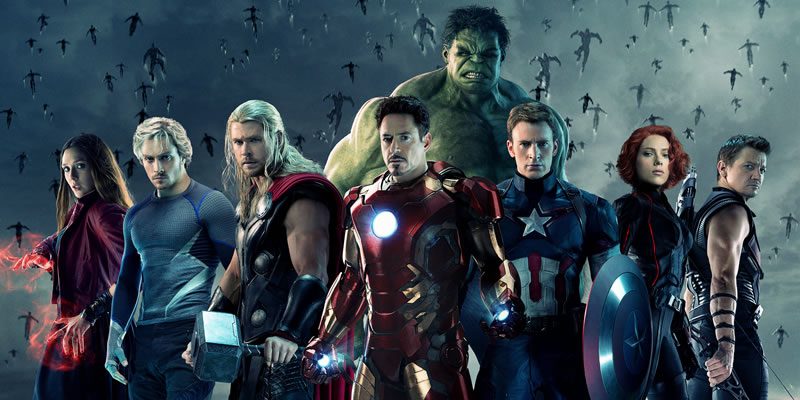 Worldwide, Avengers: Age of Ultron has earned $627 million in just 12 days. Whenever a superhero movie comes out I can’t help but think about how I would build the heroes and villains in Pathfinder, Dungeons & Dragons or FATE. Also, when I read the comic Marvel 1602 by Neil Gaiman, I became obsessed with running a one-shot with powerful Marvel heroes in a medieval or renaissance setting.

Creating builds of superheroes might be a useless exercise and is generally lazy character building (versus creating a original character), but I must do what I must.

Enjoy or hate… here it goes.

This Avenger is a little less mighty than the Asgardian god of thunder, but Thor still possesses the enchanted hammer Mjolnir (+3). While Thor is stuck on the ground, charging around with his magic hammer makes him a devastating melee combatant, especially when adding smites to his attacks. If you think a cleric might be a better way to go, check out my Thor 5e Cleric build.

To make things simple, Bruce Banner is a Commoner (Sage) with a 20 in Intelligence (or he could be a Wizard of some sort). The Hulk stats are below. I was going to give Hulk some levels in Monk, but it didn’t match his backstory. The Hulk is a human that turns into an angry raging monster (using Goliath for racial stats) that attacks with fists or anything he can grab (including grappled enemies). You’ll notice Hulk breaks the 20 max and has 22 Strength, 4 feats and no real magic items.

I looked at creating a Warforged Wizard or Artificer, but an Eldritch Knight who created his own magical armor and blasts stuff works for me. A medieval Anthony Stark would most likely be the son of a rich lord and perhaps trained like other nobles to be a knight. This martial training combined with his interest in the arcane (like his father) has created Tony’s Iron Man.

The First Avenger, Steve Rogers (and his magic shield) was enhanced by the Super Soldier Serum during World War II. A superior knowledge of tactics allows Cap and his allies to control the battlefield. Cap’s stats are really well rounded, but I’d like all of them to be higher. Especially his Intelligence, but I’m going to handle that as him being more practical than book smart.

Added (June 4, 2016): If you want Cap’s armor to match his look in the comic you can try out regular scale mail, which will work out to the same AC (thanks Trampas Whiteman for the idea).

Natasha Romanov is a powerful striker who combines ranged, melee and sneak attacks to defeat any enemies she faces. Natasha was trained from an early age in espionage and assassination. Her hand crossbows are enhanced and can sting her enemies while making ranged attacks and her superiority dice and sneak attack can be added to melee.

An orphan who ran away to the carnival, Clint Barton learned his expertise with the bow by performing trick-shots as Hawkeye “The World’s Greatest Marksman”.

Can’t get enough Avengers, try creating some of these other heroes and villains. Check out my Guardians of the Galaxy PCs or Fantastic Four NPCs.

Let us know what you think of the builds above and how you’d improve them in the comments below (and please link to your own superhero builds).

Check out some other articles for previous editions of D&D:

Weekend Shout Out: The Adventure a Week ...

A Week of Homecoming