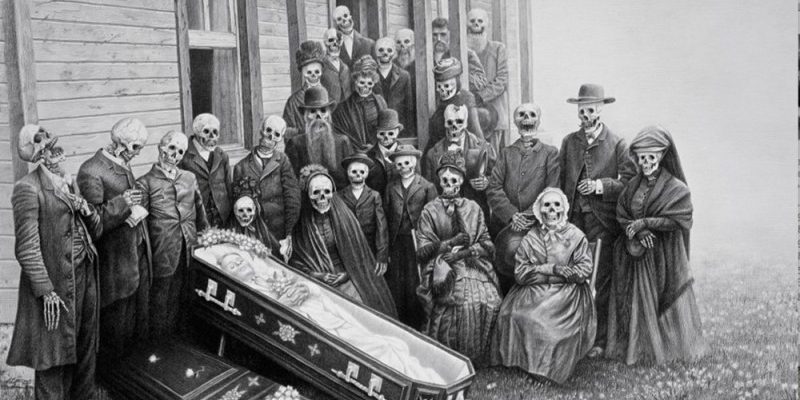 Death in D&D can range from the mundane to the downright strange. Maybe your character goes down to something as simple as a club to the head or maybe they get a sword in the guts. Or maybe they breathe their last staring down a deadly dungeon trap or a magnificent fireball spell. These are all pretty standard ways to go, and many of the characters I have played and died as, or have killed off as a DM, have been in these fashions. But these are just the tip of the iceberg when it comes to the hundreds of way to die in D&D.

Dying as a PC or killing one off as a DM should never be taken lightly. It might happen at random with a few bad rolls or it might happen unexpectedly due to a less than inspired decision, but no matter how it happens it should have some weight and bearing on the adventure or campaign. That being said, as the DM you might want to plan out a death in the party in advance. This can be a very constructive thing to do for several reasons: 1) it proves to the other characters that you mean business and they are not entirely safe; 2) the loss of a character may make the adventure or the campaign more difficult and challenging for the other players; 3) Perhaps the character that died was too over powered and a correction needed to be made; 4) the death might have been part of your storyline and needed to happen.

No matter what the reason, killing characters off can be challenge and it can be even harder to kill a character off in a memorable way or in a way that allows them to go out in blaze of glory. So, if some impressive character death is in your future, here are a few extraordinary and in some cases D&D specific ways to kill of that PC in grand fashion. Here they are in alphabetical order:

No, no, no, not the drug! Get your minds out of the gutter. I’m talking about the corrosive liquid or semi-liquid that will eat through your armor, your skin, your flesh, and still have room for dessert. Acid is just one of those ways to go that make people wince and with good reason. It’s the same reason why it was used in the Alien movies as well as Jurassic Park; acid is creepy. And it really doesn’t matter if the source is a trap, a pit, or if it comes from some sort of creature, it is scary all around. And here’s an extra added little tip, using acid is a great way for the DM to dispose of some magical weapons, armor, or items that you might not want your characters to have any longer.

“No Disintegrations!”…“As You Wish”. I think that it is really disappointing that we never got to see Boba Fett disintegrate anyone. However, in D&D, disintegration is the calling card of several powerful creatures, most notably the Beholder. Again, there is something a little unnerving about watching a character evaporate into nothingness in the blink of an eye; sort of reminiscent of those old nuclear bomb films. It is also a method to kill people that is almost impossible to come back from. Lots of healing spells and resurrection spells can help a PC recover from terrible injuries, but if disintegration takes you out, you are quite likely gone for good.

Now an argument can be made that a feebleminded character is not really dead, they are just a non-thinking zombie unable to comprehend even the most basic of concepts. But, in my opinion, unless the group can think of a way to reverse the effects of the spell or the DM bends the rules a bit and only makes it temporary, feeblemind equals character death. And in some cases, this might be the most humane way to end a character for a player. Your beloved Percival the Halfling Warlock is not dead, he’s just not adventurer material anymore. I know that’s kind of sad, but it also leaves the door open a tiny crack for a potential comeback someday.

I’m not talking about force fields or unbreakable magical bars; I’m talking about the kinds of magical entrapment that can shelve your character for hundreds if not thousands of years. The genie in the bottle or the lamp comes to mind, as does evil mages and demons capturing people and magically putting them into gems, containers, and other vessels. Now, again, this is not actually killing a character but it can effectively be a character death. It might also be fun to use this form of losing a character to drive the plot for the remainder of the adventure or campaign. Turn it into a “we have to get so-and-so back!” kind of quest.

And now we have the signature finishing move of medusas, basilisks, and the ever odd cockatrice; not to mention a sneaky trick of magic users. Petrification is the ultimate way for the egotistical character to go out because your glorious figure can be preserved for all time in perfect detail. By turning you, your equipment, and anything else you have on you at the time into instantaneous stone, Petrification is one of the best ways for a DM to take both a character and some items out of a fight. However, from my experience, Petrification is rarely permanent and therefore hardly ever leads to character death. Although, on those rare occasions where it is permanent, players and groups remember it well.

Now we’re getting into some Night of the Living Dead material as well as every other viral zombie show that has ever existed. Rot or Zombie Rot can affect players in one of two ways: 1) it can slowly kill your flesh causing you to lose arms, legs, and eventually more critical parts of your body until you can no longer function; or 2) it can slowly infect your mind eventually turning you into a zombie or undead creature yourself. Either way, when this infection reaches a critical point, it’s hasta la vista, baby. Also, I should mention that this disease is not just limited to Zombies. There are many different types of undead able and willing to pass on their infectious flesh rotting fun-time.

Let’s face it; death is pretty scary at the best of times. However, when death involves simply floating around in a black, soundless void until you pass out, it is the stuff of nightmares. It reminds me of all of those space movies where the astronaut gets unhooked from the ship or the station and is destined to simply float out into nothingness until either the oxygen runs out or the body just shuts down. In D&D, this form of death comes with a name: The Void. Now thankfully, this horrid place is hard to reach. As far as I know, only magic can get you there in the form of portals, forced teleportation, or ritual. And I should note that there are actually a few creatures and places that inhabit the void, but since it is so large and almost infinitely vast, coming across one before you perish is very unlikely.

Unlike the Genie in Aladdin, wish spells can kill people in D&D. Now it might be one of the cheapest and meaningless ways to go out in the history of the game, but that’s the way the cookie crumbles. Having an NPC or even the main baddie use a wish spell to end the life of a PC seems too easy, but with that being said, it would firmly place them in the category of “supremely evil” in my book and I would already be rolling my dice to get revenge for my fallen comrade.

Have you killed off a character or been killed off in a weird way? Please comment below!