In the Eye of the Beholder: Treasure 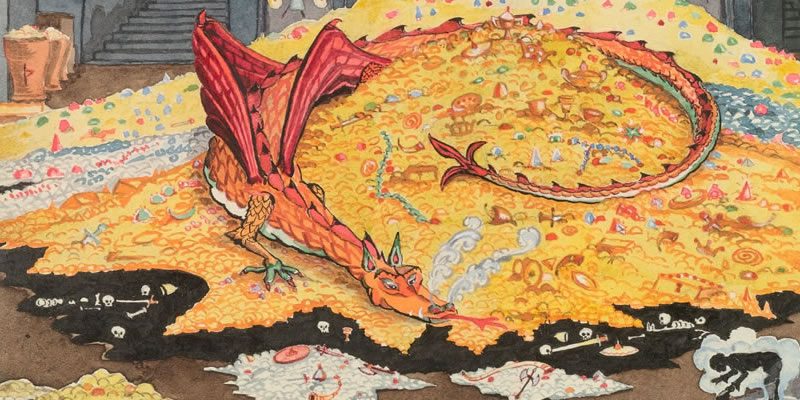 Glistening piles of coin, an enchanted sword shining with elvish runes, a trinket stolen from a dragon’s hoard, all of these things are treasure to your players, and they are vitally important to making a storyline set in a fantasy world dynamic. This week, we are going to put treasure in the Eye of the Beholder, and discuss when, and how, to give it to your players.

Not all that glitters is gold.

The first, and most common, type of treasure is money. Usually in the form of coin, (although trade bars and other mediums of currency exist) money is what makes the world go round, even in fantasy settings. Your players need a steady influx of coin if they want to purchase things such as resurrections, the soon to follow magical items, potions and other adventuring needs that require money. So my first tip when it comes to coin is easy – make sure your players get it. When I was a newer dungeon master, I often made the mistake of giving my players too little gold while focusing on big, splashy magical items. This is a common mistake amongst new dungeon masters, and I would encourage you not to make it. Gold is a resource for clever problem solving, often provoking players to look for unorthodox NPC help, or having them purchase items that help them get around problems in unique ways. As an extension of that, it makes for good storytelling. A stingy player, afraid of holding on to what few coins they have, won’t go to the bar and poke around for rumors, buying drinks for the locals. Obviously, you don’t want to have your players being absurdly rich, but finding sums of money should be part of adventuring, not a rare happenstance.

My second piece of advice addresses a question you may have had above – What if my monsters don’t carry coins? Let’s say your PCs are taking down a pack of Dire Wolves, and you obviously can’t give them treasure directly from the wolves. Well, there are a number of very simple ways around that problem. First, the most simple way is to have a bounty posted on the wolves, and the bodies of the wolves could be met with cheers and coin from local villagers. Perhaps, however, your players have accidently stumbled upon the den of the wolves, and there isn’t a nearby village. Not a problem, simply have the wolves feeding on the corpse of another unlucky traveler, who happens to be carrying the appropriate amounts of coin.

An often unused technique that you can employ when giving out treasure is storytelling through coins. It is easy to tell a story with an art object, or a magical item, as discussed below, but coins can tell a very interesting story too. When the coins the assassin who killed the king has are minted in a neighboring country, you know exactly where to start looking for vengeance. When the players find a cash of Waterdhavian gold in the plateau of Thay, they might wonder what such gold is doing so far away in an enemy country. These are simple hooks to start small adventures, but they can be an excellent way to slay two birds with one easy stone. If you want, this type of localized coin can even rebound on the adventurers, causing them to be the target of suspicion when they try to peddle their coins from an enemy country – obtained on an adventure- in a foreign land.

One great part about character progression in a roleplaying game is improving your character through possessions gained over the course of adventuring. Magical items play an important role in the balance of a character- characters of a certain level are expected to have found items of various strength and usefulness, and this was taken into account when designing monsters. Even more importantly, magical items can serve as a reminder for how a character progresses to your players. After all, experience points can feel very insubstantial. Adding numbers to a character sheet often has a very different feel than hefting the ancient dwarven hammer you just pried out of a centuries-old tomb. However, a few things are important to consider when adding magical items to the treasure your PCs unearth.

Another important thing to consider, aside from the above points about the distribution of magical items in pre-existing treasure hoards or in the hands of enemy NPCs, is the purchasing of magical items. This should be a rare occurrence in your campaign, most of your player’s magical items should come from the adventures they participate in. Why? Because of the shopping list syndrome. Players will look up which magical items they most want for their characters online, then the next time you play, they will approach the shopkeeper and happily ask them for a specific item. You should be wary of this type of behavior, and not give the players their perfect items for their build for the measly price of a few thousand coins. Even if you decide to have shops stocked with magical items, make sure you know exactly which items are in stock, and make the list small, because even if players aren’t bringing online shopping lists, they will approach shops and expect you to have a complete inventory of items for purchase. Don’t let players hound you into making items that you don’t want purchasable into a quick trip to the store. Players will appreciate valuable and rare items like bags of holding much more if they have to work for them.

The final, and most ignored, type of treasure comes in the form of gemstones, art objects and trinkets, small magical items that have no real affect on combat, but can still have an interesting impact upon the game. My advice concerning these is simple: use them. Unlike the often overused magical items, art objects rarely get any love. When you place elaborate paintings in your wizard’s dungeon, you are presenting an interesting choice to players. Do they carry the tapestry, possibly magical and probably worth a great deal of coin to the right buyer, out? If so, how will they carry it while fighting? Is it trapped? Questions like these are what make art objects fun and interesting, a great way to break the mold.

As far as  gemstones are concerned, don’t just randomly put them into treasure hoards unless you have a reason to do so, such as a dragon’s hoard. Instead, use them as small, compact, but expensive treasure. Coin is bountiful, but each piece is worth little in comparison, so it can often be a hassle to carry forth from the dungeon. Gems make excellent bait, used in the eyes of statues that come to life when you steal their gems, or as the focus for a ritual the players are seeking to disrupt. Whole adventures can be built around the pursuit of expensive gemstones, and they are love of merchants and wizards both.

When it comes to trinkets, I have not much advice other than to use your own. Make them small bait for adventures, or as amusing tales for players to remember sessions by. Even more amusingly, small magical items might have players excited over their secret natures and hidden powers. Who is to say the elven toy isn’t really a wondrous figurine of great power? You can easily draw upon the table in the dungeon master’s guide, or the one for the Elemental Evil storyline, but it would behoove you to ensure they are setting specific, just like the magical items.

I have more I could say about the application of magical items, and I suspect I will do another piece on it in the near future, but that is the end of my article for this week. I apologize to the readers for its delay, I was sadly caught up in real life for a time. Until next week, when I hope to see you again in the Eye of the Beholder. Thanks for reading!

Lord of the Deep: Dire Stomatopods for ...