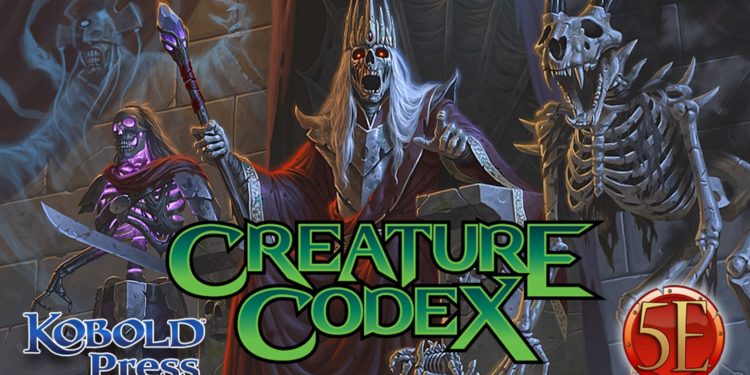 Just like the Tome of Beasts, this Creature Codex looks just like what its name says: A huge codex full of creatures. When it appeared on Kickstarter I pledged for it and have now got the physical and PDF versions to talk about. I’ve also tested some monsters for them (but didn’t end up on the book).

As I haven’t got the Tome of Beasts yet, I won’t be able to compare the two of them as much. However, I made sure to read some reviews and watch videos about it to have a general idea on how it is to give you a better comparison.

I can’t speak for the Book of Lairs and the Pawns one as I didn’t get them, but I’ll do my best to give you my opinion about this great book: 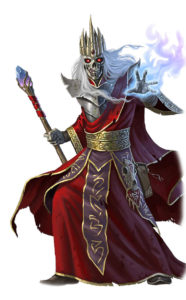 The Creature Codex is absolutely gorgeous when it comes to its pieces of art. The illustrations are all fully colored and use a great portion of its pages. If you have the Tome of Beasts, these images are about the same size or a little bigger, while not becoming a bother when reading the stat blocks.

I’ve heard on an interview with Wolfgang Baur (its lead designer), that he wanted the monsters to appear big enough in the book to be easy for the DM to show them to the players, and I can confirm it does so stupendously. It also works for when you are skimming through the book to find interesting monsters.

What’s more, they also ended up removing the big images that were in the background of its monster pages (with low opacity so you could easily read the text). These were used in the Tome of Beasts, and in my opinion, the new look achieved with the Codex looks way better, giving it a minimalist look.

If compared with the Wizards of the Coast’s Monster Manual or with Kobold Press’ Tome of Beasts, you will find that this new book has fewer monsters. Don’t panic though, as the number is still enormous (422 if I counted correctly, taking into account the NPC Codex).

You’ll find a huge catalog of monsters, ranging from urban legends (the Chupacabra, Baba Yaga, Wendigo) to things you’ve never seen before, as well as from cute adorable animals I would totally add to any children game for them to adopt (Foxin, Kitsune, Ratatosk, Simurg, Wind Weasel, Wolpertinger), to the “WHAT THE **** IS THIS KILL IT WITH FIRE” category (Ahu-Nixta, Goliath Longlegs, and some oozes come to mind).

It expands on categories where the Monster Manual didn’t as much, while not adding many more Fey creatures as the Tome covered it hugely (29 in CC, while the Tome has 50+). The Creature Codex also added some new things, such as the Animal Lords which I find awesome. These are humanoid versions of different animals with great power, all of them with CR 11+.

As regards the difficulty level or the CR being way off like some people say the Tome has, I found that these monsters, while being more dangerous than the ones from the WotC Monster Manual, are more balanced or spot on with the CR than the ones from the previous book. This might mean they learned from past mistakes and/or their playtesting team was more prepared.

If you are running Out of the Abyss, you could even replace some demons/demon lords with the ones from this book, Chittrk’k, Demon Lord of Rats being my favorite.

Other notable mentions include: 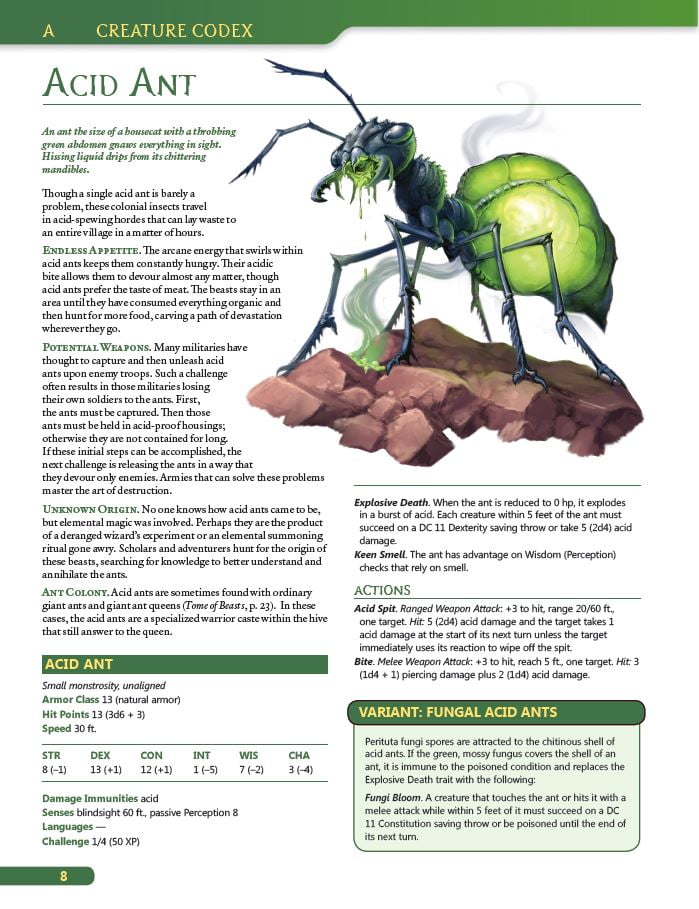 The book consists of one or two pages for each of their monsters while having also some lesser ones appear in one only page. You can find this on the Golem section for example, where there are 4 of them divided into two pages.

Each monster starts with a description you can tell your players when they first see the monster. However, I’ve realized that not all monsters do have these kinds of descriptions. The one found on the Agnibarra, for example, describes the beast reacting to a specific scenario, rather than telling its looks and its fearsome smile when looking to the players. After that, you will see texts describing how these creatures normally behave and live, as well as how they react towards specific things. These give the DM a huge help for roleplaying or creating scenarios with them.

Just like with the Monster Manual and Tome of Beasts, they decided to stick with the monsters being ordered alphabetically, while having some charts at the back to look for them by certain characteristics. They have added a new Location chart to help the DM easily find the monster for the place the players are getting into.

An extra supplement for the NPC stat blocks was added, named the NPC Codex. This is super useful for when your players decide to attack or confront an NPC you didn’t plan them to combat. You just search the closest thing to describe that character, such as a Doomsayer, Battle Mage, or War Priest, and use its stat block.

Whether you are getting it in digital or physical format, you’ll most likely end up impressed by its quality. I wanted to add some details that surprised me from each of them below:

Its physical version is enormous, showing it is truly a codex. The hardcover material seems top notch to the touch and far more resistant than the ones from Wizards of the Coast. Its cover art is beautiful and something you could proudly display if you wanted to. Last but not least, its page material feels really nice to the touch and super high quality. It doesn’t seem like something that would break anytime soon.

Its digital version, on the other hand, doesn’t cease to amaze either. When using a PDF reader, you can access the markers for easy access to every monster, separated by their respective initials. It can also be used to print a specific page of the monster you will be using in your game so you don’t need to be carrying the Codex around. The only thing I didn’t like about it is that both its covers are WAY bigger than the rest of its pages, making the PDF readers always start with the monster pages really zoomed out. 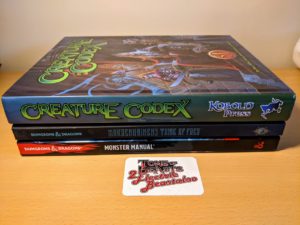 Being this great book from the creators of the Midgard Campaign Setting, they added some beasts that are normally only seen in that setting. Just like that, some creatures do speak Void Speech and Umbral, which are new languages from that same campaign setting. This, however, can be easily modified as it says at the start of the Codex to adopt the creatures to your home campaign.

This has quickly become one of my favorite D&D5E books and my favorite 3rd party supplement no doubt. If you are looking for tougher monsters than the ones the WotC Monster Manual provides, or want to increase the range of monsters to choose from, this one is an easy choice. Moreover, if you were looking for a bit more of what the Tome of Beasts offered, you shouldn’t be looking any farther.

With the great number of high-quality people working on this product, I couldn’t expect any less. What’s more, they surpassed my expectations! Now, we only have to wait to see what other outstanding product they reveal next (Monsters’ Encyclopedia maybe?).

What do you think of the Creature Codex? Which is your new favorite creature and why? And how do you think its next book of this kind is going to be named? Let’s discuss in the comment section!

Unearthed Arcana: Of Ships and the Sea ...