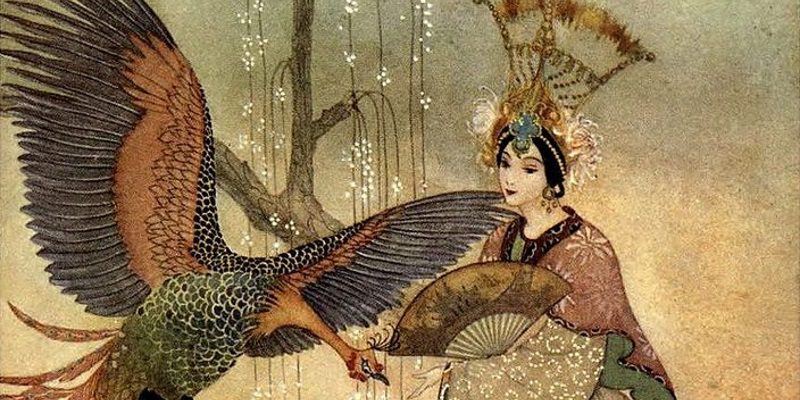 I was overturned last week on my plan not to write a second post about the Sha’ir. I could have resisted writing about the 3.5 Sha’ir, by Dean Poisso in Dragon Magazine Issue 315; the 4e Sha’ir from Heroes of the Elemental Chaos was quite another matter. I am the humble servant of my tyrannical gentle readers, after all. Let’s do this.

This update minimizes changes to the class… necessarily magnifying the changes that are there. Since this is Third Edition, the designer has both the Sorcerer and the Wizard as baselines, and establishes the Sha’ir as a Charisma-based caster. It’s a lucky thing too, because Diplomacy checks now stand in for the most critical d100 rolls of the 2e version. This is not better. This means that your two precious skill points per level have Diplomacy as a skill tax just to play your class, and you’re making a bad mistake not to pick up all of the Diplomacy-improving feats you can find.

Look, Diplomacy is already one of the skills in 3.x that breaks the game if optimized and used aggressively. Rather than rehashing this, let me just point you to my comments on the 3.x Bard.

Moving on. Sha’ir have as many spells per day as a specialist wizard (which is to say fewer than sorcerers), but more spells known than a sorcerer. Except, of course, that the difference between a spell they “know,” a spell they don’t know, and a spell they can never know is retrieval time and difficulty. To put this a different way, the 3.5 sha’ir is a wizard/cleric with a very complicated set of spell-preparation rules (two rolls per spell), a chance to cast spells of unusually high levels, and no ability to prepare several copies of a single spell. The time tracking that this calls for is a real pain also.

Let’s try some math for a third-level sha’ir, Prospera. Charisma 18, 6 ranks in Diplomacy, +4 from synergy (good luck getting Knowledge – Nobility with a sha’ir), +3 from Skill Focus: Diplomacy, +2 from Negotiator, +2 from being a half-elf: +21 for all Diplomacy purposes. Now we apply special modifiers for spell retrieval: +3 for being third level. Using this handy-dandy +24, our sha’ir decides to go nuts and try her hand at, I dunno, raising the dead. So that’s a -10 for spell level and -6 for being divine-only. That’s still a net +8 against DC 20, or 45% success chance, before we even start looking around for spells to improve Prospera’s skill check. Of course, it isn’t quick – this takes 1d6+5 hours, during which time she can do anything that doesn’t require the gen’s presence.

I don’t know why it didn’t occur to me before writing this article, but Prospero is totally a sha’ir in function. I love that.

Another thing: if a Diplomacy check, using Charisma, can give you spells of higher level than you can otherwise cast, you’re benefiting from high Charisma even more than other Charisma casters. A +4 cloak of charisma, for example, gives you +2 to Diplomacy checks, canceling out the penalty of another spell level higher; it also improves slots per day and saving throw DCs as with all casters. Can we agree that this is just frickin’ crazy? To put this problem another way: what’s the absolute earliest you can put together a +40 bonus with Diplomacy + sha’ir level? Because that might be the “best” way to cast 9th-level spells. If you can pick up Diplomacy faster than 2 points per level (one from skill rank and one from sha’ir level) in some other class(es), congratulations, you’ve broken the sha’ir class.

Anyway: some part of the game loop of spell retrieval needs some radical simplification, because success is usually not all that interesting and failure is never interesting, so it’s busywork for that player that will occupy a disproportionate amount of table time. Sha’ir get other features also:

The net result here is a surprisingly faithful adaptation of the 2e rules, with some meaningful changes in spellcasting function to make them more playable; those changes both don’t go far enough and introduce excessive complexity and data tracking. Aside from those problems, this Sha’ir isn’t bad, though I think (as in The Tempest) it would be a lot more compelling if all of the spellcasters in a setting were Sha’ir.

Many of the not-quite-a-rule drawbacks and catches of 2e Sha’ir are not mentioned here – a trend that continues throughout 3.x, of course, as the game doesn’t set out to teach DMs how to turn PCs’ class abilities into liabilities. There are also no rituals to improve one’s gen, because 3.x wasn’t about one-time challenges (no matter how nearly impossible) to gain permanent combat buffs.

It’s obvious enough that Poisso didn’t set out to expand or explore sha’ir class theme here. He wanted to be as faithful to the original as possible while cleaning up some of the mechanics, and that’s a fine decision. That brings us to 4e and Heroes of the Elemental Chaos.

A class with as specific of a theme and set of abilities as the Sha’ir can’t help but be weird in 4e, where they figured out that pet classes are really hard to balance. This is your only warning: I am a punning genies (but humble) and I’m gonna sha’ir everything that comes to me. Ifrit bothers you, tough luck!

The good news is that sha’ir spellcasting makes sense and isn’t incredibly burdensome anymore. They aren’t marid to making you send out your gen for every spell you cast. Instead, your gen grants a couple of minor abilities, and otherwise acts as a vehicle for cycling out your utility spells or daily attack spells. This is cool, but you need a working knowledge of every qualifying wizard spell in the game to make good decisions. Considering the 4e content bloat, this means keeping the Character Builder open on a computer in front of you during play. So it’s only slightly burdensome. I’m a little sad that they didn’t leave the door open to picking up a limited number of spells or prayers of other classes, because the 2e and 3e sha’ir occasionally cast outside their core list, and it’s part of what makes them great. Stat dependency would make that a lot less appealing for anything but utility powers, though.

The gen themselves are pretty cool. As every schoolchild knows, a gen is a spirit made from juniper ber… no, wait. It’s an arcane familiar that can be the point of origin for a close arcane attack power (point-blank AoEs, for those of you who don’t speak 4e) once per encounter, and grants one constant power and one intermittent power. These abilities are pretty good, though they add a lot of complexity in terms of tracking zones (the daolinan causes both you and itself to radiate difficult terrain, for example) and just remembering to add the damage output (the efreetikin splashes some fire damage when you use a daily attack power). It’s the core challenge of resolving 4e, though, so dao not look surprised.

The other significant class feature is Elemental Resistance, which is here to remind you that Constitution is your secondary stat. Your gen shares resistance with allies adjacent to it, including you… and much like the shaman’s spirit companion, this means paying even more attention to positioning and remembering to subtract an amount from some kinds of incoming damage. I’m efreet that this is exactly the kind of thing that drove me away from 4e. They could have gotten the theme across just fine by giving just the sha’ir resistance, and possibly a defense boost, against an energy type that the sha’ir chose each day.

You have to take the Favored Sha’ir or Prince of Genies Paragon Path to continue getting thematically-relevant powers. I almost missed both of them, until I polished up and lit this old lamp I found…

Favored Sha’ir brings back travel to the Plane Below (the Plane Below is approximately the Inner Planes of earlier editions) to recover. Your gen improves your action point expenditures, and you finally get to summon some very serious murder genies. The thematic shift is thick on the ground here: the genies that so disdained 2e sha’ir send in shock troops as a daily power in 4e. (Unleash monolith is djinnuinely awesome, is what I’m saying.)

Prince of Genies is great for sha’ir who thought Craft Genie Prison was the hotness. You establish control or friendship with an elemental spirit in a bottle, and get phenomenal cosmic powers from it. All you have to do is figure out how to free it… and obviously that’s not intended to happen until the end of the movie 30th level, because then you’d have no Paragon Path. But let’s not get bogged down here. You get two different powers based on the genie unexpectedly exploding out of the bottle. I would totally explain the dazed (save ends) of Genie’s Gift as the genie creating big flashy illusions and doing some crazy impersonations that everyone stops to watch. We miss you, Robin.

The other power it grants is limited wish, and if they’d left this out of both Sha’ir-flavored paragon paths, I would be calling shenanigans on the whole affair. It’s a nicely versatile power, though much more limited in 4e than editions prior. It’s a nice thematic finishing piece on the paragon path’s concept. I do think it’s a shame that neither of the epic destinies of this book expand on Sha’ir themes.

I’m impressed at how the 4e Sha’ir comes together to present the class I’ve come to know from 2e and 3.5. The 4e framework is less limiting than I would have expected, and changing things so that the gen doesn’t have to go fetch every spell individually is just a massive improvement – one I will definitely keep if I write my own 5e subclass.

Neither the 3.5 nor 4e write-ups offer any particular support to my point about minor parallels of theme between the sha’ir and the warlock. Even so, I feel like the 5e Warlock is just as compelling of a primary class for a Sha’ir subclass as Wizard… or maybe Aladdin the poetic roots of the mythic sha’ir and choose Bard? I mean, “my gen gave it to me” is a great justification for extra, or variable, Magical Secrets.

Thanks for coming along on this trip through the Sha’ir class, which I once, so foolishly, believed would be but a single article. Now just use your last wish to free meeee….

Rodney Thompson is Leaving Wizards of the ...