After playing Dungeon Crawl Classics RPG, I starting to fall in love with the magic system. Casting magic in DCC can be unpredictable, dangerous and very powerful. And with great power there are also negative aspects like spell burn, corruption, misfires, and other nastiness. And then I started to think that I could start adding some of this in other game systems. Specifically the one that we are playing. I want to start out slowly, first by adding Mercurial Magic to the spells that are cast, and then add the other aspects of DCC spell casting. It will definitely make casting magic interesting, and might cause some things to become overpowered, but after-all it is just a game. So if you want to add a little craziness to your game, then the first step you would need to make is to add Luck. Luck is used for Mercurial Magic and can also be used in other aspects of any game. Luck is a score that will be needed for each character, and is easy to add if it missing from your role-playing game.

If Luck is missing from your game, then each player will just need to roll 3d6. The result will be 3 to 18, and then permanently added to that character. It can’t be modified, and that is the character’s luck score for the remainder of the game (unless you are playing DCC then it can go up and down). A plus/minus modifier is then determined from your Luck score. Here are the modifiers from the d20 system that we are using, but you can tweak them however you want. As a comparison, I’ve also added the DCC modifiers: 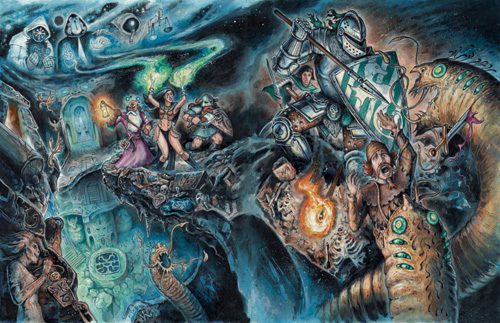 From there, when ever a person first casts a spell, they would roll d100. From that d100 result, Luck is needed because the resultant roll is modified by the Luck modifier (Luck Modifier x 10%). So a LOW Luck score of 3 would give a -40% to the result of the d100. A HIGH luck score of 18 would give a +40% on the table.

Compare the result to the five page Mercurial Magic Table that can be found in the DCC RPG Rule Book on pages 111 to 115. A result of 41 to 60 allows the spell to be cast normally. But outside of that, there are many different effects. Here are just two examples from the Mercurial Magic Table;

A result of 40% would cause the spell to cause Ravenous. Your wizard becomes ravenously hungry after casing the spell. Hungry people are often cranky, so the wizard suffers a -2 Personality until he is able to eat. [For our d20 game we would use Charisma instead.]

Or a roll of 91% the spell will cause Breath of Life. Casting this spell imbues the caster and those around him with beneficial energies. All within 15′ of the caster (both friend or foe) are healed 1d6 points of damage for every level of the spell (3rd level spell grants healing of 3d6 damage).

The results would occur each time that the player casts that spell. The effect varies for each player who casts the spell, and makes magic more personable. It can make the spell more powerful, different, as written, or harmful to the caster. Now in Dungeon Crawl Classics there are dice chains that improve or hinder chances on success. This can be adapted in the d20 RPG system I am using by adding a modifier (-2/+2) for 1 dice step change, or adding advantage/disadvantage for 2 dice chain steps.

I think there are benefits to injecting the Mercurial Magic system into my current game. And if you get the DCC book and want to play, there are a lot of resources that can be found out there, and the best one that I’ve found so far is at Purple Sorcerer, and another one that is very useful is Basement and Drakes. So let me know what you think, and have some fun!