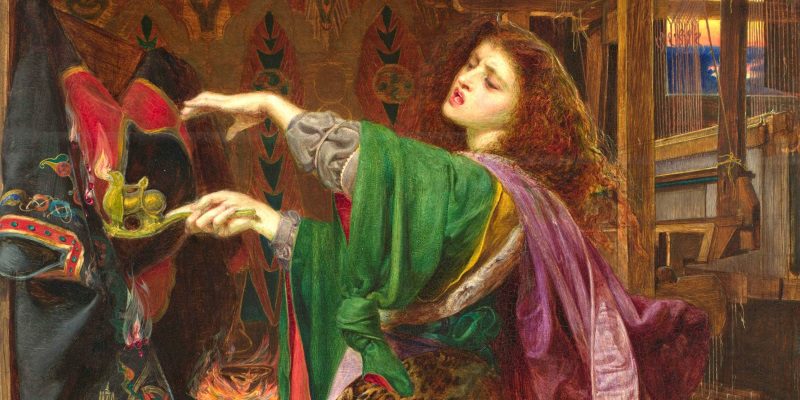 Now that my series on the Sha’ir has ended… again… I’m moving on to the Warlock, a class that first formally entered D&D in 3.5e in the pages of Complete Arcane. It has undergone radical changes in mechanics from that publication in November of 2004 to its 5e incarnation, released in August of 2014. Some of the words used have survived, though they often mean different things. Thematically, the 3.5 warlock is still present in 5e, but between 4e’s builds and 5e’s subclasses, there are many alternate themes bouncing around within the class as well.

Right off the bat, the Warlock looks nothing like the other magic-based classes, because they never expend anything that won’t come back at the start of next turn. When I first saw the class, lo those many years ago when the world was young and Complete Arcane was written on the finest vellum by the steady-handed Monks of the Coast in Renton Abbey, under the stern and watchful eye of Abbot Richard Baker, I was shocked and dismayed. In what world could an at-will ranged touch attack that scales up to 9d6 damage be reasonable – to say nothing of what happens when you pile on one of the eldritch essences to modify it?

The fact of the matter is that a base average of 31.5 damage is all right at 20th level, but if you compare it to what other characters are kicking out, you’re probably left thinking how nice it would be to have a consumable resource that let you do more. That said, the conditions you can inflict with eldritch essences are solid; you might not lead the DPS charts (please tell me your tabletop game doesn’t actually have DPS charts, I really want that to be a joke), but debuffs are a great way to make an opponent less threatening.

A warlock needs Charisma for saving throw DCs, Dexterity for eldritch blast aim, and Constitution for the same reasons everyone needs Constitution. They are among the few arcane magic types who can use even light armor in 3.x, creating a lot of potential synergy for multi-classing into Rogue. Warlocks have a broad list of class skills, at 13, but only 2+Int skill points, and they’re probably doomed to a low-to-middling Intelligence score, so they’re not likely to get much use out of that hefty list. Just like every other spellcaster, warlocks need lots of ranks in Concentration, though at least if they get disrupted, they don’t lose any resource other than their action for the turn.

I’ve already mentioned the scaling of eldritch blast. To go with that, Warlocks get invocations, which are a character building currency, halfway between feats and a Sorcerer’s Spells Known. The first invocation comes at first level, scaling up to twelve at 20th level. Invocations range from those sweet, juicy eldritch essences and blast shape invocations (why yes, I would like to turn my eldritch blast into a cone that inflicts two negative levels), to at-will spells like shatter, or passive bonuses like a +6 to Bluff, Diplomacy, and Intimidate. That’s a pretty convincing way to shore up not putting any skill points into those skills, I’d say.

Invocations have power-level descriptors governing when you can pick them, and it works out to three least, three lesser, three greater, and three Dark invocations, though you can always “spend down” if you want. The respend mechanic for invocations is quite generous, so you can experiment with different combinations without getting locked into anything. With twelve wild-card class features, the warlock can be a lot of different things, though the overall range here is narrower than we’ll see in 5e.

Beyond these two central features, the warlock has a few other abilities:

That’s about it for class mechanics. There are kind of odd rules for prestige class qualification: if the prestige class requires spellcasting level (that is, able to cast spells of 3rd level or higher), the warlock can never qualify, but if it requires caster level, they’re fine. It seems like a fine hair to split, but it’s something that the prestige classes of Complete Arcane observe scrupulously. I like that there’s a chart summarizing CA’s prestige classes, including a note of which ones are a fit for warlocks. As with any prestige class, you really need to know in advance that it’s something you want to do so that you can satisfy the arbitrary prerequisites.

A significant mention goes to the Acolyte of the Skin, which is just as gross as the name makes it sound. This prestige class is a logical spinoff of the warlock, heading in a more purely fiend-focused direction and picking up special abilities, at some cost to the eldritch blast and invocations. There are other pretty-good thematic and mechanical pairings, but that one is about perfect aside from its rather steep cost.

The Warlock class write-up goes into detail about what warlocks are like and how they came to be warlocks. It includes several notes of “other ways are possible too,” but the default is that you or one of your ancestors entered into a compact with a fiend of some description. Even if it wasn’t your doing, you’re still stuck with “any evil or any chaotic” alignment. Even within the brief discussion of Warlock alignments, it’s clear that these restrictions do a poor job of covering the types of character concepts the game sees as viable: “A good-aligned warlock is a grim and fearsome enemy of evil” could describe many paladins just as well as it does warlocks, and there aren’t any valid legal structures for unwillingly profiting from something that your distant ancestor did.

The Warlock is certainly in the top three most angst-ridden base classes in 3.5, and possibly in all editions (though 4e’s Heroes of Shadow really outdoes itself). All of the suggested backstories drip with it. Who do you think you are, Sergeant Tamora Jean Calhoun? Whatever the exact source of their power, they’re always feared and misunderstood. So misunderstood.

There’s a single line discussing non-evil powers that might create warlocks: “wild or fey forces.” There’s absolutely nothing on the mechanical side to reflect this idea, but it’s interesting that it’s present at all, because 4e and 5e double down on this. Considering how much 3.5 added to the Far Realm, I’m surprised there isn’t more Great Old Ones influence going on in this Warlock. What we have here is a class that can be any flavor you want, as long as that flavor is fiend or generically evil.

What is the warlock that is not the warlock? It is the Binder, a late-stage 3.5 class that introduced Pact Magic to D&D, and you’re getting a rundown of it as Ultrafun Bonus Content. Tip your servers, try the veal. This class appears in Tome of Magic, published in March 2006. If you look at the Warlock as one end of a spectrum and the Sha’ir as a midpoint, the Binder is the thing way down at the other end of that line that is mucking around in the same themes, but it is as transitory in its connections as the Warlock is permanent. It’s also necessary to mention the Binder here, because its concepts get repackaged as a Warlock build in 4e.

This results in a roll-your-own kind of class that can be a dedicated healer one day and a fighter in heavy armor (with the hit points to match) the next. Particularly in the last few years of 3.5’s active development, there are a number of classes with such radical variation; the Factotum from Dungeonscape and the Incarnate, Soulborn, and Totemist from Magic of Incarnum all come to mind. In a sense, each in-game day might be a new negotiation as to who in the party plans to fill each combat role.

The Binder conjures entities called Vestiges, which are strange extraplanar entities that… you know what, it’s hard to describe them categorically. They’re “outside the reach of the gods” for reasons that the text avoids nailing down. The lore here is bizarre and cool, and I had an idea that would anchor a whole campaign while reading about them. I’ll come back to that. A pact with a vestige lasts for a day and grants four or so abilities, which might be anything from weapon and armor proficiency to a breath weapon to at-will healing. Vestiges are rated more or less like spell levels, from 1st through 8th, and you gain access to them progressively. You also gain the ability to bind more than one vestige, eventually hitting four at once for quite a varied raft of abilities (but then it would have to be, to match any other 20th-level character).

With a d8 Hit Die and proficiency in just simple weapons and light armor, you’re the most default of all characters until you bind a vestige. All ability scores might wind up being useful, but the class recommends Charisma (for improved binding) and Constitution (presumably for improved survivability while you figure this class out). Like the Warlock, the class skill list is thirteen skills with just two skill points per level.

Other than a few bonus feats, the Binder gets two more abilities influencing what they gain from vestiges:

The text doesn’t mention that it’s pointing vaguely in the thematic direction of Vodou, but that might be the closest mythic touchstone, as some Vestige bonds cause changes in your personality. Many of them also alter your appearance. The class’s abilities don’t communicate all that much theme, in the same way that the 3.x Wizard’s abilities do not. On the other hand, both the Binder’s Vestiges and the Wizard’s spells are dense with theme and story hooks. You can get most of the way to imagining what goes on with a Vestige if you pick four spells or abilities at random and write a vignette explaining their connection – and if you’ve never done that, it’s an awesome idea mine, especially if you’re better at it than I am.

The Vestiges clearly aren’t exactly alive… nor dead, nor undead. Some of them are, or were, mortals; others were gods, and others were entities from the Far Realm. I’m sure there are any number of things you could do with this, but it makes me want to put all of the Vestiges on equal-ish footing in a city teetering at the edge of cosmic oblivion that is one part Casablanca, two parts Callahan’s Crosstime Saloon, and i parts… I dunno, Carcosa or meta-Sigil or something. (So, Al Amarja.) The PCs, who are mostly confined to the real world, occasionally peer through into the city of the vestiges, and at climactic points in the campaign get pulled through to protect it from annihilation. I would probably drop the major theme of tension between binders and divine-based classes, because (especially after reading the Warlock) that strikes me as simply tedious. Probably the most interesting context for Binders and Vestiges is when they’re the entirety of mortal-accessible magic.

Fortunately for everyone, WotC realized that they had some evocative content here, attached to a strange little class that a relatively small percentage of their audience had seen, so they reintroduced the concepts in 4e; that will be part of next week’s article here in History of the Classes.